Friedersdorf (Spree) is part of the municipality of the town of Neusalza-Spremberg in southeast Saxony near the border with the Czech Republic in the district of Görlitz .

The Friedersdorf district is located in the south-western part of the Görlitz district. It is located approx. 2 km northwest of Ebersbach / Sa. in the Lusatian highlands . The (Dresden-Stolpen-) Neusalza-Zittauer Landstrasse, today's B 96 , laid out between 1835 and 1836 , runs through the municipality and the border with the Czech Republic runs south of the town. The community is located on the Sohland – Ebersbach section of the Zittau – Dresden railway, which was opened on May 1, 1875 (see: Bischofswerda – Zittau railway ). The Spree flows through the village and, as its southern inlet, the Richterflössel . The Friedersdorfer Wald borders to the north and the Grenzwald to the south .

Several mountains line the Spree valley in which Friedersdorf is located:

Friedersdorf was first mentioned in a document on January 21, 1272. At that time with the names "Friderichstorf" "Vrederichstorp", "Vrederikistorp", named after a locator Friedrich, later (1360) "Friderichstorf", 1397 "Frydrychsdorf", 1408 "Fridrichsdorff", 1419 "Frederßdorf inferior", 1430 "Frederichsdorff", 1503 "Friderßdorff", 1567 "Oberfriederßdorff" and 1580 "Niderfridersdorf". Friedersdorf was laid out as a Waldhufendorf by the settlers along the Spree Valley in the course of the feudal German expansion to the east . In other words, the parcels (= forest hooves) were perpendicular to the Spreelauf in the direction of the forest. However, there are first settlements from the Bronze Age . Until the end of the 15th century around 1490 (division between 1489 and 1493) Friedersdorf was a place, then it was divided, and it was only reunified on April 1, 1938. The Gasthaus Grenzschänke from 1768 refers to the earlier dividing line. In the meantime, Oberfriedersdorf had belonged to the city of Zittau since 1597 , while Niederfriedersdorf was in noble hands. Friedersdorf was predominantly a farming village, with craftsmen added later and house weaving in the 17th century, but this trade was replaced by textile factories. In 1877 Hans Leo von Oppell acquired the Niederfriedersdorfer manor and had a new castle built as a mansion. The place became a village of factory workers, but not an industrial village. Smaller companies settled there, such as the paint factory, which produced school paints in GDR times, and a button factory. 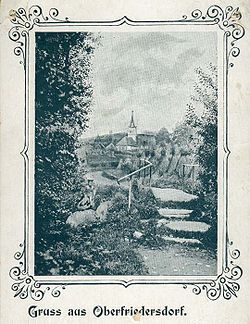 In Oberfriedersdorf there had been a post office since April 16, 1898, and a telegraph company and public telephone station there since August 20, 1899. The districts Hempel and Viehbig belonged to the municipality of Oberfriedersdorf.

Oberfriedersdorf as a Waldhufendorf had an area of ​​approx. 386 hectares in 1900.

Niederfriedersdorf as a Waldhufendorf with districts had an area of ​​approx. 704 hectares in 1900.

In 1777 the manor owned the Niederfriedersdorf manor.

Niederfriedersdorf was pastured to Spremberg in 1580 and belonged to the Friedersdorf parish from 1930-2001.

Landlords and their owners

Until the end of the 15th century, the manor in Niederfriedersdorf belonged to the whole of Friedersdorf, from then on only the lower part with the Vorwerk , since 1690 again a part of the upper part.

Owner of the Niederfriedersdorf manor since 1392:

From 1880 onwards, extensive renovations and new buildings were made in the area of ​​the estate:

Friedersdorf has a local council. The mayor is Günter Hamisch. He is considered to be the intellectual originator of the cross-border association of German and Czech municipalities, which is known as the five-municipality . As the mayor of the then still independent municipality, he was co-signatory of the corresponding declaration of intent of the mayors of the five municipalities on May 18, 2002 on the Czech Jüttelberg near the border . Besides Friedersdorf, the mayors Günther Paulik ( Neusalza-Spremberg ) and Karl-Heinz David ( Oppach ) from the German side and Milan Kořínek ( Šluknov ) and Michal Maják ( Jiříkov ) from the Czech side signed the document as members. With the incorporation of Friedersdorf into Neusalza-Spremberg in 2008 and the inclusion of Sohland (Spree) under Mayor Matthias Pilz on May 10 of the same year, the gap in the five-community could be closed. On November 4, 2011, the twin town of Ebersbach-Neugersdorf joined the five -community community with mayor Verena Hergenröder.

Blazon : "Silver-gold divided by a blue wavy bar in the base of the shield, above an uprooted green spruce, flanked by two green ears with golden grains on leafy green stalks."

The coat of arms of the Friedersdorf district was registered and documented in the HEROLD's German coat of arms on December 10, 2012 as the coat of arms of a non-independent district with the registry "5 SN" . It was donated by the local council, represented by Günter Hamisch, in order to use it as a symbol of the local-local identity outside of official acts. The design was done by the municipal heraldist Jörg Mantzsch , who carried out the certification.

The symbolism of the coat of arms is based on a customary, but unheraldic coat of arms, which was once created on one's own initiative and has been in use for around 20 years.

The symbols are explained as follows: The central figure of a conifer (spruce) refers to the natural location of the village in the Lusatian mountains, to which the wavy bar is linked to the Spree, which flows through the village. In addition to forestry, agriculture was the most important branch of the population for centuries; For this reason the ears of wheat were included in the coat of arms, the fields of which are represented by the golden shield base.