from Wikipedia, the free encyclopedia
This is the sighted version , flagged on August 10, 2020 . There is 1 pending change that has yet to be viewed.

GIGA (formerly NBC GIGA and GIGA green ) was a German television program that initially ran on NBC Europe , later on its own channel GIGA and Das Vierte . A special feature was that viewers could take part in the broadcast via the Internet, thus enabling a high level of interactivity.

The program has always been divided into individual subject areas, so-called channels , which were moderated by network reporters and which alternated every five to ten minutes in so-called takes . These were separated by bumpers . Until 2005, so-called hosts also led through the show.

The brick look of the studio was characteristic of NBC GIGA , characterized by a large steel "G", the ceiling cameras that filmed the studio from a bird's eye view at the end of a take, and the bumpers that separated the subject areas.

The program was characterized by convergence : on the one hand, the individual areas merged into a larger whole, which was shown by an overview on the hour. On the other hand, the program structure and content were influenced by audience participation via e-mail, chat and in the forums . The best example of this was the creation of a policy area called Update , after the makers realized in the weeks after the terrorist attack on September 11th that the young target group was definitely interested in political discussions.

Initially there were five areas:

Finally, there were the following four topics: 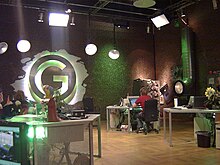 As early as 1995 it became known that the then NBC Super Channel wanted to establish a nationwide computer channel called "GIGA TV" with the German television news agency . These plans initially failed because the cable network monopoly at the time, Deutsche Telekom , was not interested in the feed. The DFA founder and then managing director Helmut Keizer is considered to be the originator of the idea .

When the National Broadcasting Company , the parent company of NBC Super Channel, which has since changed its name to NBC Europe, struggled with financial problems in 1998, the frequency was increased in Germany, Austria, Switzerland and (for a few years) in Eastern Europe sold to DFA, which took the opportunity to get the project off the ground.

The official start of broadcasting was on November 30, 1998 at 3:00 pm under the name NBC GIGA . Broadcasting ended at 8:00 p.m. At that time the studio was in a corrugated iron container at Düsseldorf's "Medienhafen", the New Media Studio .

On May 8, 2000 the first broadcast from the neighboring New Media Center . The DFA rented the entire building on Kaistraße 11, which also housed the editorial office.

A special feature is the establishment of local studios. On August 13, 2001, the first GIGA local studio was founded in Hanover . From an economic point of view, the purpose of this was to make NBC Europe a must-carry in the cable networks . In the course of time, further derivatives were founded in Hamburg , Bremen , Mainz and Saarbrücken , which were regularly added to the coat range from 6:00 pm onwards.

The update area was founded on November 12, 2001 under the name iNews . The aim was to educate the target group about politics, to inform them and to polarize them. On March 25, 2004, the division was spun off as GIGA real and moved to Berlin .

In addition to GIGA real , other offshoots were realized: While GIGA Heartbeat is to be regarded as a completely new idea, GIGA \\ GAMES originated from the afternoon program, as was GIGA Help .

The creation of the area Mlife that the growing mobile lifestyle through mobile phones and laptops with Wi-Fi should antiglare, Sports & Fun and Stars on July 21, 2003 Sports & Stars merged (this step was the outsourcing of update undone, though the fun in Sport & Fun was almost repelled). On this day, the "degradation" was made of Insite -Netzreporterinnen to hosts . The Help area has been renamed from GIGA Help to Helpcenter to make it easier to differentiate . There have been drastic changes in the broadcasting process since then.

On May 3, 2004, the studio was rebuilt: the previous table arrangement was abandoned; since then there has been no characteristic shape.

The program was fundamentally redesigned on March 1, 2005 under the motto “March makes everything new”. The official name of the program was from now on GIGA green - to better distinguish it from the other GIGA formats . Some areas were merged.

At the end of 2004 NBC Europe was taken over again by NBCUniversal , which wanted to occupy the previous cable frequencies with the program Das Vierte . With the exception of GIGA green and GIGA real , all GIGA broadcasts were outsourced to their own satellite channel , which in turn had the purpose of being able to continue to secure the cable frequencies. In order to save costs, the editorial department was moved to Berlin and the transmission time was reduced. These changes took effect on September 30, 2005, since then the main program, which was also renamed GIGA , was initially broadcast from 13:00 to (officially) 16:05 in parallel via GIGA digital and Das Vierte .

In order to be able to broadcast GIGA real in the cable, the transmission time of GIGA was shortened by half an hour; that of GIGA real around a quarter of an hour. Ultimately, however, NBC Universal was able to come to an agreement with the cable network operators to broadcast Das Vierte in the future without a GIGA via cable. The last issue was broadcast on March 31, 2006.

The moderators, known as network reporters , not only guided through the channels , but also wrote articles accompanying the program on the program's website and maintained interaction with viewers. The line-up changed frequently; some presenters began their television careers with the show. Here is a selection of network reporters from the seven years in which the program ran:

The start was laughed at from all sides; The poor camera work and bumpy presentations, which seem to be common with young broadcasters, were criticized as well as the out-of-date nature of the topics. However, these teething troubles quickly subsided and interest in the program continued to grow. The weekly show parodied the show with GAGA as well as Switch .

Interest in the network reporters also grew; In addition to various appearances in shows such as the Harald Schmidt Show (such as in the case of Stars network reporter Emily Whigham ), these were poached by other broadcasters. Uta Fußangel moderated at times on VOX , Kerstin Linnartz on Sat.1 and Tele 5 , Miriam Pielhau on ProSieben , Tele 5 and RTL II and Charlotte Engelhardt on ProSieben. Jana Ina can be found regularly in the tabloid press .

There was no official successor format for GIGA (green) until the television station GIGA was discontinued in March 2009. However, the show SPAM Deluxe , which ran on GIGA from January 2007 to May 2008, again focused on the interaction with the viewers, albeit in a different form. However, SPAM Deluxe was also abandoned in the course of a realignment of the program.

KAI3 , which started at NRW.TV in July 2006 , was largely reminiscent of GIGA (green) , especially since some former GIGA network reporters are involved here. However, the concept was changed up to the point of discontinuation and the show was split up into individual, topic-specific programs.

On June 25, 2007, a daily live broadcast called Mainframe started on the IPTV broadcaster wdwip.tv , which focuses on the interaction with viewers. Some former GIGA (green) presenters also worked here, and the program has now been discontinued.

An official GIGA live stream is planned for October 2011 , which will take place every Thursday and will run for two hours.

In August 2013, a TV show called G-activity was briefly broadcast on the open TV broadcaster NRWision . The project was short-lived, however, and only a few episodes were broadcast before the format was discontinued and went back online under the new name from the same producer a year later. The new Gaming TV Magazine is called #MOREV and runs on the TV channel NRWision (monthly, since 2015), as well as on Amazon Prime Video since 2019 . Behind the gaming TV magazine, MotekTV is the video division of MotekGames, which emerged in 2015 from the gaming magazine G-activity.

The interactive youth channel NIX TV, launched in June 2014, is very similar to GIGAgreen with its first format NIX (Monday – Friday, 8–10 p.m. on NRW-TV). GIGA founder Helmut Keizer is involved in this project.

joiz , which started on August 5, 2013, also had parallels to GIGA, as viewers are heavily involved, but did not deal with video game or computer topics.

Since January 2015, Rocket Beans TV has been a new, continuous (24/7) Internet live channel on Twitch.tv . A. Numerous former games network reporters contribute. Rocket Beans Entertainment GmbH , which previously produced the Game One format for Viacom, is responsible for the production . The main point of the station is a high level of involvement of the viewers, who can actively participate in the broadcast events via a chat and "help shape" the program; in addition, productions by third parties are broadcast. The project is financed by donations from the audience.