Herrenhausen is a redirect to this article. For the district of the same name in the Lower Saxon community of Wiefelstede, see Herrenhausen (Wiefelstede) .

The teardrop-shaped district of Burg is enclosed in the west by the Hanover – Celle railway line and in the east by Burgweg .

In the district there was an eponymous castle, which was first mentioned as Gernandesburg in a deed of donation from 1274. With her, Duke Johann von Braunschweig-Lüneburg transferred the farmyard west of the Gernandesburg to the Sankt Spiritus Hospital in Hanover. Later there was a Meierhof and from 1864 a manor of the Calenberg-Grubenhagen knighthood . The city of Hanover bought the estate in 1914 and some of the agriculture continued.

The central north-south axis Vinnhorster Weg divides the district into two roughly equal halves. The western part is a residential area mainly built with one and two family houses. The streets are named after cities in the Harz, which is why people also speak of the Harz district . The Evangelical Lutheran Zacchaeus Church is located on Harzburger Platz. 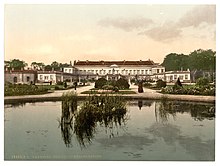 Herrenhausen lies between the Hanover – Minden railway line in the north and the Leine in the south-west; the eastern border is formed by the streets An der Graft and Franziusweg .

The settlement of Hagerinhusen , located on sand dunes on the Maschrand of the Leine, was first mentioned in 1216. The foundation document of the Hildesheim Michaeliskloster , which was burned in 1943, named the year 1022, but it was a copy or a forgery from the 12th century. Herrenhausen's current name prevailed from 1666 onwards, it was based on the summer residence of the Guelphs , Herrenhausen Castle . In 1725 the Herrenhausen Treaty was signed , which was supposed to tie the Hohenzollern and the Welfs together. In 1891 the Herrenhausen community was incorporated into Hanover.

Of the Herrenhausen Gardens , the Great Garden and the Berggarten are in the district, the Georgengarten and the Welfengarten belong to the northern part of the city . The Great Garden is one of the most important baroque gardens in Europe. In the mountain garden includes tropical sea-life -Aquarium in former rainforest house and the Welfenmausoleum as the burial place of the Hanoverian line of Guelph . The gardens include the Herrenhausen Royal Garden Library .

Institutes of the University of Hanover (Faculty of Architecture and Landscape and Natural Sciences) are located in the district. The Goetheschule grammar school and the Wendlandstrasse elementary school are also located here. The Herrenhausen Brewery has been brewing beer since 1868 , the most famous of which is the Herrenhausen Pilsener . The old building of the Leinhausen train station stands on the border with Leinhausen and is now an event center. The EKD church office is located on Herrenhäuser Strasse , and in the district there is also the Evangelical-Lutheran Herrenhausen Church , built in 1904-06, and the community center of an Evangelical-Reformed parish. The Herrenhausen sewage treatment plant in the north-west of the district is responsible for all waste water in the city of Hanover.

Ledeburg is bounded by the Schulenburger Landstrasse and Mecklenheidestrasse in the north, Buschriede and Eichsfelder Strasse in the west and south and the Hanover – Celle railway line in the southeast. The district emerged in the 1920s and is characterized by single and multi-family houses, allotments and sports facilities.

There is a youth center in the district. The S-Bahn lines 4 and 5 stop at the Ledeburg S-Bahn station and provide a connection to the city center as well as to Langenhagen and the airport. Two bus lines complete the local transport offer. The steel construction company Louis Eilers Stahlbau was located on Entenfangweg, and its listed water tower is a landmark of the district. The traditional Waldgasthaus Entenfang has been located north of the former Leinhausen repair shop since 1878 .

Synagogue of the Liberal Jewish Community

Leinhausen lies between the Hanover – Minden railway in the south, the Hanover – Celle railway in the east, Eichsfelder Straße in the north and Fuhsestraße in the west. One of the smallest districts of Hanover was built around the Royal Prussian main workshop in Leinhausen , founded in 1878, as a "residential colony" for the employees there. At that time only railroad workers lived here. The Hanover S-Bahn multiple units have been serviced and repaired on the site of the former repair shop since 2000 . The Fuhsestrasse depot of the Hanover city railway is also located there .

To the north-east of the Leinhausen train station is the Herrenhausen power station , which used to run on coal and was converted into a thermal power station by the Hanover municipal utilities . Of the six chimneys of the former coal-fired power plant, only the bases are left. Today's gas-fired power plant is the neighboring block B, which is noticeable due to its cylindrical design. For a while it housed a fuel cell with an output of a few kilowatts, the research project has now been terminated. The regenerative generation systems in the Stadtwerke network area are also controlled from the control room of the Herrenhausen power plant: Leine hydroelectric power plant Herrenhausen, hydroelectric power plant Schneller Graben , biogas processing plant Ronnenberg, landfill gas utilization plant Hannover-Lahe, wind power plant Kronsberg as well as several photovoltaic systems.

The Catholic Church of St. Adalbert, built in 1958, is located in the district. The synagogue of the Liberal Jewish Congregation has been located in Leinhausen since 2009 and was set up in the building of a former Protestant church. The Leinhäuser open-air pool is located on Elbestrasse .

During the Second World War, there was a concentration camp at the battery factory in Marienwerder , a satellite camp of the Neuengamme concentration camp . Between 1943 and 1945, around 1,800 foreign forced laborers , prisoners of war and prisoners from concentration camps were housed there. In factories of the AFA (later VARTA , now Johnson Controls ), they were forced into war production under inhumane working conditions and suffered lead poisoning . In 1989, a memorial with a sculpture and plaques was erected near the former camp as a reminder.

In the 1990s, several institutes that work closely with the University of Hanover , such as the Laser Center Hanover , were located in the Marienwerder Science Park . By the rail line 4 of the district as well as with the center Garbsen is connected.

The north port on the Mittelland Canal

The district is named after the Midland Canal lying North Harbor . It is bounded by Stelinger Strasse in the west, the A 2 in the north and Schulenburger Landstrasse in the east. The southern border runs north of the VW plant roughly along the tracks of the port railway.

Only about 100 people live in the district, the area south of the canal is characterized by industrial and commercial areas. The 63-hectare North Harbor is an important trading center for the seaport - hinterland traffic . There is a park-and-ride station at the end of tram line 6 .

North of the Mittelland Canal is the Mecklenheide forest area , which in terms of area has the largest share of the district. Between the Mecklenheider Forest and the Stelinger Straße, the Kinderwald project was created on a seven-hectare former fallow land . Since the spring of 2000, children and young people have planted 1,500 trees and bushes with the support of parents and municipal employees. The area serves as a play, relaxation and natural space.

A large part of the storey consists of three to four- story residential developments with large green areas, which were created in the post-war period. One of the streets is Am Stöckener Bach . The largest companies are the Volkswagen plant in Hanover and Continental AG . One of the largest cemeteries in Hanover is the Stöcken city cemetery . Fire and rescue station 2 of the Hanoverian professional fire brigade and the Sami mosque are located in the district . The Evangelical Lutheran Corvinus Church and the Catholic St. Christophorus Church were closed in 2012 and 2019, respectively, so that there is no longer a Christian church in Stöcken today.

The Black Heide settlement area belongs to the Stöcken district and is the only residential area in the district north of the A2 .

In the local elections on September 11, 2011 , the SPD was again the strongest party in the district with 46.5% of the vote and is the district mayor with Marion Diener and the deputy mayor with Karlheinz Mönkeberg. Since the SPD no longer has an absolute majority in the district council and was unable to agree on a cooperation with the Greens, it reached an agreement with the individual representative of the voter community Active for a social Hanover (ASH) . The district council of Herrenhausen-Stöcken meets about eight times a year in public in the Stöcken leisure center.