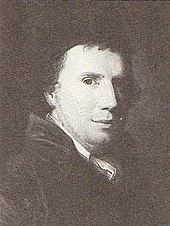 Israel Jacobson ( Isrel ben Jacob until 1808 ; born October 17, 1768 in Halberstadt ; died September 14, 1828 in Berlin ) was a Jewish merchant and banker. He is considered a pioneer of Reform Judaism in Germany. 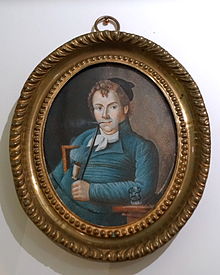 Jacobson was born in 1768 as the son of the wealthy businessman and head of the Jewish community in Halberstadt Israel Jacob (1729-1803). He received a traditional Jewish upbringing and, according to his father's wishes, was to become a rabbi . At the age of 19 he married Minna Samson (December 22, 1767– February 4, 1819), the daughter of the Brunswick court factor ("chamber agent") Herz Samson (1738–1794). After the death of his father-in-law, Jacobson took over his banking business as well as his duties as land rabbi for the Weser district in Brunswick. In this function he was in charge of the protective Jews living in the country towns and villages and was able to use his growing influence through wealth and offices to improve the living conditions of his fellow believers.

Jacobson was very successful as a banker and soon expanded his activities beyond the borders of the Duchy of Braunschweig as a court factor in Baden , Hesse-Darmstadt councilor and finance councilor in Mecklenburg-Schwerin . He made friends with Karl II. Wilhelm Ferdinand, Duke of Braunschweig and Lüneburg, Prince of Wolfenbüttel . The Duchy of Braunschweig was added to the newly founded Kingdom of Westphalia under Jérôme Bonaparte , the youngest brother of Napoleon I in 1807. In 1808, the civil equality of Jews was enshrined in his constitution. Since the kingdom could not repay the loans that Jacobson also granted him, he was compensated with goods from abolished monasteries and branches of the Teutonic Order .

In self-study Jacobson had dealt with Enlightenment writings, among others by Moses Mendelssohn .

As a land rabbi of the Weser district, he was confronted with the desolate state of the Jewish school system and in 1801 built the Jacobson School in Seesen against the resistance of the local Christian population , which in 1804 already had 46 Jewish students. From 1805 Christian children were also admitted, who were taught together with the Jewish children with free board and lodging. The Jacobson School thus became the first simultaneous school founded by Jews in Germany.

In 1810 Jacobson had the world's first reform synagogue ( Jacob's temple ) built on the school grounds . It was equipped with an organ , a novelty at the time. In addition to Hebrew prayers, Jacobson also introduced German-language prayers and sermons here.

Jacobson campaigned for the removal of the regulations discriminating against Jews, but also tried to promote understanding between Jews and Christians and supported those in need of both denominations . It is thanks to his influence that the Leibzoll , a centuries-old Jewish tax, was abolished in 1803 in the ducal Brunswick-Lüneburg principality of Wolfenbüttel . In 1804 he received full subordinate rights there, in 1805 he was granted city citizenship and in 1807 he was awarded an honorary doctorate from the University of Helmstedt . His mission was initially in Braunschweig and Baden , but then especially in the Kingdom of Westphalia. In 1806 he wrote a memorandum to Emperor Napoleon to improve the Jewish education system.

When in 1808 the Jewish religious community (approx. 19,000 people) in the Kingdom of Westphalia was legally equated with the Christian churches , they too received - analogous to the churches of the Reformation - an Israelite consistory as the central supervisory and administrative authority in the French countries . Israel Jacobson became its president. Here he was able to put his ideas about an enlightened, assimilated Judaism into political practice. In the meantime he had moved to the Kassel residence . As President of the Jewish Consistory, he opened a house of prayer in Kassel, the rite of which was similar to that in Seesen, and promoted the establishment of a seminar for the training of Jewish teachers.

In addition, he was elected with 135 of 165 votes cast as a member of the merchants and manufacturers of the Oker department in the Imperial Estates , the parliament of the Kingdom of Westphalia. He was also made a knight of the Order of the Westphalian Crown in 1812 .

The French writer Stendhal (1783–1842), who worked as an administrative clerk in Braunschweig from 1806 to 1808, judged Jacobson in a diary entry on January 14, 1808: "Of all my Braunschweig acquaintances, only one really has spirit, namely Jacobson" .

After the overthrow of Jérôme Bonaparte, Jacobson lived in Berlin from 1813 and became a member of the Society of Friends . Here he was strongly hostile to the Orthodoxy. In the spring of 1815, he set up a private synagogue based on the Reformed rite in his living quarters in Palais Itzig at Burgstrasse 25 . Towards the end of the year the synagogue was moved to the house of the sugar producer and banker Jacob Herz Beer , father of the composer Giacomo Meyerbeer . Preachers were among others Eduard Kley , Leopold Zunz and Isaak Levin Auerbach. But the Prussian government , remembering Jacobson's French sympathies and to which Orthodox Jews also complained, banned the services in 1823.

After the death of his first wife, Israel Jacobson married Jeanette Leffmann (1801–1874) from a Hanoverian banking family. He died in Berlin in 1828 and was buried in the Jewish cemetery on Schönhauser Allee . The grave is preserved.

Memorial plaque on the house at Burgstrasse 25, in Berlin-Mitte

The Union of Progressive Jews in Germany has been awarding the Israel Jacobson Prize since 2001 . The undoped prize is usually awarded every two years to honor outstanding personalities who, in the spirit of Israel Jacobson, have made a contribution to a living Judaism of the modern age.

In July 2010, a plaque donated by the city of Seesen in honor of Jacobson was unveiled in Berlin on the site of Jacobson's former home.

On April 6, 2016, the Israel Jacobson Network for Jewish Culture and History was founded in Braunschweig . The aim of its members from science, politics, business and culture is to raise awareness of the history of Jewish culture in south-eastern Lower Saxony .