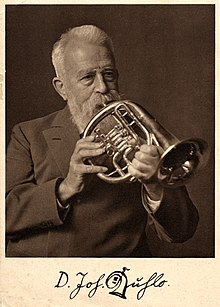 Karl Friedrich Johannes Kuhlo (* October 8, 1856 in Gohfeld , today Löhne ; † May 16, 1941 in Gadderbaum , today Bielefeld ) is considered, together with his father Eduard Kuhlo, to be the founder of the Protestant trombone choir movement in Germany.

Johannes Kuhlo was born as the son of the evangelical pastor Eduard Kuhlo (1822-1891), who belonged to the neo-Pietist revival movement and founded so-called youth and virgin associations to keep young people away from alcohol and immorality and instead to teach them religiously. Johannes Kuhlo was later able to build on the work of his strictly biblical father.

Since 1865 Johannes Kuhlo has autodidactically acquired the alto trombone game. In 1870 he switched to a flugelhorn . In 1871 he was one of the initiators of the foundation of the high school trombone choir at the Evangelical-Stiftischen-Gymnasium Gütersloh .

After he had passed his Abitur at the Evangelisch Stiftisches Gymnasium in Gütersloh in 1875 , he studied Protestant theology in Leipzig from 1876 . In 1877 he moved to Erlangen , and finally to Halle (Saale) and Münster . During his studies he became a member of the Wingolfs connections in Erlangen and Leipzig .

Then he was "Oberhelfer" in the Rauhen Haus in Hamburg . At the age of 26 he was ordained in Hüllhorst near Lübbecke in 1882 . Three years later he married the pastor's daughter Anna Siebold from Schildesche (now in Bielefeld). In 1892, at the request of Friedrich von Bodelschwingh , also Wingolfit from Halle, Kuhlo took over the pastoral office in the von Bodelschwingh institutions in Bethel and became head of the Nazareth deaconry. He let the deacons trained there play wind instruments and thus achieved a widespread dissemination of trombone music in the congregations.

In 1927 the theological faculty in Erlangen awarded him an honorary doctorate .

Commitment to the music

Kuhlo was musically engaged throughout his life. Together with the Bielefeld instrument maker Ernst David , he designed the Kuhlohorn named after him . At the age of 25 he was already so well-known and successful after many wind meetings and training courses that he was nicknamed "General of the Trumpets". He described himself as a “co-worker at Psalm 150” (“Praise the Lord with trumpets!” - Ps 150.3  LUT ).

In 1899/1900 he mobilized thousands of singers and wind players to pay homage to the emperor in Westphalia, who played under his direction. The "Kuhlo Horn Sextet" existed from 1920 to 1931. From 1926 he officiated as trumpet warden of the then "Reich Association of Evangelical Young Men of Germany". In 1933 he acted briefly as "Reichsposaunenführer". After the trombone choirs were hived off from the young men 's federations and the restructuring of the "Association of Evangelical Trombone Choirs in Germany" within the Reich Chamber of Music, he became its honorary president in 1934.

The 1st Reich Trumpet Day, organized in Bielefeld and Bethel in 1936 on the occasion of Kuhlo's 80th birthday, suffered severe harassment from the local Nazi rulers.

On Kuhlo "Piano spelling" goes for trumpets and horns back in the notes sounding are written so in the really sounding pitch (called "C-Class"). He had introduced this so that the congregation, organ, choir and trombone choir can play together without any problems. The simultaneous demarcation from the secular area, especially military music (see  transposing musical instrument ), was definitely intended. Kuhlo wanted to prevent the members of the trombone choirs from hiring transposing brass bands, which he regarded as reprehensible because of their beer consumption and repertoire.

Kuhlo was the editor of several music books for the trombone choirs and the book "Trombone Questions", which basically dealt with the work of the trombone choirs. Kuhlo's sound ideal was based on the view that the trombone choirs should imitate a vocal choir as closely as possible. That is why he preferred horns of all kinds and particularly despised trumpets. After Kuhlo's death, this view was thoroughly revised, in some cases even reversed.

Since his time as vicariate with Pastor Julius Möller in Alswede (1882), Kuhlo was considered an electoral supporter and supporter of the imperial court preacher Adolf Stoecker (1835-1909), who later wanted to win over the workers for conservative circles through open hatred of Jews. So Kuhlo expressed himself anti-Semitic and tried to justify this attitude by quoting the Bible. In 1933/34 he was a staunch supporter of the Reich Church sworn on Hitler . In May 1933 Kuhlo became a member of the NSDAP and remained so until his death in 1941. His NSDAP membership card (in the Federal Archives in Berlin) is dated May 1, 1933 . He openly stood up for Adolf Hitler , called for his election as early as 1932 and visited him in July 1933 on the Obersalzberg . The Bielefeld church historian Matthias Benad judges that Kuhlo had already made Hitler acceptable in revival circles on the occasion of the presidential election in 1932. Kuhlo included a trombone version of the Horst Wessel song in his music collection . In front of the 'Führer' he blew chorals on the Obersalzberg. Kuhlo said that Hitler was a devout Christian and read the Moravian slogans , Benad reports.

The Austrian author Heimito von Doderer portrays Kuhlo in his novel The Waterfalls of Slunj as a “Lutheran pastor who was nicknamed 'Trumpet General' at home, because Pastor (or, as they said in his home country, 'Paster') Kruhlow was the head an association of trombone players branching out all over Germany. ”(p. 313)“ Kruhlow ”and his wife are part of a“ pleasure travel company of nine active trombones, that is nine gentlemen, some with their ladies ”(ibid.), who undertakes a boat trip through the Mediterranean.

Jubilate and other choral books

The personal estate of Johannes Kuhlo has been in the Bielefeld Regional Church Archive since 1985 (holdings 3.16) the archive holdings from activities in Bethel are kept in the main Bethel archive.