from Wikipedia, the free encyclopedia
This is the spotted version , flagged on May 8, 2020 . There are 4 pending changes that have yet to be viewed.

The Koenigsegg CC (CC for Competition Coupe) is a super sports car that the Swedish vehicle manufacturer Koenigsegg produced in different versions.

In 2010 the CC was replaced by its successor, the Agera .

The Koenigsegg CC is the prototype of the CC8S. Work on the first vehicle began in 1994. Christian von Koenigsegg's goal was to be faster than the McLaren F1 . This, as well as the Ferrari F40 , served as inspiration for the first prototype.

In order not to disappear from the scene as a Swedish, automotive start-up company , Koenigsegg's team had to come up with a few special features. For example, the vehicle was designed so that the roof can be removed in one piece and stowed in the front luggage compartment. The Dihedral Synchro-Helix Actuation Doors known for Koenigsegg , a special form of scissor doors , should also serve as a unique selling point. 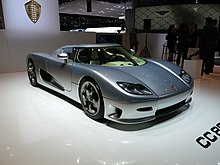 The CC8S is the first series- produced vehicle from Koenigsegg. It was presented to the public at the Paris Motor Show in 2000 . The first orders were also taken there.

Six vehicles were built in 2002 and 2003. Two of them are right-hand drive . The engine for this model was assembled by Koenigsegg in the production facilities in Ängelholm , but was based on a Ford V8 engine.

In a crash test in the Swedish Autoliv Crash Test Center, the Koenigsegg CC8S came off as one of the safest of all vehicles ever tested there, despite its lightweight construction.

The CC8S won a number of awards, including the Red Dot Design Award for excellent design. It also received an entry in the Guinness Book of Records for the most powerful series -produced engine for a motor vehicle.

The successor to the CC8S is the CCR. Compared to the CC8S, the CCR has a refreshed design, a larger front spoiler, larger wheels and brakes, a rear spoiler as well as an improved suspension and chassis.

The Koenigsegg CCR reached a top speed of 387.87 km / h on the circular Pista di Nardò in Italy on February 28, 2005 and replaced the McLaren F1 as the fastest street-legal production vehicle in the Guinness Book of Records . On May 20, 2005, the Bugatti Veyron reached over 400 km / h in Ehra-Lessien and displaced it in later editions.

The CCR is the first Koenigsegg with the typical ghost symbol. It is a tribute to the Swedish combat aircraft squadron No. 1, which was previously stationed in the Koenigsegg production halls.

The CCX is the third generation of the CC. It was presented to the public at the 2006 Geneva Motor Show .

The goal when developing the CCX was to build a vehicle for the international market. Especially the environment and safety regulations of the USA caused the fundamental changes. The chassis was enlarged, the roofline raised and the bumpers and lights changed. The previously used Ford engine block has been replaced by a completely new development from Koenigsegg in order to meet the Californian emissions standards.

In addition to the optical changes, so much was technically changed that basically no part of the predecessor CCR was adopted.

CCX stands for Competition Coupe X. The X stands for the Roman number 10. It marks the ten-year anniversary of the CC prototype, which was completed in 1996 and completed the first test drives.

A total of 49 CCX were built between 2006 and 2010. These included 9 CCXR, 6 CCX / CCXR Edition, 2 CCXR Special Edition and 2 CCXR Trevita. One CCX was used for crash tests, and another was used as an in-house test vehicle.

The CCGT is a racing version based on the CCX. It was built to compete in the FIA GT Championship . It was presented to the public in 2007 at the Geneva Motor Show .

Two months after the first test drives ended, the ACO and the FIA changed the regulations for the GT1 class. In addition to the ban on the use of carbon monocoque , there was also the requirement to build at least 350 street versions of the participating racing vehicles per year. This was not possible for Koenigsegg in 2007. Up until that point in time, the car manufacturer had just managed to build almost 40 vehicles in eleven years. Thus the CCGT could never take part in a GT1 championship and the project was ended after only one copy was built.

The CCXR is the "environmentally friendly" version of the CCX. Driven by the same motor, the CCXR also has the option of being operated with E85 or E100. In the course of time some CCX were converted to CCXR specifications.

In March 2009, Forbes named the CCXR one of the ten most beautiful cars in history.

These two editions are even more focused on the racetrack, have an even firmer suspension and a lowered chassis. The greatest visible specialty of these editions is the body made of carbon fiber and only painted with clear lacquer. Both versions also got new 11-spoke aluminum rims, a new, double rear spoiler and other visual and aerodynamic changes.

Trevita is Swedish and stands for The Three Whites . The special thing about this model is the white-silvery shimmering carbon fiber body. Koenigsegg has developed a process especially for this purpose, with which the naturally black carbon fiber is coated with a light-colored, unspecified material. This creates the impression that countless microscopic diamonds have been worked into the carbon fibers, especially when there is strong incidence of light.

Originally - as the name suggests - three copies were planned and announced. Due to the very difficult processing of the special carbon fiber, only two of the three Trevita were completed.

The CCXR Trevita is one of the most expensive vehicles in the world with a sales price of 4.8 million US dollars.

The end of the CC series was marked with two CCXR Special Edition models. In addition to a visible carbon body, both also have a double rear spoiler, new aerodynamic elements and a touch screen - infotainment system . Both variants are also equipped with the newly developed gearbox with steering wheel shift paddles .

The Koenigsegg vehicles have a CFRP chassis , a steel frame in the front area and an aluminum frame in the rear. The entire body is made of carbon fiber reinforced plastic (CFRP).

Rear view of the CCX

The bodies of the CC8S and the CCR differ only in details. The differences are mainly in the area of ​​the rear lights and the headlights. The vehicle has a so-called Targa roof that can be removed and accommodated in the 120 liter luggage compartment. The doors are a mixture of normal vehicle doors and scissor doors . When they are opened, they first move away from the body and then swivel upwards, so when they are open they stand vertically behind the front wheels.

Koenigsegg offers a ten-year guarantee against rust perforations, although thanks to the materials used there is hardly a part of this vehicle that could rust.

The CFRP bucket seats have leather and Alcantara covers and are upholstered with Tempur , a material developed by NASA , which adapts to the shape of the body.

The engine of the Koenigsegg CC8S is based on a 4.7 liter V8 racing engine from Ford and its performance is increased by supercharging. The engine of the CCR and CCX was self-developed, but has the same data as the Ford engine, with the exception that it is charged by two compressors. By using aluminum alloys from aviation as well as the materials titanium and CFRP, the engine weight could be reduced to 210 kg (CCR: 215 kg).

The engine of the CCXR is designed to use ethanol as fuel and thus achieves a higher output than the almost identical CCX.

The Koenigsegg was equipped as standard with a manually operated six-speed gearbox from Cima. The differential sits in the same housing, which means it is a transaxle gear according to the definition in English-speaking countries. A sequential switching mechanism is available as an extra. However, the sequential gearbox ( F1 Gearbox ) is now specified as standard on the Koenigsegg website .

The Koenigsegg CCR was tested by sport auto in October 2005 :

Despite its low weight, the Koenigsegg is atypical of a sports car - as any special equipment increases the vehicle weight - very well equipped. Standard features include:

Despite these extras, the car moves on the weight level of a Pagani Zonda or Saleen S7 . The Ferrari Enzo or the Porsche Carrera GT are around 100 kg heavier.