The title of this article is ambiguous. Further meanings are listed under Krampus (disambiguation) . 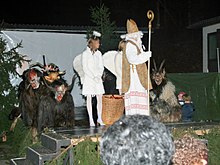 St. Nicholas, accompanied by angels and a pack of Kramperl, praises and rebukes the children and distributes gifts from the gift basket. Salzburg customs ( Flachgau )

The Krampus , also known as Kramperl or Bartl, in tradition a frightening figure accompanied by Saint Nicholas , is a figure of the Advent tradition in the Eastern Alps , in southern Bavaria and the Upper Palatinate , in Austria , in the Principality of Liechtenstein , in Hungary , Slovenia , Slovakia , in the Czech Republic , South Tyrol , Welschtirol (Trentino), parts of the extra-alpine northern Italy and parts of Croatia . While Santa Claus gives presents to the good children, the naughty ones are punished by the Krampus.

The figure of the Krampus originally comes - like many other demonic figures in the Alpine region - from pre-Christian times.

The group consisting of Nikolaus, Krampus and other companions is referred to in Bavarian dialects as bass or pass .

The name is derived from the Middle High German Krampen 'Kralle' or Bavarian Krampn 'something lifeless, dried up, faded or withered'. In many regions the figure of the Krampus has mixed with the Perchten tradition (cf. Schiachperchten).

In the Bavarian foothills of the Alps and in the Austrian Salzkammergut , Styria and Salzburg , the Krampus is more commonly known as Kramperl . In Styria and Carinthia, in addition to Kramperl , the term Bartl is also used, a short form of Bartholomäus. Due to the centuries-old Slovenian-German bilingualism of Carinthia and Styria, it can be assumed that the Slovenian name parkelj is also derived from Bartl , especially since the alternation t → k or d → g ( Kittel → kikelj , Kandl → kangla ) is also used by others Loans into Slovenian occurs. The name Miglo also occurs in the Salzkammergut . In the Tyrolean area one speaks more often of Tuifl , Tuifltåg or Tuifltratzen , derived from the term devil . The term Ganggerl is also used. 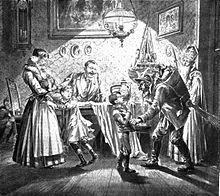 Visit from Nikolaus and Krampus. Illustration from 1896

The Krampus custom was originally widespread throughout the Habsburg Empire and neighboring areas and was then banned during the Inquisition , as no one was allowed to dress up as a devilish figure under the penalty of death. However, this winter custom was continued in some hard-to-reach places.

Beginnings and developments of the custom

There are no sources before the end of the 16th century. Starting from the convent schools ( children bishop Festival ) became apparent only since the mid-17th century, the retreat practice : Accompanied by bogies, devils and animal masks ( Habergeiß checks) and Nicholas rewarded good children while being naughty punished by the Krampus. In the Counter-Reformation period , room games were created that still exist in Bad Mitterndorf , Tauplitz and Pichl-Kainisch ( Salzkammergut ), in Salzburgerland and in Tyrol .

Since then, the Krampus Passes have formed parallel to the Perchtenlauf. Only the able-bodied, unmarried men of the village are allowed to participate, and with him the event has been public again since the middle of the 19th century.

Outside the Counter-Reformation areas, the Krampus remained ousted by Knecht Ruprecht , who was influenced by North German Protestants . - In the Alemannic-Protestant area, the two forms mix, which probably have a common origin in an Italian figure of the 16th century: There was the idea that the devil devoured the souls of sinners. Evil is particularly strong in the harsh winter time and therefore shows itself in this form, which was depicted vividly.

In many villages and towns in the Eastern Alps , in southern Bavaria and the Upper Palatinate , in Austria , parts of the Principality of Liechtenstein , in Hungary , Slovenia , Slovakia , in the Czech Republic , in Italy (limited to South Tyrol , Welschtirol (Trentino) and especially in Vinschgau as well as in Pustertal ) and parts of Croatia there are still Krampus parades, where people dressed up as Krampus march through the streets to the loud noise of their bells to scare passers-by. They also make use of their long rods. The Tuifltratzen ( Tyrol ) or Kramperltratzn ( Bavarian tratzen , reizen , frozzeln ', in parts of Austria: Kramperlstauben obdt. Dust ,' chase away ') is in some places a test of courage for the children of the area who try to irritate the Krampus without being caught or to be beaten.

One of the largest parades with over a thousand Krampus (2008) is the Krampus run in St. Johann im Pongau , which takes place every December 6th, and Austria's largest Krampus run in Klagenfurt . The latter stretches over a distance of 1.5 kilometers. 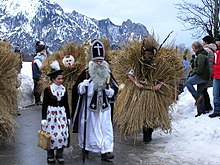 It should be noted that there are regional differences in customs, some of which vary greatly (for example shows in Carinthia with fireworks, torches and fire-breathers - compared to the use of rods for trotting by onlookers in Salzburg). One of the most impressive and spectacular Krampus parades takes place in East Tyrol. In this region it is not only customary to move, but also to throw a traditional Krampus throw, similar to the throwing technique used in Ranggeln, between Krampus and “bully”. However, this is based on the complete voluntariness of the brave, as separate zones are set up for this type of tradition. The spectator can safely watch the spectacle behind the barriers.

An additional peculiarity of the customs is the table pulling (East Tyrolean dialects tischziagn or tischzoichn ), which has been practiced for decades . At these events, which are organized separately from the shows, some volunteer men sit down behind a large, solid wooden table and try to hold the table for so long to hold on to the onrushing Krampusses as possible on your own. The goal of the Krampus is either to tip the table over or to pull the table far enough away from the starting point. This type of competition is decided separately for each round, as the men usually change after a round and the Krampus are divided into different groups.

In the East Tyrolean Defereggental valley, Nikolaus and Krampus are accompanied on December 5th by a number of other characters who have visited the farms during the course of the year: Bajazzo, Lotter and Litterin (beggar), a bridal couple with a minstrel, doctor, policeman, mayor and fireman, and death which indicates the transience of life.

In the Bozner Unterland (South Tyrol) there has been a female Krampus pedant since the end of the 20th century, the fur whores who also take part in Krampus runs.

In Berchtesgaden , the southern part of the district of the same there are two Krampusse: the dressed all in fur "Kramperl" and more agile, equipped with (socks) Pants without fur and smaller bells Gankerl (also: Ganggerl ), in turn, in particular the the Glöcklern the Perchten related Bassen very straw eingebundener Butt Mandl accompany protective.

In the Gastein Valley are annually on 5 and 6 December 80 to over 100 Adjust the go. The various passes consisting of Krampus, "Engerl", "Buttnmandl" (not to be equated with the Buttnmandl in the historic Berchtesgadener Land) and Nikolaus can be recognized by the different colors of the robes. Traditionally, they go from house to house, on December 5th in the centers of Bad Gastein, Bad Hofgastein and Dorfgastein and on December 6th in rural areas. The passes go from house to house and ask the landlord to let in. The Nikolaus (and possibly the angel) and the basket bearer enter the room, the "good" are rewarded, then the Krampus or Kramperl are admitted and the "bad" are punished. When two passes meet (which can often happen because each of the passes has a path that is independent of all others), an exhausting and spectacular greeting ritual is performed. The Santa Clauses cross the bishop's staff, the angels and the basket-bearers also greet each other, then it comes to the devil beating (the two devils greet each other and show the other by bumping into each other their strength), then the other Krampus are allowed to bump. Once this has happened, the passports show each other to recognize and wish for “A guads Weitageh ', faithful in guadn oidn custom” (A good move on, faithful to the good old custom). Numerous locals and guests from near and far come to the Gastein Valley on these two days every year.

In the Alemannic Alpine region (Allgäu, Switzerland) a similar custom is called Klausentreiben with different characters .

The Krampus is also similar in function to Knecht Ruprecht , who is known in north and west Germany , but there are differences between the two characters: While Knecht Ruprecht appears individually, the Krampus usually appear in larger groups. In Swabia , the fur nickel accompanies the bringer of gifts. In Switzerland, St. Nicholas is accompanied by “Schmutzli”. Like the Krampus, this is intended to punish naughty children, but carries a sack and instead of cow bells or bar bells, a belt strap. The Krampus resembles the devil in its appearance as well as mythical and animal figures, such as those perched as Schirch in alpine customs. In contrast to these that run in the Rauhnächten , the Krampusse belong exclusively to the Advent tradition.

Similar figures appear in the Scandinavian region between Christmas and New Year's Eve. This custom is known as "julebukklaufen" and was common in Norway at least until the middle of the 20th century.

However, the equipment differs from place to place. Usually the Krampus masks cover the entire head. Wooden masks are new in fashion, however, in which the chin and lower lip are kept free so that the runner can move their mouth and stick out their tongue. The visible parts of the face are painted with an appropriate color so that the masks look more "real".

Krampus attacks and brawls regularly cause horror and public discussions. Every year there are disputes at Krampus runs. Occasionally spectators take revenge for rod blows and attack Krampuses. In 2013, after several Krampus runs in East Tyrol, a total of eight injured people (mostly with broken bones) were admitted to the Lienz district hospital and more than 60 other patients treated on an outpatient basis.

In the mirror of art (postcards)

Especially at the beginning of the 20th century, artists also adopted the Kramperl as a motif:

Obviously, the Krampus is fairly well known even in the United States , because with episode 8 of season 10, the animated series American Dad dedicates an entire episode to him. And he also has a guest appearance in episode 7 of the 13th season of the same cartoon series.

Also in season 3, episode 8 of the series Grimm , the Krampus appears as a malicious being.

The Sky series production The Pass is also dedicated to the Krampus myth.