Tank was born in Bromberg as the son of electricity construction supervisor Willy Tank. From 1905 to 1914 he attended the grammar school in Nakel , which he left after completing a notabitur as he served as a volunteer in the infantry in the First World War on the Eastern Front from 1914 to 1919 . During this time he was trained as an officer and from 1918 was deployed as a lieutenant and company commander in a free corps in Weimar .

After completing his military service, he took a position as an intern at Orenstein & Koppel in Berlin from May to November 1919 . He then studied electrical engineering and mechanical engineering at the Technical University of Berlin from 1919 to 1924 . In Berlin he was also a co-founder of the Academic Aviation Group Berlin and participated in the construction of the Teufelchen glider as part of the preliminary diploma examination . From April 1924 to December 1929 he was head of the aerodynamics department and flight testing at Rohrbach Metallflugzeugbau GmbH.

In 1925 he acquired the A-2 flight license in Berlin-Staaken . From January 1930 to October 1931 he was project manager of the flight testing office at the Bavarian Aircraft Works in Augsburg . 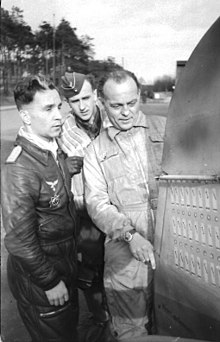 In 1931 he started working for Focke-Wulf Flugzeugbau GmbH in Bremen on November 1st as technical director of the design office and flight testing. At first he worked with Henrich Focke and from 1933 as sole technical director and chief designer. Since Tanks' area of ​​responsibility extended to flight mechanics , flight testing and design, he developed a variety of aircraft types for the German Air Force and civil aviation as a designer and single flyer . Shortly after the takeover of the Nazi regime that began upgrading the Wehrmacht . Armaments factories in the Reich received numerous orders; they intensified research and development of new products and weapons. On April 10, 1933, Tank was appointed to the management board of Focke-Wulf AG, replacing Henrich Focke in this position. After the conversion of the company into a GmbH in 1936, he moved to the management in 1937, of which he was a member until its dissolution on July 15, 1946.

In 1933/34 Tank constructed the Fw 44 Stieglitz (a training aircraft of the German Air Force ), the Fw 56 Stößer (a training fighter aircraft ) and in 1935 the twin-engine Fw 58 Weihe (training aircraft). In 1936 he was appointed flight captain and designed the multi-purpose combat aircraft Fw 57 and the four-engine Fw 200 Condor , which was the first long-haul passenger aircraft to be used.

During the Second World War , Tank was one of the most important designers of fighter planes for the German Air Force. In 1939 he began designing the single-seat fighter Fw 190 Würger , which from 1941 became the second standard fighter in the Air Force alongside the Messerschmitt Bf 109 . The further development of the Fw Ta 152 was only used sporadically in 1945. Both were among the best fighters of their time. At the end of the war he developed the groundbreaking, jet-powered fighter aircraft Fw Ta 183 Huckebein . The prototypes and construction documents captured by the Allies had a strong influence on the development of the Soviet MiG-15 and the US F-86 .

The Technical University of Braunschweig appointed him professor; He also held a teaching position for special aircraft (long-haul and high-speed airliners). In 1944 and 1945 he was head of the Main Development Commission (ESK) and the Night Hunting Development Commission . On April 8, 1945, he was captured by the English secret service at the headquarters of the Focke-Wulf-Werke in Bad Eilsen and interned at Schaumburg Castle.

Tank had been a member of the NSDAP since 1932 and was later appointed Wehrwirtschaftsführer . After the war he was banned from practicing his profession , which had been laid down by a control council law. In 1945/46 he founded his own engineering office. There he developed residential and workshop buildings, but remained devoted to aircraft construction.

Working in Argentina and India 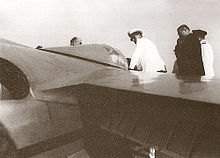 Under the name of Prof. Dr. Pedro Matthies , Tank emigrated to Argentina via Denmark and Sweden along with a number of other aviation experts in 1947. Juan Perón , then President of Argentina, let the designers work on several armaments projects. Based on the Focke-Wulf Ta 183 , the group around Tank in Córdoba developed the jet fighter FMA I.Ae. P. 33 Pulqui II and was involved in a solid rocket rocket project in Falda del Cármen . After Perón was overthrown in a military coup in 1955 , the former Focke-Wulf designers went to various countries; the majority of them to the US .

In 2008 the German Museum , which has records from Tank, sponsored a research project by an Indian researcher. The project title was Kurt Tank, German Aeronautical Engineering and India's Quest for a Jet Fighter .

Tank spent his last years in Berlin and Munich.