View from the terrace over the garden belonging to the theater and the Forggensee to Neuschwanstein Castle, November 2003 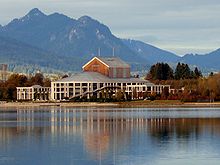 View from the other shore of the Forggensee near Schwangau

Ludwigs Festspielhaus is a private music theater on the shores of the Forggen lake in Füssen . Neuschwanstein Castle on the opposite bank, the setting for the Ludwig musicals in this theater, can be seen from the terrace of the theater .

History of the house

The house was designed by Josephine Barbarino as the “Musical Theater Neuschwanstein” and built between 1998 and 2000. On April 7, 2000, the theater opened with the world-famous premiere of the musical Ludwig II - Longing for Paradise by Franz Hummel (music), Stephan Barbarino (text and direction) and Heinz Hauser (stage design).

Barbarino had been pursuing the idea for a musical about Ludwig II , King of Bavaria, in his own theater at the original location since the mid-1990s, from 1994/95 together with the Mannheim general manager Ulrich Schwab under the name Dreamking and from 1996 to the end the premiere year 2000 together with cultural manager Felix Maria Roehl . With his function as board member of Ludwig Musical AG & Co. KG, the project on Ludwig II - Longing for Paradise was realized in the specially built "Musical Theater Neuschwanstein". Barbarino continued to be the artistic director and overall artistic director until the musical about King Ludwig had to be canceled on December 31, 2003 for obscure economic reasons, even though 1.5 million people had attended the 1506 performances by then, which was an average occupancy of around 75 percent corresponds.

Ludwig² - The myth is alive

On March 11, 2005, a second, completely newly created musical about King Ludwig under the title Ludwig² - The Myth Lives was premiered in the theater, which was renamed “Festspielhaus Neuschwanstein” in 2004 . The music was composed by Konstantin Wecker , Christopher Franke and Nic Raine , the lyrics are by Rolf Rettberg , and Gerd Fischer directed the production . In the first year of the game, around 200,000 visitors attended the performances.

On March 1, 2007, the shareholders decided to stop gaming operations in view of the chronically low occupancy and the lack of economic prospects.

From the summer of 2007 the theater was again open to visitors under the names "Musiktheater Füssen" and "Festspielhaus Füssen". The house was rented to third party organizers as a play theater . For example, Andreas Gabalier's “Volks Rock'n Roll Show” was recorded there in the summer of 2014. Since 2012 there has been an annual “King's Gala” in the Festspielhaus on Ludwig II's birthday.

In summer 2016, the operating company of the house filed for bankruptcy.

In November 2016 the insolvent house was bought by Manfred Rietzler. On April 1, 2017, the theater was reopened as "Ludwigs Festspielhaus".

In addition to a daily 3D stage show about Ludwig II, the musical Ludwig² returned for 23 performances in August 2017.

The program also includes a variety festival, the musical A Midsummer Night's Dream and some cabaret events.

The extensive gastronomy of the house (beer garden / beer tavern, café and bar) was taken over by the Lerch company (until April 2020) from Biberach. The bar has been in-house since April 2020.

In 2018, 60 shows of the musical Ludwig² were shown in three performance blocks (May / June, August / September and December). In addition to the musical, various artists (including Monika Gruber , Reinhard Fendrich ) made guest appearances in the Festspielhaus in 2018 . The Königswinkel Open Airs (2018 with Fanta 4 and Sting, among others ) also took place in the house's baroque garden.

Furthermore, two other musicals, Frank Nimsgern's Der Ring and Die Päpstin, were shown for the first time at the Festspielhaus in 2018 .

Financier Manfred Rietzler sought to build a hotel on the theater grounds. An upcoming referendum, however, led to the abandonment of this idea.

In addition, other external events such as The Gypsy Baron , Beat it - The Musical or Jesus Christ Superstar as well as the concert event Ludwig meets Michael Jackson (June) were staged in 2019 .

In 2020 Sarah Connor , Sido , Xavier Naidoo and Roland Kaiser were to be guests in the Baroque Garden.

The musical Ludwig² was also scheduled for 2020 with 55 performances in Füssen.

The world premiere of Ralph Siegel's new musical Zeppelin was scheduled for November 2020 . This was postponed to an unknown later date in May 2020.

The planned current display is suspended for the time being due to the COVID-19 pandemic .

Since September 15, 2018, the Festspielhaus has been offering lessons for children and young people between the ages of 7 and 18 under the name Ludwigs Musical Academy . The school management is Stefanie Gröning. The lecturers include Benjamin Sahler (acting), Kristin Backes (dancing & singing), Nils-Holger Bock (singing), Marlou Düster (acting) and Vera Horn (acting).

In December 2018, the first results of the lessons were shown in a work show. In the summer of 2019 the musical Cats was performed with the students of the Ludwigs Musical Academy .

The building comprises a main part in which the auditorium , stage , rehearsal stage, cloakrooms , workshops and offices are housed, as well as two side wings that are symmetrically connected to the main part and foyers , gastronomy (café, beer hall with beer garden, restaurant and Germany's longest bar with 22 meters) halls and a theater shop. In its greatest dimensions, including the side wings, the building is 160 meters long, 80 meters deep and 32 meters high.

The festival hall was built on a specially raised, almost 50,000 m² large lake plot on the Forggensee. The shoreline was designed parallel to the building and a pseudo-baroque garden was created between the building and the shore , the symmetrical design of which reinforces the effect caused by the exact axial alignment of the building with Neuschwanstein Castle, which is almost 4000 meters away. In the summer months, the Festspielhaus can also be reached with the Forggensee shipping, which has set up a new dock.

The auditorium of the by Josephine Barbarino designed Festspielhaus is to that of Gottfried Semper designed and first used by Richard Wagner Festspielhaus of Bayreuth Festival ajar used form of "democratic auditorium," that is, there are no lodges , but amphitheater seating on by each Provide space with good visibility on the stage and thus the possibility of full concentration on the stage.