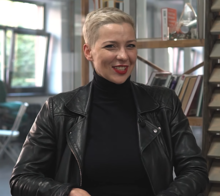 Through her relationships with Svyatlana Zichanouskaja , Weranika Zapkala , the wife of Valeryj Zepkala , and the friendship with Wiktar Babaryka as well as the political development in her home country , she became a human rights activist and non-party politician. In 2020 she became internationally known for her role in the Belarusian opposition.

At the beginning of September 2020 , Kalesnikawa " disappeared " in Minsk in a previously unexplained manner; Her family announced two days later that she was in state custody . In February, the prosecutor expanded the charges against her: she is said to have been involved in a conspiracy to seize power in an anti-constitutional manner and to have founded and led an extremist association. For this she was sentenced to eleven years in prison.

Maryja Kalesnikawa completed a soloist degree in flute at the Belarusian State Music Academy in Minsk . She then studied ancient and contemporary music at the Stuttgart University of Music . She then spent several years abroad and took part in numerous German and international festivals with various ensembles. She has been teaching classical music since 2016 and has been the project manager of the Artemp Festival since 2017. She speaks fluent German.

Participation in the presidential election campaign in 2020 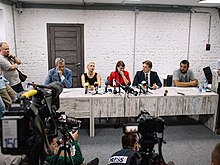 After the arrest of the opposition politician Babaryka, she took his place in the 2020 presidential election campaign . Together with Svyatlana Zichanouskaja and Weranika Zapkala , the wife of Valeryj Zapkala , she formed a trio of women against the ruling Aljaksandr Lukashenka before the presidential election , which quickly achieved surprising results for the government. “The appearance of the three women is something new in Belarus. Their language, their gestures. One always shows a victory sign , the second stretches her right fist, the third forms her hands into a heart. "

After the election, which was largely viewed as a sham election internationally , Maryja Kalesnikawa was the only one of the trio to remain in the country, while massive unrest and numerous protests against the government broke out. Numerous demonstrators were injured and arrested as a result of repressive measures by the police and the authorities. Kalesnikawa is a member of the Opposition Coordinating Council for the Transfer of Power, founded by Svyatlana Zichanouskaya on August 19, 2020 in Belarus .

At the beginning of September 2020, Maryja Kalesnikawa announced the founding of a new party called Rasam (German: Together, Russian Вместе Wmeste ), which works independently of the Coordinating Council.

On September 7, 2020, the media initially reported that Kalesnikawa had been arrested or abducted. She was arrested in downtown Minsk by as yet unidentified people. The police are checking whether she has been kidnapped. It was suspected that they had been made to disappear . Even two of her employees, Anton Rodnenkow and Ivan Kravtsov , each message was missing. On the same day, the German Foreign Minister Heiko Maas called on the Belarusian leadership to investigate the disappearance of Kalesnikawa immediately and publicly considered how the EU would react collectively. On September 8, the media reported that Kalesnikawa was arrested by the Belarusian border guards on the border with Ukraine for allegedly “resisting their deportation” and “tearing up her passport”. Rodnenkow and Krawzow, on the other hand, were forced to leave the country. On the other hand, the Belarusian side reported that Kalesnikawa had also "left" after being temporarily detained in Ukraine . The Ukrainian border guards denied this. The coordinating council of the opposition movement announced that they did not know where Kalesnikawa was at the moment and could only confirm that she had not wanted to leave the country voluntarily.

In an interview, the Deputy Minister of the Interior of Ukraine said that Kalesnikawas had not left the country, but that a deportation by the KGB had failed because of their brave behavior; Ivan Kravtsov later confirmed this. Her family said that, according to information from the investigative authority, Maryja Kalesnikawa is in a detention center in the capital Minsk and that she has been accused of “calling for power to be taken over and forcibly changing the constitution”.

Solidarity rallies took place in Minsk on Wednesday, September 9, 2020, during which people also demanded the release of Kalesnikawa and the other political prisoners. There were several arrests again.

On September 10, 2020, Kalesnikawa announced that she had been threatened with dismembering her body and a 25-year prison sentence. She therefore brought criminal charges against the authorities, in particular the Belarusian KGB and OMON, for threats of death. According to her lawyer, Kalesnikawa was bruised and bruised.

Shortly afterwards, Kalesnikawa was transferred to a prison in the city of Shodsina, northeast of Minsk.

On September 13, 2020, the opposition again called for mass protests in the country . A “March of Heroes” was held in Minsk, which also remembered Kalesnikawa.

On September 16, 2020, Kalesnikawa was charged with "endangering state security." According to the investigating authority, the accused had used the Internet and the mass media to call for acts that were directed against national security and wanted to harm Belarus.

Kalesnikawa's attorney, Lyudmila Kasak, called the allegations against her client that she had attempted an illegal seizure of power as absurd.

The public was barred from taking part in the trial of Kalesnikawa and co-defendant Maksim Snak in the Minsk District Court, and those involved were sworn to secrecy. On September 6, 2021, Kalesnikawa was sentenced to eleven years in prison, Snak to ten years.

Concerning the arrest of Kalesnikawa, the Green Prime Minister of Baden-Württemberg, Winfried Kretschmann , expressed himself in a letter to the Ambassador of Belarus, Denis Sidorenko. In it, Kretschmann called for an end to the action against those who think differently. About Kalesnikawa, who studied in Stuttgart, he said: "For weeks she has been a pioneer in the demonstrations of the opposition, but always pleaded for the complete non-violence of the protests." The leadership in Belarus must expect EU sanctions if they do theirs Do not change course.

The human rights organization Amnesty International said that Kalesnikawa had not committed an internationally recognized crime and that she was being prosecuted for exercising her rights to freedom of expression, association and peaceful assembly. Amnesty International therefore classified her as a political prisoner and requested her immediate release.