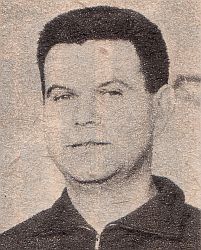 Miloslav Kříž (born May 29, 1924 - † May 20, 2013 in Rožmitál pod Třemšínem ; also known as Miloslav Kriz) was a doctor of law , basketball player from Czechoslovakia , sports official and FIBA ​​commissioner as well as trainer. The basketball player belongs to the small group of recognized personalities in international sport whose attitudes and merits have been honored with the " FIBA Order of Merit ". Miloslav Kříž lived in the Federal Republic of Germany from 1968 to 1971 . At that time he lived in Osnabrück . After his early return to the former ČSSR, the lawyer lived with his family in the town of Rožmitál pod Třemšínem (German Rosenthal), in the Středočeský kraj region ( Czech Republic ), located on the upper reaches of the Skalice .

Miloslav Kříž played for Uncas Prague from 1940 to 1943 and for BC Sparta Prague from 1944 to 1948 . This period is marked by the time of the Protectorate of Bohemia and Moravia under the Reich German Nazi dictatorship and the SS terror. This was followed by the post-war period when the Communist Party came to power in Czechoslovakia, in 1948 with the “ February revolution ”.

The FIBA ​​All Star players used included the national players Krešimir Ćosić (then Yugoslavia / Croatia ), Ivo Daneu (then Yugoslavia / Slovenia ), Radivoj Korać (then Yugoslavia / Serbia ), Emiliano Rodríguez ( Spain ) and Jiri Zidek (then ČSSR / Czech Republic), from the group of EuroLeague's 50 Greatest Contributors , the fifty most important personalities in the history of the ULEB Euroleague, named by the latter in a list published in 2008.

In the Bundesliga of the German Basketball Federation (DBB), Miloslav Kříž worked in the 1967/1968 and 1968/1969 seasons as a coach and coach for the Bundesliga basketball team at VfL Osnabrück . In the years before, VfL President Friedel Schwarze had always seen the need to hire a professional, successful coach from abroad in order to meet the requirements and the formulated objectives. The particularly high demands placed on a trainer and coach resulted from the fact that the VfL team had numerous national players and “strong personalities”. The commitment of the Prague trainer and coach was made possible because Friedel Schwarze succeeded in agreeing a financing model with the then DBB President Hans-Joachim Höfig in order to carry out the “work on the floor” of the VfL team, who is also the national coach of the men's national team. To remunerate head coaches appropriately. The cooperation between the first cup winner of the DBB (1967) and the DBB was planned for two years. VfL head coach Kříž was able to lead his new team to the runner-up championship in 1968 and to the German basketball championship in 1969. He also reached the final of the DBB Cup with the “VfL master team” in 1969, the year of the championship success.

One of the foundations for his success in the 1968/69 season was that, as a very experienced trainer and coach, he managed to integrate five young players, the later national players Meyer and Rupp were still youth players, into the "new" VfL team. The six Bundesliga players of the core team, Wilfried Böttger, Egon Homm , Ingbert Koppermann , the "Basketball Player of the Year 1969" Helmut Uhlig , the then "Mister Basketball" in Germany Klaus Weinand and the stateless "basketball virtuoso " Rassem Yahya sent VfL head coach Kříž in Training again and again with his usual soft voice and a friendly smile up the many stairs or the "infinitely numerous" steps of the grandstand of the Osnabrück Castle Wall Hall in a sprint to strengthen your fitness for the decisive moments of the championship games. Miloslav Kříž's successor in Osnabrück was the multiple Czechoslovak national player Karel Baroch, the most successful international basketball player who played in the then "VfL Osnabrück master team" (before and after Slavia Prague), as player-coach. Miloslav Kříž lived in the peace city of Osnabrück during this time. He worked at VfL without an assistant coach or assistant.

From 1968 to 1971 Miloslav Kříž was responsible for the DBB men's national team as a full-time national coach. His assistant coach was Günter Hagedorn , at the time initially the Bundesliga coach of ATV Düsseldorf and since 1969 head coach TuS 04 Leverkusen .

The coach and coach from the ČSSR was signed with the aim of forming a powerful national team for the 1972 Summer Olympics in Munich. In October 1968, the DBB coaching council , headed by DBB sportsman Anton Kartak ( USC Heidelberg ), appointed the fifty-strong "1972 Olympic squad" (" Kartak list "), who regularly trained together in two performance centers ( Heidelberg and Cologne ) , was equipped there with individual objectives and sporting homework. The squad players were also familiarized with the approaches of “mental training”.

For the following two major international tournaments, since the DBB was the host, the hurdles of qualification did not have to be overcome (at the FIBA ​​European Championship in 1971, Miloslav Kříž was no longer responsible as national coach at this tournament, the German national team took place 9, behind Romania and in front of France.). For professional reasons, the national coach Miloslav Kříž did not have the two internationally experienced centers Jörg Krüger and Klaus Weinand available to qualify. They both played for Germany at the 1972 Summer Olympics in Munich. Kříž, who had accepted a professional activity in the Federal Republic of Germany in the direct preliminary phase of the Prague Spring , could not continue his work as national trainer of the DBB in 1971 because the authorization to be able to work professionally abroad, a mandatory requirement for in the Federal Republic of Germany to be able to work as a trainer was not renewed by the authorities of the ČSSR. Kříž returned to his family in the ČSSR earlier than planned.

Basketball official in the ČSSR and in the Czech Republic

FIBA projects and functions in FIBA

Miloslav Kříž was closely associated with the Fédération Internationale de Basketball over a period of forty-four years, from 1956 to 2000, in an active cooperation. He is considered one of the internationally highly recognized and prominent former members of the FIBA ​​management level. Mainly he was active in the following functions:

The lawyer Kříž is one of the conceptual co-founders of the FIBA European Cup . In 1957, during the “FIBA Permanent Conference for Europe and the Mediterranean Basin”, Kříž was at that time a “Member of the Organizing Committee of the European zone of FIBA”, and afterwards, during the FIBA ​​European Championship in 1957 in Bulgaria, was im top management of the international basketball federation discussed the idea of ​​a cup competition for national champions at European level. FIBA Secretary General R. William Jones appointed a FIBA ​​project commission, of which Raimundo Saporta (Spain) was appointed and of which Miloslav Kříž became a member. In addition to them, Robert Busnel (France), Nikolai Semashko (USSR) and Borislav Stanković (Yugoslavia) were commissioned to develop a concept that proposed the establishment of a competition for the master teams of the FIBA ​​associations at European level. The decisive meeting of this commission took place in December 1957 in Gauting near Munich .

Kříž had submitted a well-founded proposal to FIBA ​​General Secretary R. William Jones, which included a FIBA ​​tournament for the six top performing clubs. This proposal was rejected by Jones to the Commission. Raimundo Saporta then initiated, after renewed intensive discussion and reached consensus in the appointed FIBA ​​project commission, the participation of the national champions of all the then member countries of the FIBA ​​zone Europe. As early as 1958, the first European Cup For Men's Champion Clubs was played, with twenty-two participating clubs. The cup was donated by the French sports daily L'Équipe . In order to keep the financial burden on the clubs low, groups were formed for the first round of the new European Cup competition according to the geographical location. The first European championship game was played on February 22, 1958 between Royal IV CSA Belgium and BBC Etzella Luxembourg (82:43 in the first game and 63:36 in the second leg). Other participants: Jonction BC (Geneva, Switzerland), BK Slovan Orbis (Prague / Czechoslovakia), Union Babenberg (Vienna / Austria), Honved SE (Budapest / Hungary), The Wolves (Amsterdam / Netherlands), BK Akademik (Sofia / Bulgaria), CJS Aleppo (Syria), ASK Olimpia (Ljubljana / Yugoslavia), Fenerbahce SK (Istanbul / Turkey), Panellinios GS (Athens / Greece), CCA Bucarest (Romania), Basket Villeurbanne (France), ASK (Riga / USSR ), HSG Wissenschaft HU (Berlin / East Germany), Pantterit (Helsinki / Finland), CWKS Legia (Warsaw / Poland), Simenthal Olimpia (Milano / Italia), Maccabi (Tel Aviv / Israel), FC Barreirense (Barreiro / Portugal) and Real Madrid (Spain). The first European Cup winner was ASK Riga . The introduction of the FIBA ​​European Cup is seen as one of the most important impulses for European basketball in the second half of the twentieth century - a "success story" with an extraordinarily high degree of effectiveness.

13 years after the end of the Second World War , it was not easy for the clubs and teams to meet the requirements of participating in the new FIBA ​​competition. The possibilities for communication and traveling to the away games were often very limited or almost impossible. The common standards for gaming operations first had to be developed. In the first few years, the sporting organization of the European Cup competitions was hampered by the influence of international politics, mainly due to the East-West conflict or the " Cold War ". For example, the Spanish government, under dictator Franco , prevented Real Madrid from traveling to the USSR for the European Cup match against ASK Riga. For the top European teams, participation in one of the European Cup competitions, despite the handicaps and difficulties that had to be overcome, gave them a wide range of options to significantly improve their income in order to be able to finance the game.

After his return from the Federal Republic of Germany to Prague, the center of his life at the time, in 1971, Kříž worked for more than fourteen years as the chief sports editor of the Czechoslovak press agency Česká tisková kancelář .

In June 2002, at the headquarters of the Fédération Internationale de Basketball (FIBA) in Geneva , Miloslav Kříž was awarded the important FIBA ​​award, the “ FIBA Order of Merit ”. He received this award as the forty-eighth personality, along with George E. Killian from the USA and Eugenio Korwin from Italy, in the presence of Jacques Rogge , President of the International Olympic Committee (IOC).

National coach of the German national basketball team of the DBB