Catholic parish church of the Assumption in Altpölla 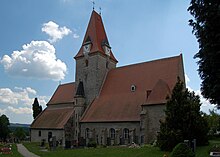 View over the cemetery to the north

The Roman Catholic parish church Altpölla stands on a hill in the west of the town of Altpölla in the market town of Pölla in the Zwettl district in Lower Austria . The church, consecrated to the Assumption of Mary , belongs to the deanery Horn in the diocese of St. Pölten and is one of the oldest parish churches in the Waldviertel . The Gothic staggered church with a Romanesque core is a listed building .

The original building, a Romanesque east tower church with a presumed round apse , was built in two phases before and in the middle of the 12th century. Around 1300 a chapel with a crypt was added to the south . The Gothic choir dates from the second third of the 14th century . After it was destroyed by the Hussites around the middle of the 15th century, the 14th century north aisle and the sacristy were rebuilt and the south aisle, designated 1467, was rebuilt. In 1898 the neo-Gothic church tower and in 1906 the stair tower on the north side were built. In 1951/54 the church was restored.

The exterior of the church has been redesigned several times over the years and is today characterized by the Gothic extensions. The broad nave made of quarry stone masonry , which is now unplastered, has a high, bent gable roof . The Romanesque west front is pierced by pointed arched windows in the area of ​​the central nave and by two Romanesque round arched windows on the side . In the neo-Gothic porch there are arched windows between buttresses . The chapel choir in the southeast is early Gothic. It has tracery windows and a five-eighth closure. From the choir square rises above the Romanesque base a neo-Gothic tower with pointed arched sound windows , clock bead and a pointed hipped roof. In 1906 the polygonal , neo-Gothic stair tower was built on the north side. The high Gothic choir with two-tiered buttresses has two-part tracery windows. The sacristy extension on the north side with arched windows and small Gothic quatrefoil window dates from the middle of the 15th century and was expanded in the 18th century.

The Romanesque central nave of the three-aisled nave was originally flat , but was vaulted in the middle of the 15th century with a three-bay ribbed vault on chamfered services with coat of arms and rosette keystones and opened in pointed arcades to the side aisles. An early Gothic frieze - a stencil painting from the mid-14th century - can still be seen in the attic under the beginnings of the former wooden ceiling . The music gallery in the central nave is vaulted under a flat arch and is mentioned in a document in 1706.

At the east end of the central nave is the Romanesque choir square from the first half of the 14th century. This is followed by a slightly raised two-bay choir with a five-eighths ending . It has a ribbed vault on grooved capitals with coffin cornices and horn consoles . The reliefs of the three keystones of the vault represent the Lamb of God , the sun and the moon . The pointed-arched niche in the choir probably dates from the 15th century.

The slightly raised, one-bay south chapel with choir bay now serves as the choir of the south aisle. It has an ogival choir arch and, like the central nave, a five-eighth end. Bundle services carry a ribbed vault with rosette keystones. The south aisle has three cross-rib vaulted yokes and is marked 1467 on the central keystone. A late Gothic, barred shoulder arch portal leads to the choir entrance.

The cross-rib vaulted north nave originally had five bays. The western yoke was bricked up in the middle of the 19th century when the gallery was built.

In the choir bay of the south chapel there is a wall painting from the first half of the 14th century, which shows the donation of the coat of Saint Martin of Tours . The fresco was uncovered and secured during the restoration of the church in 1954.

The neo-Gothic high altar with the figural group of the Assumption and Coronation , flanked by the Saints Leopold , Katharina and Barbara , was made in 1906 by Michael Plakolb and Michael Hochmuth. The altar of the south aisle has a marble mensa by Josef Friedl from 1954 with an altar panel of the Crucifixion of Christ from around 1780. The altar of the north aisle has an altar panel of the Heart of Jesus , marked F. Mayerhofer 1884 .

The early baroque pulpit with Madonna and evangelist figures in niches between winding columns dates from the end of the 17th century . The sound cover is carried by two large angel figures .

The organ was made by Franz Jüstel in 1848. Additional features include: console statues of Saints Florian and Sebastian from the first half of the 19th century; Figures of the coronation of Christ and the Madonna of the protective cloak by Paul Pleschke from 1951; a former high altar painting of the Assumption, inscribed with JL Daysinger 1780 on the north choir wall; Stations of the Cross by Eduard Hofecker from 1932; a baroque baptismal font from the middle of the 18th century with a group of figures of the baptism of Christ on the lid. Most of the church bells date from the 13th century; underneath is the oldest piece of the church inventory, a 320-kg, as-cast Septimglocke from the second half of the 13th century, which is one of the oldest bells in Lower Austria. It bears the Latin inscription ME RESONATE PIA MISERIS SVCVRRE MARIA AGLA TETRAGRAMMATON MESSIAH . Another bell was made by Valentin Schreiber in 1564.

The inventory of the church includes several tombstones and tombstones: