from Wikipedia, the free encyclopedia
This is the spotted version , flagged on May 27, 2020 . There are 2 pending changes that have yet to be viewed.

This article covers Philippine Airlines , the Philippine airline . This is not to be confused with Air Philippines

Philippine Airlines (originally Philippine Air Lines , PAL for short ) is the national airline of the Philippines , based in Manila and based at Ninoy Aquino International Airport .

Philippine Airlines was founded on February 26, 1941 by several business people and is the oldest operating Asian airline. In March 1941, a Beechcraft Model 18 began flight operations. The daily route was the route between Manila and Baguio. Due to the Japanese invasion of the Philippines during World War II, flight operations had to be suspended at the end of 1941.

After the liberation, the airline resumed its flight operations on February 14, 1946 with five Douglas DC-3s ; 15 destinations have now been flown to. In the same year PAL commissioned the US American Transocean Air Lines with the implementation of their long-haul flights to the USA and Europe; Philippine Airlines was the first Asian airline to offer flights to California , albeit not with its own aircraft. In 1947 Philippine Airlines took over Far East Air Transport and with it the routes to Bangkok , Hong Kong , Shanghai , Calcutta and later Madrid as well as the inventory of five Douglas DC-4s . In the same year, PAL opened a line connection from Manila to San Francisco .

In 1954 all international flights - with the exception of the route to Hong Kong - were suspended. The national route network has been expanded considerably for this purpose. It was not until 1962 that the first international route to San Francisco was reopened in cooperation with KLM .

In 1996 the company received the first Airbus A340-300 . A further modification of the fleet was planned for 1998, but on September 23, 1998 Philippine Airlines had to cease operations due to prolonged staff strikes and the Asian crisis with the associated financial problems. Operations resumed a few weeks later after the route network had been severely restricted, parts of the fleet had been sold or returned, and staff had been cut. 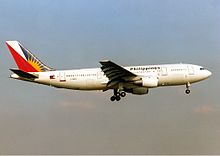 In 2000, the airline returned to profitability after six bad years. A profit of around 44.2 million pesos was reported . In the same year the company sold the hangar business to Lufthansa Technik , which took over the maintenance of PAL's aircraft. A system has also been introduced that allows bookings to be made by email . In 2001 a profit of 419 million pesos was made. International business resumed with destinations in Southeast Asia, Australia and Vancouver in Canada. A frequent flyer program was also introduced.

In 2003 PAL procured a new Boeing 747-400 , the fifth machine of this type in its fleet. In the same year Las Vegas was added to the program as well as the European destinations Paris and Amsterdam with codeshare agreements with Air France and KLM . Due to the merger of Air France and KLM, Paris had to be deleted from the program again. The fleet was renewed with two Airbus A320-200s . E-ticketing was introduced.

After 15 years, Beijing was flown again in 2005 . Eight new Airbus were ordered and four leased. The takeover of an A319-100 was postponed because Philippine Airlines did not have enough pilots.

On March 30, 2010, the airline, like all other airlines in the country, was placed on the list of operating bans for the airspace of the European Union . The European Commission justified this with the insufficient security standards for the EU. This decision was reversed on July 10, 2013, which means that flights into EU airspace are again permitted.

Destinations of the PAL

Philippine Airlines flies from its hubs in Manila and Mactan-Cebu to destinations in the Middle East , Australia , North America and many cities in Asia . In Europe only London Heathrow is served.

Airbus A320-200 of Philippine Airlines

Airbus A330-300 of Philippine Airlines

As of March 2020, the Philippine Airlines fleet consists of 71 aircraft with an average age of 5.4 years: 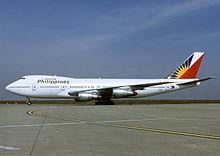 In the past, Philippine Airlines operated, among others, the following types of aircraft: