The Plansee is located in the Reutte district , Tyrol , Austria within the Ammergau Alps . With an area of ​​almost 3 km², it is the second largest natural lake in Tyrol.

The lake is located in the area of ​​the municipalities of Heiterwang , Reutte and Breitenwang around 7 km as the crow flies southwest of the Ammersattel . It is connected by a 300 m long canal built in 1908 with the originally 68 cm higher lake Heiterwang , from which, in addition to the other tributaries Spießbach and Torsäulenbach , it draws its water. The Spießbach flows into the southeast, the Torsäulenbach coming from the Ammersattel at the northeastern end of the lake. In the northwest, the Plansee has an outflow through the so-called Kleiner Plansee and over the Archbach to the Lech . It has two basins with a depth of 77 and 72 m on a total area of ​​2.87 km², making it the largest lake in Ausserfern .

On the north bank of the lake through the runs Ammersattel leading Planseestraße (L 255) between Reutte and Ettal or Oberammergau .

Heiterwanger See (in front) and Plansee with a connecting canal, aerial view from the southwest 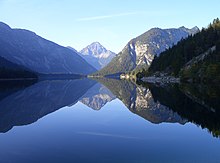 View from the riverside road to Thaneller and Tauern

Plansee and Heiterwanger See are presumably the remains of an Ice Age meltwater reservoir that once covered the entire intermediate gate as far as the Ehrwald basin .

The lake is mentioned for the first time in a border description of the Diocese of Freising from the years 1073/78 as Planse , other early forms of name are Please , Plense and Plase . The fishing rights at Plansee were held by the Tyrolean sovereigns and the Steingaden monastery , and in the 15th century the Stams monastery was donated or acquired . Duke Siegmund and his successor, Emperor Maximilian I tried to get the best fishing waters in the country into their hands and, like the Achensee from the Georgenberg monastery, had the Plansee ceded by the Stams monastery. In Maximilian's fishing book of 1500, the Aiterwanger and the Plaan See are already described as two particularly important lakes for the Prince's hunting and fishing pleasure . However Stams insisted on his right hand and got a limited fishing rights conceded that in a treaty of 1631 by Archduke Leopold V was confirmed.

In 1902 the Plansee power plant was put into operation, in 1908 the canal to Heiterwanger See was built, which was widened in 1951. Liners have been operating on the lake since 1927.

The natural catchment area of the Plansee is 115.5 km². In order to increase the amount of water available for power plant operation, water from the Rotlech and one of its feeders is fed to the Plansee, increasing the catchment area by 75.0 km². The mean discharge is 6.9 m³ / s, the (theoretical) water renewal time 0.6 years.

Similar to Lake Heiterwang, the Plansee's low biomass of floating algae and the high visibility (up to 15 m, in 2012 annual mean 7.25 m) demonstrate nutrient deficiency and thus a stable oligotrophic state. The bathing water quality was rated as excellent in 2013. Despite the high water quality, the overall ecological condition is only assessed as moderate by the power plant operation due to the fluctuations in the lake level.

To those found in Plansee fish species include grayling , brown trout , minnow , perch , gudgeon , carp , Koppe , rainbow trout , whitefish , roach , tench , lake trout and Arctic char . In contrast to Lake Heiterwang, the Plansee is insignificant for water birds. The large, isolated occurrence of the jackdaw shrimp is probably due to artificial stocking, possibly from northern Italy.

MS Wilhelm on the Plansee

The lake is used together with the Heiterwanger See by the Reutte electricity works as a storage facility; in the winter months the water level is lowered by up to 5 m. The usable storage capacity is 20.8 million m³.

One of the highest commercial shipping lines in Austria operates on Plan- and Heiterwanger See and offers round trips from the end of May until autumn. Boarding points are at the three hotels "Forelle", "Seespitze" and "Fischer am See".

The lake is used in summer for swimming and various water sports such as surfing, sailing, diving and fishing, and in winter for ice skating and curling. In the village of the same name, Plansee (municipality of Breitenwang), there is a camping site, the “Forelle” hotel, an alpine pasture with a show dairy and restaurant, as well as a scheduled landing stage .