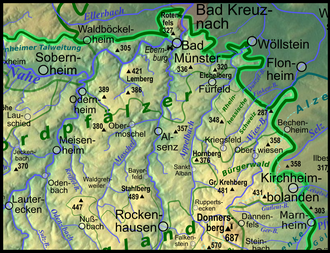 The rocky north-east of the North Palatinate highlands in the districts of Alzey-Worms , Bad Kreuznach and Donnersbergkreis is referred to as Rheinhessische Schweiz . It essentially consists of the narrowly separated natural areas of the Wiesener Randhöhen (29.9 km²; see below ) and the Neubamberger Riegel to the north (8.9 km²; see below ), which is part of the porphyry mountain region of Münster am Stein .

A landscape protection and local recreation area in the west of the Rheinhessen region and immediately to the north-west of it has been named after Rheinhessen Switzerland since 1961 , which spares the parts of the Donnersbergkreis on the Wiesener Randhöhen and in the Alzey-Worms district also the Kappelberg to the south in the extreme northeast of the Natural area Bürgerwald contains , whereby the complete portion of the district is included in the North Palatinate Bergland. With the addition of a corridor between the two partial landscapes as well as peripheral landscapes of other natural areas (see list and map ), including those of the Rheinhessisches Tafel- und Hügelland , the area grew to 67.66 km².

The Wiesener Randhöhen natural area also includes Mörsfeld from the Donnersbergkreis , the uninhabited northeast of Kriegsfeld and minimal parts in the extreme east of Niederhausen an der Appel , the Neu-Bamberger Riegel natural area contains the Martinsberg in the southeast of the Siefersheimer district along with NSG outside the LSG boundaries (see sections Mountains and nature reserves ).

The boundaries of the landscape protection area have been completely laid in the south and largely on municipal boundaries in the west. Only the north-west of Tiefenthal and the south of Fürfeld are separated by border lines along state roads and an approximately 1.9 km long section of federal highway 420 , which is also the north-east of Frei-Laubersheim and in a further 4.4 km long section as the northern border outsourced the northwest of Wöllstein. Between the two sections, the federal road runs for around 1.4 km in a north direction, roughly along the western border of the Neu-Bamberger Riegel natural area.

The eastern border follows state roads in the north completely through the outskirts of Wöllstein, Siefersheim, Wonsheim, Wendelsheim and Erbes-Niedesheim, in a very short intermediate section between Erbes-Büdesheim and Nack also for about 3 km of a local road and a district road to continue to Bechenheim again to follow a country road. Only in the far south-east does it follow the forest border of the Kappelberg for about 2 km on the Offenheim district.

The 29.9 km² Wiesener Randhöhen natural area in the northeast of the North Palatinate Uplands in the districts of Alzey-Worms , Bad Kreuznach (only very small shares) and Donnersbergkreis is framed clockwise by the following locations (the approximate area shares in brackets):

In the interior of the landscape are Nieder-Wiesen in the southeast (4.6 km²) and Mörsfeld in the west (3.9 km²). With the exception of the two places and clearings around them and in the direction of the war field, the natural area is almost entirely wooded and, apart from to the south, where the Bürgerwald adjoins the 358 m high Kappelberg , it is also separated from the neighboring natural areas by its forest .

The soils are very poor in nutrients. The landscape is drained by the Wiesbach in the east and the Finkenbach in the west towards the northeast. In the east of the natural area, on the west and north-west slopes of the Ahrenberg , lies the 64.99 hectare nature reserve Arenberg-Dreigemeindewald .

The 8.9 km² natural area Neubamberger Riegel in the extreme northeast of the North Palatinate Uplands and in the extreme east of the Porphyry Mountains sub-landscape of Münster am Stein is located with its eastern half in the Alzey-Worms district and the western half in the Bad Kreuznach district . It is framed clockwise by the following locations (the approximate area proportions in brackets):

The natural area lies completely outside the settlement areas and is partly forested. Central to the west, the Appelbach has created a breakthrough valley towards the north. In the western part there is a porphyry quarry, from which the landscape rises in a south-westerly direction to the 320 m high, completely wooded Eichelberg . Heathland landscapes can be found on the unwooded slopes . In the very small area there are six nature reserves, some of which are divided into several parts ( see below ).

In the landscape protection area, the following surveys are in particular (in brackets the height above sea level, followed by the respective natural area and the district's vehicle code):

The following nature reserves are in the Rheinhessische Schweiz nature reserve (the area in hectares in brackets , followed by the respective natural area and the district's vehicle code):