Bevern is located on the Weser in the Weser Uplands , embedded by the Solling , Vogler and Ith mountains .

The integrated community includes the member communities Golmbach , Holenberg , Negenborn and the spots of Bevern .

The joint congregation was founded on January 1, 1973. For further history see under the four member communities. 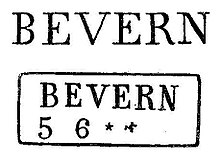 Bevern already had its post office before 1790. It is assumed that it was set up as early as 1743 with the establishment of the driving post from Braunschweig to Holzminden. Letters from this period have a handwritten place note.

The later Bevern post-expedition also existed in the time of the Kingdom of Westphalia . The single-line local postmark "Bevern" is known from this time, around 1812.

After the expulsion of the French, the now Brunswick Post continued with the same stamp. Since 1836 the date has been handwritten in numerals. In 1833 a post office was given for Bevern. In 1852 the postman Friedrich Mönkemeyer (1833–1850) died. His successor was foreman August Uhden as postal expedition (1850–1873), as reported in the Post General Circular. In 1852 the post in Bevern was given the status of a post expedition. In 1854 Bevern received a two-line rectangular stamp. Since 1856 the postage stamps have also been canceled with the grate stamp "3".

From the population of the joint municipality are

The council of the integrated municipality of Bevern consists of 16 councilors and councilors and were last elected for five years by local elections. The current term of office began on November 1, 2016 and ends on October 31, 2021. The election for the full-time mayor will take place on May 26, 2019 at the same time as the European elections.

The full-time mayor Harald Stock (non-attached) is also entitled to vote in the joint municipal council.

The full-time mayor of the joint municipality of Bevern is Harald Stock (SPD). In the last mayoral election on September 11, 2011, he was elected with 56.0% of the vote. His term of office runs until October 31, 2019. His opponent Thomas Junker (CDU) received 44.0% of the vote. The turnout was 62.9%. Stock took up his post on November 1, 2011, replacing the previous incumbent Günter Schlag, who was no longer a candidate.

The coat of arms of the municipality of Bevern shows, divided from green and red by a blue wavy band, a golden Renaissance castle above, twice below with two black bars that border the stake, on the right a silver spring well, in the middle three golden cones (2nd floor) : 1), on the left a silver brick well with a bucket.

A “Strategic Planning” working group was initiated for the first time in Bevern by means of a citizens' application with the aim of a development concept supported by citizens. The working basis for this is the proven strategy theory " Bottleneck-focused strategy ". Bevern becomes a pilot project for systematic local development in the Holzminden economic area.

Integrated communities in the Holzminden district