Schistosomiasis , also called schistosomiasis , is a worm disease caused by the larvae of flukes of the genus Pärchenegel (Schistosoma) . It is spread in warm inland waters by snails as intermediate hosts . 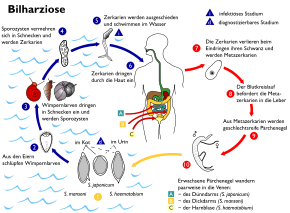 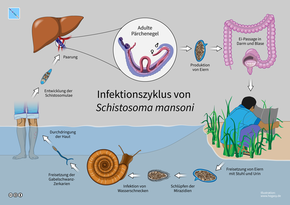 Pathogens are 1–2 cm long flukes of the genus Pärchenegel . The eyelash larvae of the flukes attack water snails living in warm, calm freshwater bodies . In them, the eyelash larvae develop into sporocysts . These reproduce asexually and develop into cercariae . These are then excreted by the water snails and swim freely in the water. When the cercaries encounter people swimming or wading in the water, they dig their way through their skin. They then migrate via lymph and blood vessels to the liver , where they mature into adult pair of leeches. The pair of leeches settle in the wall of the urinary bladder , the large intestine , or the small intestine . From there, they release fertilized eggs into the bladder or intestines. The eggs end up in surface waters in the sewage of the sanitary facilities. There they develop into eyelash larvae that can be eaten by freshwater snails. This completes the parasite's cycle of reproduction. A direct transmission from person to person is excluded.

A distinction is made between several schistosomiasis pathogens: Schistosoma haematobium causes bladder bilharzia (urogenital schistosomiasis). The urinary tract and the urinary bladder are primarily affected. In contrast, S. mansoni , S. intercalatum , S. japonicum and S. mekongi attack the intestine and can cause intestinal bilharzia (intestinal schistosomiasis). An extremely troublesome, but otherwise mostly harmless infection with different Trichobilharzia species (parasitizes waterfowl) is known as cercaria or cercariae dermatitis (see there for details), whereby for Trichobilharzia regenti damage to the neurons and the central nervous system for humans cannot be excluded.

Bladder bilharzia may already appear as an Aaa disease in the ancient Egyptian Ebers papyrus . The name of the disease goes back to the German tropical doctor Theodor Bilharz , who discovered the pathogen during autopsies in a Cairo clinic in 1851. Initially, the parasite was named bilharzia after its discoverer .

The doctor, bacteriologist and founder of paleopathology Marc Armand Ruffer was able to prove in his systematic examinations of thousands of mummies , mummy remains and skeletons at the beginning of the 20th century that schistosomiasis was already widespread in ancient Egypt in the 20th dynasty . It may have been the same as Aaa disease .

The disease is most common in Japan , China , the Philippines , Africa , the Arabian Peninsula , South America , the Caribbean, and the Middle East . It is estimated that around 250 to 300 million people are infected with the parasite and 600 million are at risk. Dam construction, such as the Aswan Dam in Egypt and irrigation projects, increases the risk of illness.

There have been confirmed infections in Corsica since 2011 . Locals and tourists who have had contact with the water of the Cavu / Cavo river near the town of Sainte-Lucie-de-Porto-Vecchio (north of Porto-Vecchio ) in the southeast of the island are affected . Cases have been diagnosed in tourists from France , Germany and Austria .

The species Schistosoma haematobium in Corsica, which is infectious to humans, contains a quarter of the genetic material from the beef pair leeches, Schistosoma bovis . The hybrid population attacks southern European snails such as the alternative species Bulinus truncatus in the Cavu River and related snails. Such hybrids had been known from Senegal since 2008; they cause a severe course of the disease.

Course of the disease and signs

The first symptoms are itching at the point of entry of the larvae and the formation of a skin rash , cervical dermatitis. The cercariae can also penetrate through healthy skin unnoticed.

Schistosoma haematobium then migrates through the tissue and after about 3–4 weeks into the lungs, which can lead to allergic reactions with edema formation , wheals , cough and fever, the katayama fever . Schistosoma haematobium cercariae then nest in the bladder wall and release eggs into the tissue. The eggs can penetrate tissue towards the bladder lumen and are excreted with the urine. When they pass through tissue, the eggs cause a cellular inflammatory reaction in the bladder wall, and so-called egg granulomas develop . Since schistosomes can survive for up to 20 years in the (perivesicular) tissue near the bladder wall and constantly lay eggs, the chronic inflammation leads to problems urinating , blood in the urine, scarring, and the elasticity of the bladder wall slowly disappears. In rare cases, by the chronic infection squamous epithelium - carcinoma ( bladder cancer ) are formed, whereby the infection then a precancer represents. (This of Schistosoma haematobium (bilharzii) caused "Occupational Cancer" of working in the Nile mud fellah was in 1888 as "Bilharziacarcinom" recognized).

The cercariae of Schistosoma mansoni migrate into the intestinal wall and cause similar reactions there. Here, too, the eggs cause egg granulomas in the intestinal wall, chronic inflammation and polyposis . Liver and spleen-related (hepatolienal) schistosome types lead to periportal (structures of the liver tissue between the liver lobules) fibrosis of the liver with portal hypertension (increase in blood pressure in the portal vein from normally 3–6 mmHg to over 12 mmHg) and enlargement of the spleen. Cerebral schistosomiasis can rarely develop. A life-threatening course of the disease can occur in all stages of the disease.

As a rule, direct egg detection in the stool for S. mansoni ( Kato-Katz test ) or immunological rapid tests (e.g. the CCA point-of-care test) are used as diagnostic tests , although their test sensitivity is limited. A highly sensitive detection is in principle possible with newer, molecular test methods, but these are still too expensive for use in diseases of poverty. In order to achieve the control and possibly the eradication of this disease in accordance with the global development goals of the UN, there is therefore a need for new, sensitive, specific, inexpensive tests that meet the ASSURED criteria of the WHO.

Schistosomiasis is treated with praziquantel for infections with adult schistosomes (in the event of treatment failure - against Schistosoma mansoni - oxamniquin can also be considered). Katayama syndrome is treated symptomatically with fluids, antihistamines and possibly with corticosteroids, as anti-parasitic therapy is not or only partially effective. Merck KGaA has been working with the World Health Organization (WHO) to eradicate schistosomiasis since 2007 . Merck will produce over 25 million praziquantel tablets annually for the WHO free of charge for ten years. This means that 27 million children can be treated. In 2012, Merck announced that it would increase the number of tablets donated annually to 250 million tenfold. According to the WHO, around 62 million people worldwide were treated for schistosomiasis in 2014, while 150 million infected people could not receive antidotes.

In 1989, Aklilu Lemma and Legesse received Wolde-Yohannes for their research into the properties of the endod plant ( Phytolacca dodecandra , see : pokeweed ) as an inexpensive preventive against schistosomiasis and for their struggle to overcome the bias of Western medicine against third world research the Right Livelihood Award . In 2008, the effectiveness of oxadiazole derivatives against the pair of leeches was discovered. Schistosomiasis vaccines are also being developed.