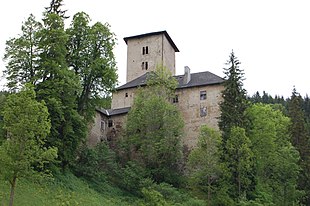 North side from the foot of the Schlossberg

Waldenstein Castle is located between Bad St. Leonhard in Lavanttal and Wolfsberg in north-eastern Carinthia ( Austria ).

Originally built as a castle, Waldenstein Castle is located in a side valley of the Lavant Valley at an altitude of about 760 meters. It belongs to the cadastral community of Waldenstein, which belongs to Wolfsberg, and is located above the road leading to the Packsattel .

Construction of the castle and conversion to a palace

It was built as a castle around 1150 on behalf of the Bamberg diocese . From the 12th to the 17th century, the Lords of Ungnad von Sonnegg were the feudal bearers and owners of Waldenstein. They had the castle converted into a Gothic style castle in the 15th century . In the 16th century, Waldenstein was a center of the Reformation .

Waldenstein Castle and the Reformation period

Hans von Ungnad invested the majority of his assets in a printing company in Urach near Tübingen . There, the evangelical country pastor Primož Trubar , who comes from the Ljubljana area and is considered the creator of the Slovene written language, translated Luther's writings with the help of Georg Dalmatin in order to spread the controversial doctrine of the Reformation in his native Slovenia. When the printing company in Urach was closed, a printing press and the old Glagolitic, Cyrillic and Latin letters are said to have been brought to Waldenstein. However, nothing certain is known about the future whereabouts of the printing material. It has been suggested that Napoleon's soldiers, who occupied parts of the Lavant Valley in the early 19th century, later dragged the Ungnad printing press to Paris. Hans Ungnad, who made the reformation of the Slovenes possible and ultimately financed it, left his home country Carinthia in 1557 and moved to Winteritz in Bohemia, where he died in 1564. In 1607, Simon Ungnad, the last male offspring of the noble family, died.

When Simon, the last disgrace of Weißenwolff auf Waldenstein, died in 1607, his granddaughter Margarethe-Elisabeth Landgravine of Hesse inherited the rule. The constant conflicts with her land neighbor, the diocese of Bamberg , were too much for her. It sold Waldenstein in 1637 to the Bishop of Bamberg, who in 1672 left it to his Vice Cathedral in Carinthia, Peter Philipp von Dernbach , for sale. From 1700 to 1754 the estate belonged to Count Rudolf Franz Erwein von Schönborn , who also put the hammer mill there back into operation. From his grandson Hugo Damian von Schönborn, the property was transferred to the Wolfsberg iron dealer Johann Michael Offner in Kaufweg in 1803. The merchant Friedrich Ludwig Westenholz owned the estate from 1842 to 1851.

In 1835, Josef Ritter von Rainer-Harbach from Wolfsberg set a poem by Johann Thaurer Ritter von Gallenstein at Waldenstein Castle . The song was officially declared a Carinthian Heimatlied in 1911 .

In 1851, Count Hugo Henckel von Donnersmarck acquired the castle. He pushed the old mining in the Waldensteiner Graben. Iron mica is still mined there today , which is mainly used in the manufacture of high-quality metal and anti-rust paints. The castle is a listed building and is owned by Kärntner Montanindustrie GmbH. In the 20th century there were apartments in the building in which employees of the Waldenstein mining industry lived with their families. Today the castle is empty. Viewing is only possible from the outside.

North side at the level of the access road

The square keep from the 13th century is Romanesque and originally stood free. The adjoining three to four- story Gothic residential buildings are additions from the 14th to 16th centuries. In the middle of the palace there is an almost square, approximately 115 m² courtyard with a fountain. A flight of stairs in the courtyard leads to the upper floor with its Renaissance arcade corridor. On the south side is the former main gate, which was secured with a drawbridge. Today you enter the castle through the gate in the east, where the prisons were also located. In the southeastern part of the castle is the former castle chapel, which has a baroque tower and was consecrated to Mater Dolorosa .