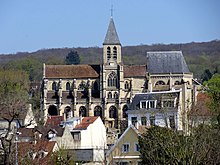 View from the Seine

The Catholic parish church of Saint-Martin in Triel-sur-Seine , a parish in the Yvelines department in the French region of Île-de-France , was built in the first half of the 13th century on the model of the Notre-Dame Cathedral in Paris in the style of Gothic built. Numerous stained glass windows from the 16th century have been preserved in the church. In 1862, the church consecrated to St. Martin was added to the list of architectural monuments ( Base Mérimée ) in France as Monument historique .

In the 13th century the three-aisled nave , the two single-bay transept arms and the original choir were built. The triforium and the upper aisle windows were renewed at the end of the 13th century. At the end of the 15th century, another aisle was added to the south, the north aisle changed and the chapel of the Confrérie de la Charité (brotherhood of Christian love) added to the north-east, next to the choir and the transept . Around 1550 a new choir was built, which joined the old choir in the east, but was shifted one yoke to the north. Under the first yoke of the new choir runs an old path, called chemin du Roi (King's Path ), from which there is access to the crypt below the choir .

Nothing is known about the time the four tower was built . It is covered with a hipped roof and was restored in 1910.

In the west of the south aisle there is the portal in an open vestibule. The tympanum from the late 15th century is badly weathered. The wood-carved door leaves were created around 1530 and decorated in the Renaissance style with arabesques, portrait medallions and the coat of arms of the Gallet family. 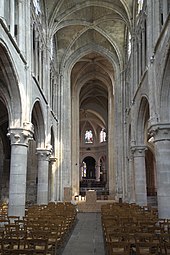 The nave, the four western bays of the north aisle and the first south aisle have been preserved from the 13th century church. The two side aisles still have their original vaults, while the original triforium has been preserved in the right arm of the transept .

Numerous Renaissance windows are preserved in the church, dating from 1520 to the 1550s. They are attributed to workshops in Paris and Beauvais where the Pinaigrier family and the glass painter Engrand Leprince and his sons Jean and Nicolas worked. 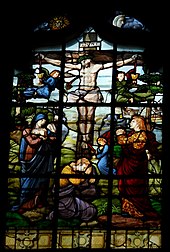 Another window depicting the crucifixion of Christ is on the high wall of the choir. Blood flows from the wounds of Jesus and is caught in bowls by angels. To the right of the cross stands Mary , to the left the Apostle John . Mary Magdalene kneels at the foot of the cross.