The title of this article is ambiguous. Further meanings are listed under Theißen (disambiguation) .

Theißen is a district of the city of Zeitz in the Burgenland district in Saxony-Anhalt (Germany). 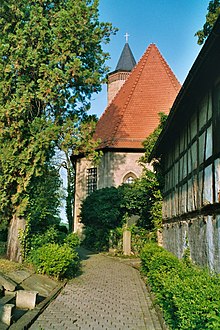 Theißen is located immediately north of the Mittelzentrum and the administrative seat of Zeitz. Large cities in the vicinity are Gera , Leipzig and Halle .

The place is on the edge of the Leipzig lowland bay and has major differences in altitude to note in its area. The market square (Platz der Einheit) is located about 167 meters above sea level and is therefore the lowest point on the district.

The only natural body of water is the Maibach, which flows through the village and flows a few kilometers further east into the White Elster . Most of the stream was piped up as early as 1914.

Open pit holes left by lignite mining now form small lakes in the immediate vicinity, which, however, are partly closed to access due to the risk of collapse.

Theißen was probably first mentioned in a document in 1153 and was an agricultural village until around 1830. From then on, lignite mining began to change the entire region north of Zeitz economically and in terms of landscape. With the rapid onset of industrialization, the municipality in the south of the richest Prussian province of Saxony was connected to the Zeitz-Weißenfels railway line (1859).

During the economic crisis in Germany in 1923, 10,000 miners went on a hunger march from Theißen to Zeitz, during which eleven protesters were shot. A memorial in honor of those killed is now on Unity Square. In 1926 a lignite power plant was put into operation. In 1928 the compulsory incorporation of the previously independent village of Reussen took place. At the end of World War II , American troops marched in on April 12, 1945. With the end of the American occupation, Theissen became part of the Soviet zone of occupation and thus later of the GDR, in accordance with the decisions of the Potsdam Conference .

Since the German reunification in 1990 the place belongs to Saxony-Anhalt. In the years that followed, numerous streets were renovated in connection with important commercial settlements. At the end of the 1990s, the “Am Sandberg” residential area was built.

As part of the regional reform in Saxony-Anhalt, incorporation into the city of Zeitz was already under discussion in 2003 . After the relevant contract had already been drawn up, the majority of voters nevertheless voted against it in a citizens' survey. The majority of the municipal council agreed with this result.

From 2005 to 2009 Theissen was part of the Zeitzer Land administrative community .

The local mayor of the municipality of Theißen is Thomas Ham.

The coat of arms was awarded on August 24, 1936 by the Upper President of the Province of Saxony.

The church has a Trampeli organ from 1794 and one of the few Theophilus bells available in Germany .

The most important company with its headquarters on site is the Mitteldeutsche Braunkohlengesellschaft (MIBRAG) with a total of around 2,000 employees. In 1993 Globus Handelshof AG built a hypermarket. This is the second largest employer after MIBRAG, there are also numerous medium-sized companies.

Districts of the city of Zeitz