This article covers inertia versus spin. For the "resistance" against bending or torsion, see moment of area .

The moment of inertia , also mass moment of inertia or inertial moment , indicates the inertia of a rigid body in relation to a change in its angular velocity when rotating around a given axis ( torque divided by angular acceleration ). It thus plays the same role as mass in the relationship between force and acceleration ; therefore the term rotating mass is also used in the older literature . It appears as a physical quantity for the first time in 1749 in the work Scientia Navalis by Leonhard Euler .

If the axis of rotation is not fixed, a single number is not sufficient to describe the inertia behavior. The moment of inertia for any axis through the center of gravity can be calculated from the inertia tensor .

When Seiltanz be as Balancierhilfe preferred long rods. Compared to a compact body of the same weight, such as a sandbag, such a rod has a very large moment of inertia. Tilting to the side is not prevented by this, but slowed down so that the artist has enough time for a compensatory movement.

You can easily try out the effect yourself: a 30 cm ruler (shorter is more difficult) can be balanced upright on the palm of your hand. However, placed sideways on one of its long edges, it falls over completely before you can react. In both cases, the axis of rotation is the edge lying on top, while the center square of the distance from this axis differs greatly at over 900 cm 2 or around 16 cm 2 .

Another simple experiment can be used to illustrate a change in the moment of inertia. You sit in the middle of a swiveling office chair and can be made to rotate with your arms and legs stretched out. If you then pull your arms and legs towards your body, the moment of inertia decreases. This leads to the fact that the rotary motion becomes faster because the angular momentum is retained (see conservation of angular momentum ). Reaching out again slows down the movement. To increase the effect, you can put heavy objects in each hand, such as dumbbells. The greater their mass, the more pronounced the effect.

A similar example is the pirouette effect known from figure skating . The speed of rotation can be controlled solely from the displacement of the body mass relative to the axis of rotation. If the figure skater draws his arms or straightens up from a crouching position, he turns faster - there is no need to take another swing.

The most common symbols for the moment of inertia are and , going back to the Latin word iners , which means inactive and lazy. Since both symbols are also used in electrical engineering, a (large theta ) is still in use. This article is used throughout .

Comparison with the mass in linear motion

The moment of inertia in a rotating movement is comparable to the mass of a linear (straight) movement (for details see Rotation (physics) #Comparison with translational movement ). Compare the following equations:

If the mass distribution of a body is known, the mass moment of inertia can be calculated from the following volume integral:

The part of (see adjacent figure) that is perpendicular to the axis of rotation ( angular velocity ) is here .

Motivation of the definition

Shown is an arbitrarily shaped mass distribution of density that rotates around the axis . A mass element of this distribution has the distance from the axis of rotation and the path speed .

Here is the speed of the ith mass point. Now the whole body should rotate around the axis . Each individual mass point therefore describes a circular path. The orbital velocity of a particle that rotates on a circular path with a radius at the angular velocity can be calculated as. Hence it follows:

Analogous to the definition of kinetic energy

With this definition one can identify the following sizes of rotating mass points with the sizes of linearly moved mass points:

If you choose the z-axis of the coordinate system in the direction of the axis of rotation, the following practical equation can be derived:

given. The transition to the integral with the volume of the body composed of the infinitesimal mass elements results

This results in the general definition of the moment of inertia given above with a location-dependent (i.e. generally inhomogeneous) mass density .

Relationship between moment of inertia and angular momentum

The total angular momentum of the rigid body shows i. A. not in the same direction as the angular velocity . The axis-parallel component, however, is given by. This can be seen as follows. The position vector of an individual mass element is divided into a part that is parallel and one that is perpendicular to it. The parallel portion of the position vector does not contribute to the axis-parallel component of the angular momentum of this mass element , it remains:

With a homogeneous mass distribution, the density is locally constant. The density can be pulled in front of the integral and the formula for the moment of inertia is simplified to

An example calculation is given below.

Moment of inertia with respect to mutually parallel axes

It specifies the distance between the axis through the center of gravity and the axis of rotation that is shifted parallel.

Steiner's theorem can be generalized for any two parallel axes of rotation. To do this, the sentence must be applied twice in a row: First, move the axis of rotation so that it goes through the center of gravity of the body, then to the desired destination.

The theorem about vertical axes deals with the special case of flat bodies with a uniform thickness, which can be neglected in comparison with other dimensions of the body. Then the sum of the moments of inertia around any two mutually perpendicular axes of rotation in the plane of the body is equal to the moment of inertia around the axis of rotation, which runs through its point of intersection and perpendicular to the plane of the body. For a body in the xy plane at in the picture that is:

Because then it is calculated

or in matrix notation

Rotation of the coordinate system 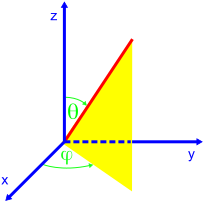 With the help of this rotation matrix , the inertia tensor can now be transformed into a coordinate system in which the z-axis points in the direction of the rotation axis:

The moment of inertia for the new z-axis is now simply the 3rd diagonal element of the tensor in the new representation. After performing the matrix multiplication and trigonometric transformations, the result is

As an example, we consider the inertia tensor of a rotationally symmetrical body. If one of the coordinate axes (here the z-axis) coincides with the symmetry axis, then this tensor is diagonal. The moments of inertia for rotation around the x-axis and the y-axis are equal ( ). The moment of inertia can be different for the z-axis ( ). The inertia tensor has the following form:

If one transforms this tensor as described above into a coordinate system that is rotated by the angle around the y-axis, one obtains: 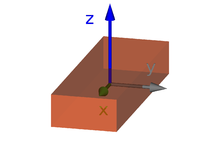 The main axes of inertia of the cuboid: x-axis the minimum and z-axis the maximum and perpendicular to it the resulting y-axis

If you look at a body of any shape that rotates around an axis through its center of mass , its moment of inertia varies depending on the position of this axis of rotation. There is - in general - an axis with respect to which the body's moment of inertia is maximally applied and one for which it is minimally applied. These two axes are always perpendicular to each other and together with a third axis, again perpendicular to the other two, form the main axes of inertia or, for short, the main axes of the body.

If, as in the picture, a Cartesian coordinate system is aligned in the center of mass parallel to the main system of inertia, the main moments of inertia are calculated as:

With Binet's moment of inertia (after Jacques Philippe Marie Binet )

the main moments of inertia can also be represented as:

The sum of two main moments of inertia is always greater than the third; they satisfy the triangle inequalities .

If the mass distribution is homogeneous, the main axes of inertia coincide with any existing axes of symmetry of the body.

In the event that all three main moments of inertia are identical, as was shown above, each axis of rotation through the center of mass is a main axis of inertia with the same moment of inertia. This applies to all regular bodies such as spheres , equilateral tetrahedra , cube , etc., see spherical top .

Moment of inertia to the clamped axis

be expressed. These formulas show the analogy to the corresponding formulas for momentum and kinetic energy of translational motion.

Moments of inertia of celestial bodies

Almost all larger bodies in space ( stars , planets ) are approximately spherical and rotate more or less quickly. The moment of inertia around the axis of rotation is always the greatest of the respective celestial body .

Example calculation: moment of inertia of the homogeneous solid sphere

Basic knowledge of integral calculus and coordinate transformation is helpful in understanding this section .

In order to calculate the moment of inertia of a massive homogeneous sphere with respect to an axis of rotation through the center of the sphere, the integral given in the "Calculation" section is used. For the sake of simplicity, the center of the sphere should lie at the origin of a Cartesian coordinate system and the axis of rotation should run along the axis. To the integral

and the functional determinants

Substituting in the expression for the moment of inertia yields

This shows the advantage of spherical coordinates: the integral limits do not depend on one another. The two integrations over r and can therefore be carried out elementarily. The remaining integral in

can through partial integration with

For the moment of inertia we finally get:

A rotary table is used to measure a body's moment of inertia. This consists of a circular disk, which can be rotated around its axis of symmetry, and a helical spring ( spiral spring ). They effected at a rotation of the disc a rear driving torque which is directly proportional to the deflection angle is . The constant of proportionality is called the directional moment or directional moment . Their value depends on the strength of the spring. The disk now has harmonic oscillations with the period of oscillation