Wayne James Hillman (born November 13, 1938 in Kirkland Lake , Ontario ; † November 24, 1990 in Cleveland , Ohio , USA ) was a Canadian ice hockey player who played 719 games for the Chicago Black during his playing career between 1955 and 1975 Hawks , New York Rangers , Minnesota North Stars and Philadelphia Flyers in the National Hockey League and 136 others for the Cleveland Crusaders in the World Hockey Association in the position of defender . Hillman celebrated his greatest career success in the service of the Chicago Black Hawks, with whom he won the Stanley Cup in 1961 . 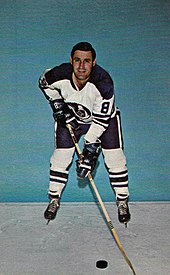 Hillman in the jersey of the Cleveland Crusaders

Hillman spent his junior years between 1955 and 1959 with the St. Catharines Teepees in the Ontario Hockey Association . There the defender developed over the course of the four seasons into a versatile player who knew how to convince on both the defensive and offensive. In total, he came to 228 missions within four years, in which he scored 115 points - 83 of them in his last two years alone. At the end of the 1957/58 season he was also elected to the OHA's First All-Star Team.

After the defender had already played for the Buffalo Bisons in one game in the American Hockey League in the seasons 1956/57 and 1958/59 , he was firmly in the team's squad at the beginning of the 1959/60 season . He spent two full playing years there before he was appointed to the squad of cooperation partner Chicago Black Hawks from the National Hockey League for the first time in the course of the Stanley Cup playoffs in 1961 and also made his debut there. At the end of the playoffs, the Canadian won the Stanley Cup with the Black Hawks . Hillman returned but despite the success for the following season back in the AHL. After sporadic missions for Chicago in the NHL, he was only able to establish himself in the team's regular squad for the 1962/63 season . After two full NHL game years, the defensive player was deported to the St. Louis Braves in the Central Professional Hockey League shortly after the start of the 1964/65 season . A little later he was given in February 1965 in a seven-player transfer deal to the New York Rangers . While the Rangers gave Camille Henry , Don Johns , Billy Taylor and Wally Chevrier to the Chicago Black Hawks, they received - in addition to Hillman - Doug Robinson and John Brenneman .

With the Rangers Hillman was henceforth again a regular player in the NHL and denied his two most successful years with 20 and 14 scorer points there. Overall, the Canadian stayed in New York for three years and only left the club in June 1968 via another transfer. With Danny Seguin and Joey Johnston , the Rangers gave him to the Minnesota North Stars in order to secure the services of Dave Balon . At the North Stars, where he was united with his brother Larry at the beginning of the season , the defender stayed only one season. In May 1969 he was transferred to the Philadelphia Flyers in exchange for John Miszuk . Once again the paths crossed there with his brother Larry, with whom he was part of the same team this time for a total of two years. While Larry Hillman had to leave the franchise in June 1971, Wayne Hillman stayed there for another two years.

Hillman's time in Philadelphia finally came to an end after the 1972–73 season when his contract expired and was not renewed. After his transfer rights had been transferred within the World Hockey Association competing with the NHL in exchange for Joe Hardy from the Chicago Cougars to the Cleveland Crusaders , the free agent joined the Crusaders before the 1973/74 season . The defender spent the last two years of his career there before retiring from active sport in the summer of 1975 at the age of 36.

Hillman died in November 1990 a few days after his 52nd birthday of complications from cancer in his adopted home Cleveland in the US state of Ohio .

Hillman's older brothers Floyd and Larry also made the leap into the professional field. While Floyd only completed six games for the Boston Bruins in the National Hockey League , Larry played over 1000 games in the National Hockey League and World Hockey Association . In addition, he won the Stanley Cup six times with three different teams and is also one of the few players who could win the Avco World Trophy and the Calder Cup in their career . At the age of 18, at the end of the Stanley Cup playoffs in 1955, he was given the honor of being the youngest player ever to be immortalized in the Stanley Cup - a record that is still valid today (at the end of the 2017/18 season). At the time of winning the title, he was 18 years, two months and nine days old. After the end of his career, Larry Hillman worked as a trainer in the WHA.

With Brian Savage , another family member made the leap into the NHL. The nephew of the three brothers played over 700 NHL games for four different teams between 1993 and 2006 and represented his home country Canada at the 1994 Winter Olympics in Lillehammer , Norway , where he won the silver medal.