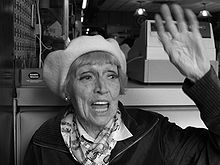 Anita O'Day (born October 18, 1919 in Chicago , Illinois , † November 23, 2006 in West Hollywood , California ; actually Anita Belle Colton ) was an American jazz singer . She was "one of the greatest swing singers of her generation" and possessed charisma and a talent for improvisation .

Anita O'Day started her career as a teenager, initially as a dancer in dance marathon competitions. She changed her name to O'Day because " it sounds like dough in Pig Latin , and that was what I wanted to do." This wish should at least temporarily come true.

In the mid-1930s she was engaged as a revue dancer in various Chicago clubs. In 1937 she married the drummer Don Carter , whom she had met at Club Vialago . Carter was instrumental in building her career, including teaching Anita O'Day in music theory . Although she could not sing vibrato - allegedly because of the missing uvula , which was cut off during an incorrectly performed tonsillectomy - she still decided to start a career as a singer.

In 1938 she had her first success as a singer in the newly founded jazz club Off-Beat , which became a popular meeting point for many outstanding jazz musicians on the Chicago scene. There she got to know the band leader and drummer Gene Krupa , who promised her an engagement in his band as soon as the contract with his band singer at the time, Irene Daye , expired.

In 1941 she joined Krupa's band and revolutionized the image of a band singer by insisting on wearing a band uniform instead of the usual frilly dress. A few weeks later, Krupa hired trumpeter Roy Eldridge . Anita O'Day's joint stage appearances with the colored Eldridge caused a sensation in racist America in the 1940s. Their duet "Let Me Off Uptown", which thematized the New York black district Harlem , became a million dollar sales hit and suddenly increased the awareness of Krupa's band. The music magazine Down Beat named Anita O'Day "New Star of the Year" in 1941.

In 1942 she married the golf professional Carl Hoff ; in the same year O'Day was voted fourth in the “Top Five” of big band singers by readers of the Down Beat. After Krupa was arrested for drug possession in 1943 and had to break up his band, she joined Woody Herman , but left his band after a short time and performed as a solo singer for the rest of the year.

In April 1944 O'Day switched to Stan Kenton's band , during their eleven months of engagement they made 21 recordings, including the well-known hit "And Her Tears Flowed Like Wine" , which reached number 4 and stayed in the charts for 18 weeks. In 1945 she joined again as a singer in the newly formed band of Gene Krupa, but her engagement lasted less than a year. Thereupon Anita O'Day devoted herself again to her solo career; She had her first successful title in the charts at the end of 1947 with "Hi Lo Trailus Boot Whip" (# 20). Her own drug problems first became public in 1947 when she and her husband were jailed for 90 days for possession of marijuana .

In the late 1940s, Anita O'Day teamed up with drummer John Poole , with whom she worked for the next 32 years until his death. She had another hit in 1951 with the "Tennessee Waltz" for the London label . Her album Anita was the first album that was recorded for producer Norman Granz and his label Verve Records ; it brought her career to a new high. In 1956 there was a reunion with Gene Krupa and Roy Eldridge ( Drummer Man ) in the Verve Studio . She also began performing at festivals and giving concerts with musicians such as Louis Armstrong , Dinah Washington , George Shearing and Thelonious Monk . The documentary Jazz on a Summer's Day (1960) about the Newport Jazz Festival from 1958 with parts of her appearance made her known worldwide.

During the 1960s she toured and made recordings with a spectrum of different musicians - from Billy May and Cal Tjader to Bill Evans and the quartet of Oscar Peterson to Jimmy Giuffre . Problems arose when she lost her contract with the Verve label in 1964 and failed to get out of the business sideline that many jazz musicians got caught up in by the enthusiasm of younger audiences for rock 'n' roll and beat .

Anita O'Day was, as she also suggested in her autobiography "High Times, Hard Times" (1981), addicted to heroin for a long time of her life . In 1968 - some sources say 1967 or 1969 - an overdose nearly cost her her life and her career seemed over. After successful withdrawal therapy, she made her comeback in 1970 at the Berlin Jazz Days . From the mid-1970s, many of her other records were made in Japan.

At the age of 85, Anita O'Day performed in small groups in clubs.

She died in sleep in a West Hollywood hospital on November 23, 2006 of complications from pneumonia .

Anita O'Day's singing art was based on swing , with elements of other styles such as cool jazz in her style. She described herself as a "song stylist". Her vibrato-free tone, which was specifically imitated by her successors in Kenton's band, Chris Connor and June Christy , she attributed to the absence of the uvula . Her style was characterized by a high level of imagination , humor and liveliness. The lyrics of the songs were very important to her, similar to Billie Holiday , in terms of rhythm and speed she could compare with Ella Fitzgerald .

Anita O'Day appeared extremely self-confident and extroverted, which was expressed, among other things, in her eye-catching and elegant clothing style. Her fondness for big hats on stage is legendary. Her dancing talent also contributed to her charismatic stage presence.