Augustin Krämer on a research trip to the Palau Islands in the western Pacific, 1909 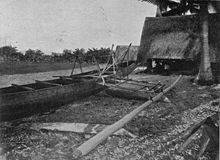 Book by Augustin Kraemer, Hawaii, Eastern Micronesia and Samoa, My second trip to the South Seas .

In 1849, Krämer's father emigrated to Chile, partly for political reasons, where he built a mill in San Miquel near Los Angeles . In 1867 the family returned to Germany and lived in Stuttgart-Berg . Augustin Krämer went to school at the Karls-Gymnasium in Cannstatt . He then studied medicine for a semester at the Eberhard Karls University in Tübingen , where he became a member of the Corps Rhenania , interrupted his studies for a year in voluntary military service, continued his studies for two semesters in Berlin , and then returned to Tübingen in 1886 PhD with a dissertation on nitrogen in urine in 1889. In 1889 he joined the medical corps of the Imperial Navy in Kiel , where he served until 1909 and rose to senior physician general .

From 1893 to 1895, Krämer traveled the South Seas as a ship's doctor on the SMS Bussard . He dealt with ethnology and zoological issues, in particular the construction of coral reefs and the distribution of plankton . On a second South Sea voyage, for which he was on leave from service from 1897 to 1899, he continued this research. In South America , Hawaii , Samoa and the Marschall and Gilbert Islands he put on ethnographic collections, of which he also donated individual items to the Museum of Ethnology at the University of Kiel . He published the results of his research in a two-volume work on the Samoan Islands. From 1899 to 1901 he traveled to the West Indies and the Mediterranean as a ship doctor on the SMS Stosch .

In 1906/07, Krämer took part as an anthropologist on the South Seas expedition of the survey ship SMS Planet . He then traveled to the Bismarck Archipelago and the Palau Islands with his wife Elisabeth Krämer-Bannow . In 1908, after the death of Emil Stephan , Augustin Krämer took over the management of the German naval expedition to Neumecklenburg . In 1909/10 he led the Hamburg South Sea Expedition to the Caroline Islands, coordinated by Georg Thilenius , on board the steamer Peiho . As a field research method he used participant observation early on.

After his return to Germany, Krämer moved from Berlin to Stuttgart in March 1911 and, supported by his wife, dealt with the scientific processing and publication of his research results.

From 1911 to 1915, Krämer was director of the Stuttgart Linden Museum . During the First World War he looked after reserve hospitals in Tübingen and Stuttgart. In 1919 he became a lecturer in ethnology at the University of Tübingen and began to set up an ethnological institute as a department of the Institute of Geography. In 1925 he was made an honorary doctorate from the Philosophical Faculty of Hamburg University. He set up his ethnological collections for his teaching activities in Hohentübingen Castle and then gave them to the university as a gift. Until his retirement in 1933, Krämer continued to expand the collection. Augustin Krämer was chairman of the German Society for Anthropology, Ethnology and Prehistory from 1911 to 1921 . He was buried on November 14, 1941 in the Uffkirchhof in Bad Cannstatt .

In 2010, the Etpison Museum and the Belau National Museum, with the support of the German Embassy, ​​launched the Krämer Translation Project in Palau, in which the five volumes on Palau, which are still important for the Palau judiciary in land and tribal disputes, have been translated into English.

In 1915, Krämer was elected a member of the Leopoldina . In 1938 the Württemberg Anthropological Association appointed him honorary chairman after retiring from 22 years of management.

A first complete list of his writings can be found in Dietrich Schleips Oceanic Ethnography and Colonial Practice , Tübingen 1989, pp. 176–186. This was supplemented and completed by Sven Mönters Dr. Augustin Krämer , Auckland 2010, pp. 236–253.