The Bentley Bentayga (internal name 4V) is a luxury SUV produced by the British automobile brand Bentley since 2016 . Like the second generation of the Audi Q7 , it is based on Volkswagen's MLBevo platform.

The “Bentley EXP 9F” study was shown at the 2012 Geneva Motor Show . The series version, which was presented for the first time at the IAA 2015 in Frankfurt am Main , shows significant differences, especially when it comes to the headlights. The Bentayga is Bentley's first SUV. In 2016, the Bentayga already had a share of around 47% of total Bentley vehicle production.

On the Paris Motor Show 2016 in Paris Bentley presented the Bentayga with the V8 Biturbo - diesel engine consisting of the Audi SQ7 is known. The Bentayga is the British automaker's first diesel-powered vehicle. The Bentayga Diesel came onto the market in February 2017.

In January 2018, Bentley presented the Bentayga with a V8 gasoline engine at the Detroit Motor Show .

At the 88th Geneva Motor Show in March 2018, Bentley also presented the Bentayga with a plug-in hybrid drive .

In autumn 2018, the diesel engine was no longer part of the model range for Europe.

In March 2019, the Bentayga Speed ​​was presented at the 89th Geneva Motor Show . With a top speed of 306 km / h, it replaces the Lamborghini Urus as the fastest mass-produced SUV in the world.

On June 30, 2020, Bentley presented a revised version of the Bentayga. No W12 version is to be offered in Europe in the future.

Final assembly of the Bentayga is carried out in Crewe , United Kingdom .

The Bentley Bentayga, together with the Audi Q7 4M on the same platform ( modular longitudinal construction kit ), is the first production vehicle with a combined 12 V and 48 V electrical system . The 48-V network has a maximum output of 13 kW; its lithium-ion battery has 10 Ah. It is charged from the 12 V network via a 3 kW DC / DC converter . The electric motors of the electronically controlled active roll stabilization and a switchable compressor for the engine charging are operated with 48 V.

The exact capacity of the battery has not yet been published for the plug-in hybrid model, but the manufacturer states that the vehicle can be charged in 7.5 hours in a household power supply and in 2.5 hours in a three-phase network . According to the NEDC, this should enable an electric range of 50 km.

There are four different drive variants for the vehicle. The gasoline engines are a 4.0-liter V8 engine with a maximum output of 404 kW (550 PS), which is also installed in the equally powerful Porsche Panamera Turbo , and a 6.0-liter W12 engine with the two power levels 447 kW or in the Bentayga Speed ​​with 467 kW. The plug-in hybrid drive variant has a system output of 330 kW. It combines a 3.0-liter V6 engine with an electric motor.

In all variants, the engine power is transmitted to all four wheels by an eight- speed automatic transmission.

The vehicle has a double wishbone axle at the front and a trapezoidal link axle at the rear .

The electromechanical roll stabilization (EAWS) from the supplier Schaeffler, which is available at an extra charge, consists of an electric motor with a three-stage planetary gearbox between the two halves of the stabilizer . The EAWS provides a stepless torque of up to 1200 Nm and requires up to 3 kW of power for this. On the one hand, when the road surface is uneven, the suspension comfort is increased by decoupling the stabilizer tubes, and on the other hand, roll compensation is achieved by actively turning the halves against each other during sporty cornering.

For the Pikes Peak International Hill Climb in June 2018, Bentley developed a special Bentayga. By doing without interior fittings, the vehicle weighs 300 kg less than the production version. The vehicle thus set the record for series SUVs on the mountain route. 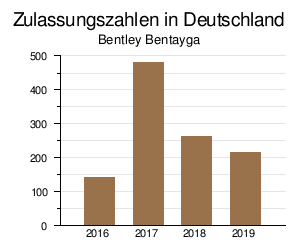