The German species name Blumenbinse is occasionally used as a common name for the swan flower ( Butomus umbellatus ). 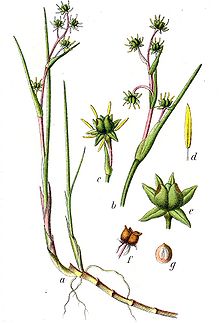 The leaves are basal and alternate , two, but almost three lines on the stem. The rush-like leaves are divided into leaf sheath and leaf blade. In the lower area, the stem is also surrounded by dead leaf sheaths . The open, 1.5 to 10 cm long leaf sheaths have 2 to 12 mm long, membranous auricles (ligules). The upright, simple leaf blades are parallel-veined, linear, semicircular, rutty, 2 to 41 cm long and 1 to 3 mm wide. The stomata are tetracycline. There are small pores at the tip of the leaf blade. There are many hair-like scales in the leaf axils.

In terminal, 3 to 10 cm long, racemose inflorescences three to twelve flowers and long, foliage -like bracts stand together. The inflorescence axis elongates after fertilization.

The star-shaped flowers are hermaphroditic and threefold. There are two circles, each with three white to yellow-green, free, uniformly shaped bloom cladding sheets; they are durable, membranous and 2 to 3 mm long. There are two circles with three free stamens each. The three-cell pollen grains have no aperture. The three or rarely six upper carpels are only fused at their base. Each carpel has marginally one to three anatropic ovules at its base . The usually three, rarely up to six pistils are 6 to 7 mm long and there is no stylus ; the papillary scars are seated. Pollination takes place by the wind ( anemophilia ).

Rushes of flowers with ripe (left) and deciduous (right) follicles 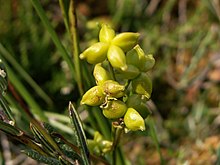 Follicles of the rush

One to four follicles are found in a collective fruit. Their light green to brown, 4 to 10 mm long, leathery, obliquely egg-shaped and strongly inflated follicles have a 0.5 to 1 mm long beak. Each follicle contains one or two, rarely three seeds.

The starch-rich seeds are egg-shaped, 4 to 5 mm long. The smooth and hard seed coat (testa) is brown to black in color.

The pollination of flowers is carried by the wind ( anemophily ). Flowering time is from May to June.

3 (-6) vesicular, 2-seeded follicles develop per flower . The starch-rich seeds contain no endosperm , but a green, straight embryo , the cotyledon (cotyledon) is not photosynthetically active. The seed coat is interspersed with large intercellular spaces, which enables the seeds to spread by swimming.

A typical ingredient is triglochinin , which belongs to the cyanogenic glycosides . There are calcium oxalate crystals present.

The flowering rush has a wide, circumpolar distribution area from the polar to the temperate climatic zones (south temperate to boreal) of the northern hemisphere , i.e. a Holarctic distribution. The distribution is sub-oceanic to sub-continental. The distribution centers of the species are concentrated in northeastern Europe and North America. In addition, some isolated occurrences in Central Europe and East Asia should be mentioned.

This species is restricted to acidic intermediate bogs and raised bogs ; it is considered a character species of the association Caricetum limosae (mud sedge society). The peat moss Schlammseggenried is a plant community which forms vibrating turf in oligotrophic waters that cannot be walked on . Above all, White Schnabelried ( Rhynchospora alba ), the mud sedge ( Carex limosa ) and the rare thread-rooted sedge ( Carex chordorrhiza ) together with the bladder rush make up this society.

This species is not endangered worldwide. Due to the destruction of their habitats (degradation, cultivation and drainage of bog sites), the rush is rarely found in Central Europe. It is classified as "highly endangered" on the German Red List . Only in the foothills of the Alps and in parts of north-east Germany is this species to be found more steadily, otherwise only isolated occurrences exist. In Lower Saxony the species is now only very scattered. In 2011 it could still be detected in six counties. Due to the wealth of moorland, it used to be common in the Emsland / Bentheim area, but has now become rare there too.

In the Allgäu Alps, it rises in Vorarlberg near Unterkrumbach near the Hochtannberg Pass up to 1570 m above sea level.