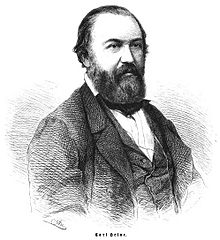 Ernst Carl Erdmann Heine (often Carl Heine and sometimes also Karl Heine , born January 10, 1819 in Leipzig , †  August 25,  1888 in Schleußig ) was a Saxon squire , lawyer , entrepreneur and liberal politician ( DFP ). He was a member of the Saxon state parliament and the Reichstag . As an industrial pioneer , he had today's Karl-Heine Canal built and shaped the face of Leipzig's inner west suburb and von Plagwitz .

Carl Heine was born in Leipzig in 1819 as the son of the native Brunswick merchant and later owner of the Neuscherbitz manor , Johann Carl Friedrich Heine (1771–1843), and his wife Christiana Dorothea, née Reichel (1781–1857). His grandfather was the Leipzig merchant Erdmann Traugott Reichel . Shortly after his birth Heine was in the Thomas Church baptized Lutheran. He studied from 1833 to 1837 at the Thomas School in Leipzig under the rectors Friedrich Wilhelm Ehrenfried Rost and Johann Gottfried Stallbaum .

He then studied law at the University of Leipzig , where he was a member of the student union Corps Saxonia Leipzig from 1838 . He was also interested in mathematical and economic relationships. In 1842 he acquired the Baccalaureus Juris.

In the year of his graduation, he entered the Leipzig municipal guard and achieved the rank of captain .

It was in 1843 with a dissertation (title: De principiis iuris in usu fluviorum adhibendis ) on the economic use of waterways and their shores according to Saxon state law to Dr. jur. PhD. He defended his work in front of Professor Gustav Ludwig Theodor Marezoll (1794–1873). Afterwards he settled in Leipzig as a lawyer .

In the same year on September 10th, he married Doris Trinius (1824-1858) in Leipzig, the daughter of the Leipzig businessman Bernhard Trinius. The couple had a son and two daughters. The daughter Eugenie married Heinrich Georg Schomburgk (1843–1928), who ran the Leipzig Westend construction company from 1902 to 1928. Heine's wife Doris died in 1858. In 1868 he married Friederike Bamberg (1839–1919), the daughter of a master shoemaker from Eckartsberga . In 1874 the couple moved into the newly built villa in Neuschleußig (Karl-Heine-Villa, Könneritzstraße 1), where Heine lived until his death.

Carl Heine had been a member of the Apollo Masonic Lodge in Leipzig since 1854 . Heine was friends with the Lindenau doctor and politician Ferdinand Goetz , who published a biography about him in 1897.

Dorotheenstrasse in Reichel's garden, around 1860

In 1842 his mother gave him a general power of attorney for Reichels Garten (formerly Apels Garten ). After the death of his grandfather Reichel, Carl Heine bought the shares of the other heirs in the property, had it parceled out and gradually built on from the middle of the 19th century. This is how the “colonnade district” of today's Inner Westvorstadt was created . He inherited the manor in Gundorf near Leipzig from his father, who died in 1843. From 1844 he began to drain and develop the boggy area along the Pleiße and built tenement houses here. In the following years he promoted the development, railroad development and sewerage plans in the Leipzig West area. In 1854, Heine extended his property to the community of Plagwitz .

The Heine's connecting canal between the Elster and the Saale. Entrance to Plagwitz. In the gazebo , 1856

In 1856 he began in Plagwitz with the construction of the first section of a canal connecting the White Elster with the Saale , which today bears his name ( Karl-Heine Canal ). With the excavation of the canal, what would later become the western suburb was drained. To transport the accumulating earth, he used wooden wagons moved by hand or with horses on light rail tracks with a gauge of 2 1/2 Saxon feet (798.5 mm). The remains of the railway are listed as a technical monument "Alte Lindenauer Kiesbahn" and are looked after by the Association Museumsfeldbahn Leipzig-Lindenau (MFLL) eV .

From 1853 he used the excess steam of a large laundry to obtain essential oils from fennel seeds, caraway, spearmint and other plants growing and cultivated near Leipzig. To implement further development and industrialization plans in Plagwitz, Carl Heine founded an "Öconomie" in 1858. In the following year 1859 Heine founded together with Otto Steche , brother of the art historian Richard Steche , under the name Heine & Co. a company for the “distillation of essential oils from native plants (...) as well as for the production of essences for the spirits and confectionery industry ". They specialized in the synthetic production of mustard oil . In 1875, the Heine & Co. company made the transition from empirical to targeted scientific work in their field. At the end of the year, she succeeded in taking the step towards the synthetic production of mustard oil. In the following years the range was expanded by turning to the distillation of drugs and woods from overseas. Here she made a major contribution to the scientific elucidation of the chemical composition of natural essential oils. This went right up to successful steps in the synthetic production of fragrances as the basis for perfume production.

In order to connect the western suburbs with the municipality of Plagwitz, Carl Heine had Plagwitzer Straße (today Käthe-Kollwitz-Straße) built in the south, parallel to the old country road from Leipzig to Lindenau , and, against the resistance of the Leipzig Council, the Plagwitzer Bridge, which made the connection to Leipziger Strasse in Plagwitz (today to Karl-Heine-Strasse ).

From 1873 onwards, Heine had 37 industrial connections laid in Plagwitz on the basis of a rail connection contract from the Prussian Zeitz train station and built three public charging points for companies without a rail connection. The connections and charging points were connected to the Zeitz train station with 15 industrial and connecting railways. In doing so, he created the prerequisites for the relocation of industrial companies which, thanks to the direct rail link, were able to calculate with lower transport costs and thus produce more cheaply.

In 1876, a development plan was approved in which the northern part of Schleußig ("Neuschleußig") , which previously belonged to Carl Heine and had previously consisted of meadows and fields, and the Schleußig manor district, which also belonged to Bernhard Hüffer and which was also largely undeveloped, provided for joint urban-like development with residential buildings was.

On May 24, 1888, Heine founded the Leipziger Westend-Baugesellschaft AG , into which he brought his property ( economy ) and which successfully continued his projects even after his death.

From 1870 until his death, Carl Heine was a member of the Second Chamber of the Saxon State Parliament . He ran from 1869 to 1881 in the 23rd rural constituency for the Progress Party until he lost to the Social Democrat August Bebel in 1881 . Then he stood for the Conservatives in the 3rd urban constituency, last in 1887 against Wilhelm Liebknecht . He dealt intensively with the social question , for which he was highly valued by Liebknecht. In 1878 he already rejected the socialist laws of the Reichstag. He was also a proponent of wealth tax .

In the second electoral period from 1874 to 1877 he was a member of the Reichstag for the German Progressive Party in the 13th Saxon constituency . Most of the members were artisans, merchants, landowners and manufacturers. Initially, the social democrat Johann Jacoby received a majority of the votes, but did not accept the election. In the renewed vote, Heine was able to prevail against the SPD opponent Wilhelm Bracke with the votes of the National Liberals and Conservatives . In 1874 he voted against the vaccination law . He also rejected the Reichsbank Act passed in 1875 for economic reasons. His candidacies in 1878 and 1884 were unsuccessful. He was also a member of the Leipzig city council.

Shortly before his death, he commented on his most formative influence:

"As a young man I sat at List's side and saw from this man the picture of the railway system that he had sketched over Germany [...] This is what my convictions are based on"

Under the management of Otto Steche, his sons and brother-in-law Thomas habenicht, the company Heine & Co. continued to develop successfully even after the turn of the century. In 1911 it was converted into a stock corporation and followed the path of a stable global company.

The Niemeyer sphere of the Kirow-Werke Leipzig, completion 2020

In 1897, the city of Leipzig honored Carl Heine with a memorial that was melted down in World War II but renewed in 2001. Several streets and a square were named after him (including Erdmannstrasse , 1891 Karl-Heine-Strasse , 1904 Karl-Heine-Platz ). In addition, the Karl-Heine Canal in Leipzig is named after him, which was originally a project by Heine.

In 2003 a Leipzig vocational school center was named Karl-Heine-Schule (formerly BSZ 3 for metal construction). It is located in the part of Merseburger Strasse that was named after him Heinestrasse from 1877 to 1893 .

The Karl Heine Prize has been awarded annually since 2018 . Significant industrial projects, in particular industrial culture, which bring the town to life are funded. In 2020 the award went to the entrepreneur and client Ludwig Koehne of Kirow-Werke for the implementation of Oscar Niemeyer's design , a concrete ball at Spinnereistraße 13 for use as a café and restaurant.