His Jewish parents came from Berlin, but were in Linz at the time of his birth. He studied at the law faculty of the University of Vienna . During his studies in 1935 in a Viennese coffee house, he wrote the hit Thank you, it was lovely in pencil in his notebook. The song (Electrola Austria; #EG 6754), recorded in 1937 with Harry's Tanzorchester ( Heinz Sandauer ) and singer Gloria Astor, was sung all over Vienna about two years later. He finished his studies in law and obtained a doctorate in law. jur. in 1937.

In 1938 he fled to France after the annexation of Austria . In a small boarding house in the Latin Quarter of Paris , he wrote rhymes, using the French newspaper Le Monde as a language aid. He made his living playing his ukulele in the cabarets of Montmartre . When the Germans occupied France in 1940, he was held in a camp for months, where he kept a detailed diary that is still available today.

He fled for the second time, with a visa to New York, where the multilingual Austrian work at Radio The Voice of America ( VOA got). He familiarized himself with the English language with the help of the new medium radio. The American entertainment shows were particularly useful when writing new lyrics for songs in the American language. During his free time, he introduced himself to music publishers. In New York he met his wife Mary Wulman, a child of Jewish parents who had emigrated from Poland in 1939.

Lee Lawrence - The Things I Didn't Do

At first, Fred Jay, as he now called himself, only composed songs sporadically, often together with Irving Reid. Lee Lawrence took over his apparently first composition The Things I Didn't Do (Decca # F10408) in Great Britain in November 1954. The original by What Am I Living For? was recorded by Chuck Willis on February 14, 1958, an often-covered song ( Carl Perkins , The Animals , Percy Sledge ), with number one in the US rhythm and blues charts and number 9 in the pop charts a first hit parade Placement. LaVern Baker recorded his I Cried A Tear on September 11, 1958 , Shirley Bassey followed with the B-side Hands Across The Sea (A-side As I Love You ; November 1958), Conway Twitty covered What Am I Living For? (B-side of The Hurt In My Heart , recorded February 21, 1960). Georgie Fame took over for his first single Bend A Little in July 1964, Julie Rogers brought his English lyrics to the Argentine composition The Wedding up to number 3 in the British charts in August 1964. The record had sold about 7 million copies by 1972.

In 1963 he received an offer for employment with Voice of America in Germany. His wife Mary was able to persuade him that at the age of almost 50 he and his family first moved to Munich, then to Berlin. Here he became program director of the station RIAS and introduced himself to producers and publishers with his black notebook. The young music publisher Peter Meisel saw potential in the lines written many years ago.

Mal Sondock - I only ever see you

Jay was a late starter as a pop composer , as he only developed a high productivity in pop compositions at the age of 55. For Udo Jürgens , it is evident that Fred Jay's first composition was written in Germany with the English-language title Stay in My World (B-side of Ol 'Man River ; 1965), followed in 1966 by the singing radio DJ Mal Sondock with the first German-language title Ich always see only you (B by Juanita Banana ). It was not until 1969 that several hits were made every year; that year there were 16 titles. Among them were Jay's first three German hit parade notes, all interpreted by Ricky Shayne : The world has never seen that (July 1969; 21st place), A beggar becomes a king (July 1969; 17th place) and I don't make compliments Chicago (November 1969; 24). 20 compositions are registered for 1970, including the first hit for Marianne Rosenberg in June 1970 , Mr. Paul McCartney (39th place). Rex Gildo brought Love a Little Bit (Melinda) to 25th place in March 1970, No Power on Earth to 37th place in August 1970. Howard Carpendale transported his I have found my happiness to 27th in December 1970 and took 7th alone Title in 1970 by Jay. The year 1971 saw 25 compositions by Jay, including the first meeting with Frank Farian , who as a solo artist covered the title Ruby Baby , provided by Jay with German text (as B-side of Mornings noon evenings - Barbara ) unsuccessfully.

Jay's first big hit came in April 1971 when Katja Ebstein came third at the Eurovision Song Contest in 1971 with the environmentally oriented title This World . Now the spell seemed broken, because Marianne Rosenberg brought the song Fremder Mann up to 8th place in June 1971. Christian Anders only reached 28th place with The Most Beautiful Girl That There Is in December 1971.

In 1972 Jay had a total of 44 titles produced. Together with Christian Anders, Jay wrote the ballad Es geht ein Zug nach Nirgendwo , which reached number one for 2 weeks from June 5, 1972. The second biggest hit for Anders with 800,000 records sold was only surpassed with 1.3 million singles by Geh 'nicht über (first hit from July 1969, # 2). Anders sang 17 songs by Fred Jay in 1972 alone. In July 1972, Jay and Jack White collaborated with Jürgen Marcus to create his first big hit, Eine neue Liebe is like a new life , which made it to second place. In February 1973 Jay wrote again with White for Jürgen Marcus his second-best placement A Festival of Love , which came up to 3rd place.

In 1973 Jay increased to 57 compositions, including 21 for Christian Anders. Nina & Mike brought Jay's Traveling Musicians to 5th place in December 1973, making it their biggest hit. At the end of 1973, he and Jack White wrote the song Sometime Everybody Comes to San Francisco together with Jack White. In February 1974 it was awarded a “ Golden Lion ”, but only made it to 17th place.

Jay came up with 58 tracks in 1974 when he wrote 8 tracks for Howard Carpendale. Among them was You Never Catch the Wind , which was able to penetrate to 8th place in September 1974. When Michael Holm presented the (originally Italian) title Tränen lie nicht in the “ZDF Star Parade” on September 19, 1974 , this boosted sales of the German cover version enormously and rewarded him with the top position in the hit parade. Jay wrote an English text entitled When A Child Is Born and had Holm record it. In the English version, it reached number 53 on the US Billboard charts in December 1974. The German version sold over a million copies and earned Holm a Golden Lion. 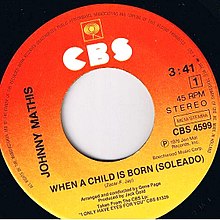 Johnny Mathis - When A Child Is Born

The year 1975 recorded 56 songs from the pen of Jay, of which only two titles could penetrate to 3rd place, namely the title A song published in March 1975, A song goes out into the world of Jürgen Marcus and Howard Carpendales Your footsteps in the sand . 1976 brought forth 77 compositions from the pen of Fred Jay, including the first two compositions for the disco formation Boney M. put together by producer Frank Farian , namely Got A Man on My Mind and Lovin 'Or Leavin' , both of which on the LP Take The Heat Off Me , released on June 28, 1976 .

More than two years after the publication of Tears Don't Lie and Jay's additional English text, Johnny Mathis picked up the English version When A Child Is Born again and sold 221,000 copies in one day in London in November 1976, which earned him an entry in the Guinness Book who set records . The Christmas carol reached first place in England for three weeks, within a few days 500,000 singles were sold there and a total of 850,000 shortly after the Christmas season. The 120 versions in different languages ​​brought the title to sales of 6 million records. It would remain Fred Jay's most successful publication. Since then, the title has been one of the million sellers among Christmas carols.

A total of 50 titles were released by Jay in 1977. This time three songs for Boney M., namely Silent Lover (LP Love For Sale , released May 2, 1977), Plantation Boy (B-side of the single Belfast , released September 19, 1977) and Jay's first hit for the troupe, Ma Baker , published May 2, 1977 . The song about an American gangster woman remained at the top of the German charts for three weeks from June 13, 1977. In April 1977, Howard Carpendale covered a British original next to Alice and was in the top 10 of the German charts that month together with the original version. In October 1977 Carpendale's version of Ti amo was published , which with Jay's German text could occupy second place.

Among the 42 compositions from 1978 there were 4 more hits for Boney M. Together with George Reyam and Farian, the single Rasputin was released on August 28, 1978 and made it to number 1 in the German charts for a week. Howard Carpendale transported ... then go to second place in the charts in September 1978. Bruce Low , specializing in songs with Christian content, presented The Legend of Babylon in September 1978 , which could penetrate to 7th place.

In 1979, 39 Fred Jay-authored tracks were released, including two big hits for Boney M. It was Hooray! Hooray! It's a Holi-Holiday , published March 26, 1979, and El Lute , August 1979, the latter received a gold record in Spain. The number of songs composed by Jay continued to decrease, as only 26 songs came out in 1980, including Boney M. I See a Boat on the River in April 1980 and Children of Paradise in September 1980 . In 1981 he created only 18 hits, of which Boonoonoonoos was taken over by Boney M. in September 1981. The group also covered his When A Child is Born for the LP Christmas album , released on November 23, 1981 . In 1982 only 7 titles came out of Jay's pen, with Boney M. taking over Zion's Daughter in November 1982 , which was based on Georg Friedrich Handel's oratorio Judas Maccabaeus . Fred Jay's last composition was Because we love each other for Andy Borg in May 1983, which reached rank 4.

Large buyers of Fred Jay's compositions were Howard Carpendale (87 titles), Christian Anders (52), Boney M. (36) and Jürgen Marcus (27). The humble Jay was entitled to a few gold records for his works, but he never received them. He wrote at least 900 songs, often specializing in German lyrics to international hits, making him one of the most successful hit songwriters in Germany. At BMI , only 174 titles are copyrighted for Fred Jay, including 3 BMI awards for I Cried A Tear , What Am I Living For and The Wedding .

Return to the USA

In 1985 he and his family moved back to New York, where his son Dr. Michael Jay works as a heart specialist. Fred Jay passed away at the age of 74. His farewell after his death in 1988 took place in Greenwich, Connecticut, in a small cemetery chapel with fewer than twenty relatives and friends. Fred Jay, who was already modest during his lifetime, was buried in a wooden coffin, no speeches were given, and the music played his first composition Thank you, it was enchanting .

His widow Mary Jay-Jacobson donated the Fred Jay Prize endowed with 15,000 euros , which has been awarded to German-speaking songwriters and artists since 1989 and is sponsored by GEMA . She attended many award ceremonies in person and passed away on March 28, 2010.