The Common ox tongue ( Anchusa officinalis ) is a plant from the genus of violets ( Anchusa ). It is also called the common ox tongue or simply ox tongue ; The trivial names Liebäugel or Blutwurz are less common . It is widespread in Europe and was occasionally used as a medicinal plant in the past .

The common ox tongue is a two year to perennial , herbaceous plant reached, the plant height of usually 30 to 70 (20 to 100) centimeters. It has a strong, up to 1.2 meters deep, held by black, wrinkled rings taproot . The stem axis is fresh green to bluish green and densely covered with little stiff, protruding hairs sitting on small nodules . The stem is usually simple and has sterile short shoots and branches of the inflorescence only in the upper leaf axils.

Of the alternate and spirally arranged leaves , only the lower ones are clearly stalked, the upper ones are sessile and more or less encompassing the stem. The leaf blades are lanceolate to almost linear and between 5 and 10 centimeters (the basal ones to over 20 centimeters) long and 1 to 2 centimeters (rarely from 0.5 centimeters, the basal ones to 3.5 centimeters) wide; they get smaller towards the top. The leaf tips are pointed briefly. The leaf margin is whole or more often a little wavy and more or less bulged or dented. The leaf blades are hairy evenly on both sides, the side nerves are indistinct. The leaves give the ox tongue its name. 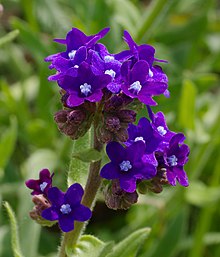 Detail of an inflorescence with flowers

Inner side of the crown with stamens and throat scales

The overall pyramid-shaped, often more branched, panicle-like overall inflorescence consists of short, but clearly stalked, leafy double coils , which are densely covered with many flowers and which are greatly elongated after flowering. The flowers are almost sessile.

The hermaphrodite flowers are five-fold with a double flower envelope. The five sepals are about 5 millimeters long at the time of flowering, about 7 millimeters long at the time of fruit ripening and split into lanceolate to linear, coarse hairy, continuously connected tips over the middle. The crown is 1 to 1.5 inches long and between 5 and 9 millimeters wide. The color of the petals is initially carmine and then turns dark blue-violet or is very rarely white. The five petals are fused into a wide, slightly narrower in the throat, the calyx slightly protruding corollary tube, which opens into triangular-egg-shaped, at the edge coarse papillary , white pharyngeal scales and almost circular lobes. Stamens and stylus are enclosed in the corolla tube.

The Klausen fruits disintegrate into four partial fruits. The light brown Klausen are 3 to 4 millimeters long, obliquely egg-shaped, bulging-wrinkled and finely warty. The elaiosome is a slightly protruding, ring-shaped pseudostrophiole .

The color change of the corolla from carmine red when blooming to a solid dark purple as a subtraction color in full bloom is explained by the fact that the epidermis has red cell sap , the underlying mesophyll blue.

There is differential grip or heterostyly . The throat of the corolla is tightly closed by the hollow scales which also serve as sap marks, preventing flies (Brachycera) and ants (Formicidae) from accessing the nectar. Real bees (Apidae), some butterflies (Lepidoptera) and Systoechus sulphureus , a wool floater (Bombyliidae), were regularly observed as visitors . If there is no insect pollination, self-pollination takes place.

The common ox tongue is a forage plant for the caterpillars of the owl butterflies, mugwort earth owl and yellow-spot forest shadow owl .

The common ox tongue is a widespread archaeophyte in eastern Central Europe , further in the west it is mostly inconsistent or feral from culture. In the Alps it rises to an altitude of 2309  m . Natural and archaeophytic occurrences include Eastern and Central Europe from Greece to the Ukraine to the Baltic States (to Ingermanland , Estonia, southern Finland, Åland , central Sweden, Denmark) and westward to the Elbe and Danube regions, northern Italy , including Turkey . As a partially naturalized neophyte , the common ox tongue occurs in western Central Europe, in France and in England, and occasionally as far as Scotland. Smaller neophytic settlements can be found in North and South America.

The common ox tongue can be found in grass heaths, on dry fields and roadsides, in hedges, fallow land, vineyards, sand dunes, on rubble, open pastures or river alluvions .

After Ellenberg is a light plant, a heat and Trockniszeiger, a pioneer plant warm valleys and a trim characteristic species requiring heat and drought yield forming two years to persistent Ruderalfluren (Onopordetalia acanthii).

From Anchusa officinalis , there are two subspecies:

The common ox tongue was previously grown as an ornamental plant , but also like borage (genus) ( Borago ) as a vegetable (young leaves as spinach or lettuce). In the past, parts of plants were also used for yellowing.

The common ox tongue was used as a medicinal plant. An extract is said to have a soothing effect and as an emetic . Nowadays its use for medicinal purposes is very rare because of the toxicity of the plant parts.

The herb is poisonous in high doses and was used (as early as around the year 1000 by the Tegernsee monastery , documented in the Versepos Ruodlieb ) as an unconscious or numbing fishing bait ("Buglossa mad bait"). Active substances are the toxic pyrrolizidine alkaloid lycopsamine and the non-toxic substances laburnine and acetyllaburnine . Pyrrolizidine alkaloids can also be carcinogenic if taken for a long time. Therefore, the common ox tongue should no longer be used for medicinal purposes.