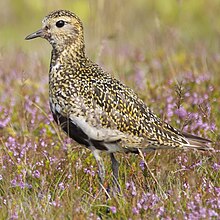 The golden plover ( Pluvialis apricaria ) is a bird art from the family of Plover (Charadriidae). It breeds on bogs, wet heaths and damp grassy areas. Its breeding area extends from Iceland through Great Britain and Fennoscandinavia to central Siberia. It extends to the edge of the arctic tundra. In Central Europe it is almost extinct as a breeding bird, the 2015 Red List of Germany's breeding birds lists it in Category 1 as critically endangered. A few breeding pairs are still found in the raised bogs of Lower Saxony.

The golden plover is around 26–29 cm long and weighs between 150 and 220 g. The wingspan is 67 to 76 cm. It is larger than the common ringed plover and the Siberian golden plover . It also differs from these two species in its white underwings and armpits as well as its legs, which are shorter in relation to body size, the less pronounced stripe above the eyes and the back, which is more spotted with gold in all clothes.

Golden plovers are rather clumsy-looking waders , have a round head and a gray-brown speckled top. The males are unmistakable in spring and during the breeding season by their black belly and black throat, which are framed by a white stripe. The females are also darker in color on the ventral side, but not as rich in contrast as the males. However, there is great variability in the black coloration, so that a distinction between the sexes is not always possible without any doubt.

The voice is a sad, monotonous "Truüüüt" that they utter at regular intervals. To conquer a breeding area , the males make conspicuous singing flights in spring.

Golden plovers eat insects , worms and snails that they look for on the ground. The golden plover's vegetable diet includes berries, grasses and seeds.

The prey is usually located visually and is usually picked from the ground. But it also pokes in the mud to a depth of an inch or two. Typical for golden plovers is a quick race to and fro while foraging for food. Rapid trampling of the feet can also occasionally be observed. Earthworms are grabbed with their beak and pulled out of the ground almost vertically.

Its main distribution area is northern Europe , in winter the birds migrate to the British Isles and the coasts in western and southern Europe , where they live on pastures and fields. In Germany they are mostly migrants .

The Wadden Sea of the North Sea is one of the most important resting places of this kind on their train. During the spring migration, up to 44,000 golden plovers can be found in the Danish Wadden Sea. Up to 43,000 birds were counted on the autumn migration in the Wadden Sea off the Schleswig-Holstein coast. Numerous golden plovers overwinter in the Dutch part of the Wadden Sea. Other important resting places in Germany are the fen area of Drömling that Fiener break , the Bay of Greifswald , Fehmarn , the Lewitz , the Oder and the Rheiderland . The birds rest in dense flocks and can often be seen together with lapwing .

Golden plovers live in wide moorlands, open mountain meadows, in heaths and in the tundra . Preferred habitats are open, clearly arranged rain moor areas with a maximum of five to six centimeters high lawn and dwarf shrub vegetation. The habitat should not have higher bushes and bushes. The golden plover generally avoids terrain in which he cannot move unhindered on foot and therefore prefers flat or slightly sloping ground. On bog areas that have been heavily modified by humans, the golden plover's habitat requirements are only met where the areas have been burned, pounded , pitted or grazed and then left to their own devices for a few years. Such areas then offer the golden plover habitable habitat for three to four years. He found this habitat mainly in the moor and heather regions of the county of Bentheim and the Emsland, where it was relatively numerous for a long time and where it found its last refuge in Germany. In winter the golden plover can also be seen in fields and open farmland, along the coast and in estuaries.

Golden plover chicks and eggs on a Faroese postage stamp . About 1000 pairs breed on these North Atlantic islands every year.

Both birds participate in the breeding business and take turns. The nest is a shallow hollow on the ground that is only slightly padded with plant material. It is mostly found in low heather or on bare ground. It is seldom built between scattered trees. The clutch consists of four eggs, which are laid 2 to 3 days apart. The eggs are usually 52 × 35 mm in size and are yellow-brown in color with a dark brown pattern. The drawing is often concentrated on or around the obtuse pole of the egg.

The chicks hatch after about 30 days and are immediately able to feed themselves, but are still supervised by their parents.

If an intruder approaches the nest, the golden plover performs a game of catch me. He tries to lure the intruder out of his territory by demonstratively stopping and running (see enticing ).

In Central Europe, Great Britain and Northern Europe, stocks have been falling drastically for a long time. As a rule, this is a consequence of the destruction of the moorland and, presumably, global warming. In the 19th century the species disappeared in Poland, Mecklenburg-Western Pomerania and Lichtenstein. Due to very intensive protective measures, the population in Germany has now stabilized at a very low level. For the year 2002 the number of breeding pairs in Germany was estimated at only twelve pairs. After the brood population in the county of Bentheim went out around 2005, the last population in Germany in the Esterweger can in northern Emsland could not be saved despite intensive protective measures. No broods were found there after 2012. Habitat is destroyed by amelioration , drainage and lowering of the groundwater level, as well as industrial peat extraction and the reforestation of moors.

The golden plover is one of the species listed in Appendix I of the Birds Directive . In the Federal Republic of Germany it is one of the strictly protected animals under the Federal Species Protection Ordinance and is also classified as a type of responsibility within the National Strategy for Biological Diversity of the Federal Government.

Bird of the year in Germany (from 2000 also Austria)