Grundsteinheim is a district of Lichtenau in North Rhine-Westphalia ( Germany ) and belongs to the Paderborn district . It is also part of the Bürener Land region .

The old postcode of Grundsteinheim is 4791.

View of the cornerstone home

Grundsteinheim is located on the Paderborn plateau in the southwest part of the Teutoburg Forest / Eggegebirge nature park north of the Lichtenau core town. It is located in the narrow valley bed or on the right steep slope of the middle Sauer , an Altenau tributary.

Like Ostwestfalen-Lippe, Grundsteinheim belongs to the oceanic climatic area of ​​northwest Germany , to which it owes its low temperature contrasts and mild winters. However, continental influences are already at work . The temperature in summer is higher and the nights are cooler than in closer proximity to the coast. The location on the edge of the Egge Mountains results in a colline climate of the hill country level with cooler temperatures and higher precipitation than in other locations in the district.

The origin of the Grundsteinheim can be seen as the "heim-Siedlung" (Steinheim) in the 8th / 9th centuries. Century. The first recorded mention comes from the year 1239 ( Stenhem ). On August 20, 2011, Grundsteinheim celebrated the 975th anniversary of the village (1036–2011).

Before 1 January 1975, the former community foundation home is part of the Office Lichtenau (Westfalen) in county Buren . With the entry into force of the Sauerland / Paderborn Act on this day, most of the municipalities of the Atteln Office will be merged with the municipalities of the Lichtenau Office and thus also the Grundsteinheim to form the new city of Lichtenau (Westphalia) and will join the Paderborn district.

The legal successor to the dissolved office of Lichtenau and the municipality of Grundsteinheim is the city of Lichtenau.

Old coat of arms from Grundsteinheim 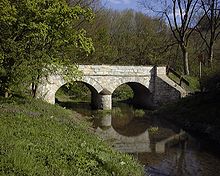