Portrait portraits of Leopold Gmelin and his wife on an oil painting by Jakob Schlesinger , created in 1820 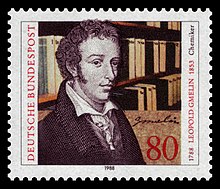 Leopold Gmelin (born August 2, 1788 in Göttingen , † April 13, 1853 in Heidelberg ) was a German chemist . Gmelin was a professor at Heidelberg University and worked, among other things, on potassium ferricyanide (red blood liquor salt, potassium hexacyanidoferrate (III)).

Gmelin was a son of the medic, botanist and chemist Johann Friedrich Gmelin and his wife Rosine Schott. Through his family he came into contact with medicine and the natural sciences at an early age, and in 1804 he attended his father's chemistry lectures. In the same year Gmelin went to Tübingen to work in the family pharmacy, he also studied at the University of Tübingen with Ferdinand Gottlieb von Gmelin (a cousin) and Carl Friedrich Kielmeyer (husband of a cousin). With the support of Kielmeyer, Gmelin moved to the University of Göttingen in 1805 and later became an assistant in Friedrich Stromeyer's laboratory there . In 1809 he successfully passed his exams at the latter.

Leopold Gmelin returned to Tübingen and once again heard lectures from Ferdinand Gottlieb von Gmelin and Carl Friedrich Kielmeyer . In February 1811 Gmelin got into a dispute with the medical student Gutike, after being insulted he challenged him to a duel, with a light outcome. Since student duels were forbidden, the incident was kept secret, but it came to light anyway. On March 10th Gmelin fled and went to see Joseph Franz von Jacquin at the University of Vienna . The focus of Gmelin's research was, among other things, the black pigment of ox and calf eyes , the result of this work was then also the subject of his dissertation . In 1812 Gmelin received his doctorate in absentia in Göttingen. Until 1813 he went on an extensive study trip to and through Italy. After his return he was given permission to work as a private lecturer at the University of Heidelberg from the winter semester of 1813/14; first he completed his habilitation in Göttingen . On September 26 of the following year he was appointed associate professor in Heidelberg.

In the fall of 1814 he traveled to Paris to study at the Sorbonne , he stayed until the spring of 1815. Together with his cousin Christian Gottlob Gmelin he made the acquaintance of René-Just Haüy , Joseph Louis Gay-Lussac , Louis Jacques Thénard and Louis-Nicolas Vauquelin .

In 1816 Gmelin married Luise, a daughter of the Kirchheim pastor Johann Conrad Maurer, in Kirchheim (near Heidelberg ); the lawyer Georg Ludwig von Maurer and the theologian Johann Friedrich Abegg became his brother-in-law. This marriage resulted in three daughters and a son, including Auguste, who later became the wife of the physician Theodor von Dusch .

When the chemist Martin Heinrich Klaproth died in Berlin in 1817 , Gmelin was supposed to be his successor. However, he refused and was appointed full professor of chemistry at Heidelberg University . Over time, a close collaboration with Friedrich Tiedemann developed there . The two published "Digestion after Experiments" in 1826 and thus laid the foundation for physiological chemistry . In the field of digestive chemistry, Gmelin later discovered several components of bile and introduced a bile pigment test named after him . When Friedrich Wöhler worked on complex cyan compounds in 1822, Gmelin assisted him and discovered the red blood liquor salt . In 1819 he was elected a corresponding member and in 1845 an external member of the Bavarian Academy of Sciences . In 1823 Gmelin was elected a member of the Leopoldina , in 1827 a corresponding member of the Prussian Academy of Sciences and 1830 a corresponding member of the Göttingen Academy of Sciences .

From 1833 to 1838 Gmelin owned a paper mill in Schriesheim , north of Heidelberg , and had taken it over in the hope of making a profit. However, the work in the mill was very time and money intensive and was at the expense of his academic work.

In 1817 Gmelin was able to publish the first volume of his handbook of chemistry . In 1843, the fourth edition of the work had grown to nine volumes. In this edition Gmelin took up the atomic theory and devoted much more space to the increasingly important organic chemistry. The terms esters and ketones were introduced by Gmelin. Until his death, Gmelin worked on the fifth edition of the manual, with which he also made an outstanding contribution to chemical documentation and information. In addition, he laid the foundation for the Gmelin system, later named after him, for the clear classification of inorganic substances.

At the age of 60, Gmelin suffered a first stroke , and another in August 1850. Both strokes struck his right half of the body, he was able to recover from the symptoms of paralysis, but remained weak. In the spring of 1851 Gmelin asked for his retirement, which he was granted. In the following two years he suffered more and more from the consequences of a brain disease, at the age of almost 65 Leopold Gmelin died on April 13, 1853 in Heidelberg, where he found his final resting place in the mountain cemetery. The grave complex is in Dept. E. His wife Luise and other relatives also rest here.

Leopold Gmelin dealt in his work with physiology , mineralogy and chemistry . His experimental work is shaped by Gmelin's very thorough and comprehensive way of working, and a certain writing talent is ascribed to him.

Gmelin's first physiological work was his dissertation on the black pigment of ox and calf eyes, the coloring principle of which he tried to fathom. Despite the simplest chemical means, he was able to describe the properties of the pigment aptly and correctly recognized the carbon as the cause of the color. Gmelin's most important physiological work is the digestion , published in 1826, based on experiments that he made together with Friedrich Tiedemann . The work, which also described many new working techniques, contained groundbreaking insights into gastric juice, in which they found hydrochloric acid , and bile, in which Gmelin and Tiedemann discovered cholesterol and taurine , among other things . The bile pigment test introduced by Gmelin made it possible to find bile components in the urine of jaundice addicts . In addition, Gmelin and Tiedemann provided a new, refined picture of the absorption of nutrients through the gastrointestinal tract, making them the founders of modern physiology.

Gmelin's mineralogical works are analyzes of various minerals , such as those of Haüyn , with whom he completed his habilitation in Göttingen, or of laumontite and cordierite . In addition, Gmelin also analyzed mineral waters and in 1825 published the work attempt of a new chemical mineral system , as he knew that the classification according to external or physical characteristics was inadequate. Leopold Gmelin's mineral system was largely received critically by experts, but the basic idea of ​​ordering according to chemical composition turned out to be useful.

Gmelin published the manual of theoretical chemistry , which appeared as Gmelin's manual of inorganic chemistry until 1997 in approx. 800 volumes, produced by the Gmelin Institute , and is continued by the Society of German Chemists with the Reaxys database . The manual, his most important work during his lifetime, was initially intended as a textbook, which was supposed to combine all of the chemical knowledge of the time. Due to the enormous increase in knowledge and the associated development of the manual into a reference work, Gmelin published a compact textbook on chemistry in 1844 . His chemical achievements also include the discovery of croconic acid ; he had thus synthesized the first cyclic organic compound and the aforementioned discovery of the red blood liquor salt.

In addition, he improved chemical apparatus and in 1843 (Handbuch der Inorganic Chemistry) also developed a forerunner of the periodic table as a further development of the triad system by Johann Wolfgang Döbereiner . The name triad for the Döbereiner system comes from him. He improved the triads of Döbereiner based on new values ​​of the atomic masses, which were not yet available to Döbereiner. He was able to arrange 55 elements in triads. However, it did not yet show any periodicity of chemical properties and the elements in the triads were not yet explicitly ordered according to increasing atomic mass. According to Scerri, who considered Gmelin's contribution to be greatly underestimated, this is reflected in the overall arrangement.