The Liebfrauenschule (LFS) is a private, state-recognized high school in Cologne-Lindenthal . The school is run by the Archdiocese of Cologne . 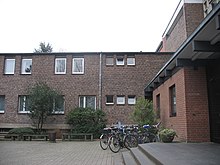 The school was founded in 1890 by Regina Köllen from Cologne as a higher private school for girls of Catholic denomination. At first it was not recognized as a lyceum .

In 1914 Regina Köllen handed the school over to the religious order of the Sisters of Notre Dame for reasons of age . In December 1915, the approval to take over the school was issued in the form of a ministerial decree of the Reich government in Berlin. The first school year under the leadership of the religious order was the school year 1916. 183 girls were taught under the headmistress, Sister Maria Valeria, and additional rooms had to be rented due to demand. In 1917 the school was recognized as a full lyceum, and the number of pupils had risen to 220. In 1918 around 400 students were taught.

In 1926, the pre-school classes corresponding to today's primary school were given up due to the new school rules, and 574 pupils were taught in the remaining school under the new school management of Sister Maria Alacoque. In 1927 the provisional approval was issued to expand the school into an upper lyceum with classes up to the Abitur, and the final approval was granted in the following year. A half-day boarding school was also opened. After the urgently needed new building, the 1928 school year began with 550 pupils in the new school building on Georgsplatz.

The Third Reich and the Post-War Years

In the course of the years 1936 to 1939 the problems between the nuns and the ruling National Socialists increased . In 1938 the previous headmistress, Sister Maria Alacoque, was replaced by Sister Johannita, after the upper classes had to be dismantled up to the Abitur after a decree of 1936. In 1939 the school had to be handed over to the city and the Empress Augusta School moved into the school building . In January the school building was forcibly sold to the city. The school was completely destroyed in the last bomb attack on Cologne on March 2, 1945.

Due to strong efforts to rebuild the school, the city made the building of a former Jewish children's home on Aachener Straße available in 1947. At Easter 1947 the school was reopened with two sixths under the direction of Sister Maria Theresia . In 1950, the school received approval to run double-track as a grammar school and a women's high school from the eighth grade onwards. In 1951, due to the increasing number of schoolchildren, new land was acquired for a new building, which was inaugurated on Brucknerstrasse in October 1953. It was the first private school building in North Rhine-Westphalia after the war, and its shape became a model for many new school buildings.

In 1983 boys were admitted for the first time in the 5th school year, in 1989 the Archdiocese of Cologne took over the sponsorship of the school. In 1993 the last nun who had still taught at the school retired. Anne Rapp became the new headmistress. In 1996 another large extension took place.

In 2003 Ingrid Schulten-Willius took over the management of the school. The number of students at the beginning of the 2009/2010 school year was 1183; there were 29 classes, 868 students in lower secondary and 315 in upper secondary and 79 teachers. In addition, since the 07/08 school year there has been midday care for students who take their Abitur within twelve years and have afternoon classes several times a week.

In March 2009 the Liebfrauenschule received the “Individual Support” seal of approval from the state of North Rhine-Westphalia. There is special skills training in grades 5 and 6. Working methods and social skills are strengthened here. In the higher grades there are highly individualized support modules that are intended to provide support in the case of learning difficulties in the core subjects. Many talent development courses, such as in the field of robotics, foreign languages ​​or first aid, are also offered.

Since the 2011/2012 school year, the Liebfrauenschule has been building up from grade 5 to all-day school. A new school canteen is currently under construction on Clarenbachstrasse, which will also be used as a multi-purpose hall. The neighboring cathedral singing school and the music school of the Cologne cathedral choir should also be allowed to use the premises. Until now, only the entrance hall or one of the sports halls could be used for events at the Liebfrauenschule. The building is expected to be completed in 2020.

Achim Strohmeier, history and Latin teacher, took over the post of headmaster at the Liebfrauenschule from January 2020.

Schools of the Archdiocese of Cologne