Coat of arms of the red tanners in the Viennese industrial cooperatives, around 1900

The job title of tanner or red tanner is derived from the largely lost craft of tanning , a specialized form of tannery that processed cattle hides into hard-wearing, strong leathers, for example for shoe soles , boots , saddles or satchels. Tanned leather is hardly elastic, but when tanning it gains in thickness at the expense of the surface and becomes very resistant to water and weak acids.

Since leather tanned with oak tanned is red to brown, the tanners were often referred to as red tanners . There are numerous regionally different names for the profession of tanner: Lauer, Löber, Loher, Löher, Lorer, Löhrer (ndrhein.), Löhr (northern German) - as job titles they have long been forgotten, but have survived to this day as family names.

The craft of tannery

After the tanner or red tanner had removed the remains of meat and fats on the scraping tree from the bellows , the so-called liming with lime took place in the liming pit, whereby the hairs detached from the bellows and could be removed in a second scraping process. Then the so-called green (unripe) hides together with a tan made of oak or spruce bark and gall apples (also called knobs) were brought into a tanning pit for tanning. The classic tanning in loh pits could take between half a year and three years, depending on the raw material and the desired quality, whereby the hides had to be shifted every two to four months. In this respect, a tanner had to have as many pits as possible for continuous work.

Replica of a drying rack for Lohrinde in Hinterhermsdorf (Saxon Switzerland)

As Gerberlohe refers to the separate, cut up the tree and finely ground bark mostly - oak bark , rarely also spruce - or pine bark - in which the tannin is tannin is. Four to five hundredweight of tan are required for one hundredweight of leather, and eight hundredweight for strong sole leather (also called pound leather ). In this respect, a rich stock of wood was necessary for the craft of tannery. The tanner from the profession of were supplied Löher , mostly in May, when the sap rises in the trees, the bark often in purpose-built oak forests peeling , even Lohwald or Lohhecke , peeled called before they were felled. The best tan is said to be obtained from the bark of eighteen-year-old oaks. Since the end of the 19th century, the local oak tree has been increasingly replaced by tannins such as quebracho wood imported from overseas.

Since large amounts of water were generally required for the tannery, tanneries were usually located on a river, stream or canal, because the hides had to be rinsed and watered for many hours not only in preparation for tanning, but also after being removed from the tannery . The chemical tanning process was completed by the subsequent drying of the tensioned hides in the air. The last work steps were rolling, smoothing, possibly splitting ( split leather ), as well as waxing and trimming the leather.

History of the tannery 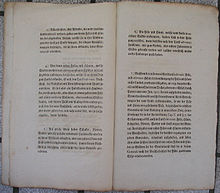 Tax edict of Friedrich August of Saxony for skins, 1801

In 1284 the Berlin tanners receive their guild letter , in Frankfurt am Main the oldest guild rules for tanners date back to 1355.

While the bark initially had to be crushed by hand, this was done with the advent of the use of water power from the 12th century in a mill, usually driven by a water wheel, the so-called tannery, which usually belonged to the tannery.

Due to the extremely strong odor, the tanner like the other tanners were being built in the Middle Ages city ordinances in many places obliged to settle in the suburbs or in the suburbs, namely in the processes of the rivers, as the flushed when washing the leather mineral substances such as alum , Arsenic , lime and salt as well as meat and hair residues led to enormous pollution of the waters.

Like all tanners, the tanners were also exposed to high health risks: "Of course, Madame Gaillard knew that Grenouille had no chance of survival in Grimal's tanning workshop as far as humanly possible" - so the description in Patrick Süskind's novel " The Perfume ", in which he vividly explained the heavy and unhealthy work of the tanners in Paris in the 18th century. Wetness and cold water led to chronic rheumatic ailments , the lime used for grayling burned the hands and the handling of the raw hides often led to fatal anthrax infections .

With the advent of industrialization in the 19th century, the lengthy process of pit tanning was replaced by rapid or barrel tanning with tan broth, and later chrome tanning in vats: the traditional profession of tanner was replaced by the industrial leather worker.

Bouillon cup from around 1832, on the front a gold-framed scene “The mourning tanners” based on a painting by Adolph Schroedter

Relics of the ancient craft

Like all tanners, the tanners also had a high demand for water, so that they mostly had their workshops on watercourses. Since the water was heavily polluted by washing the leather, many medieval town ordinances ordered their settlement on the lower reaches of the rivers. Street names in the old city centers still refer to these tanneries' locations:

The tanners' house in Quedlinburg in Saxony-Anhalt , the former guild house of the Quedlinburg tanners, testifies to the prosperity of this guild to this day.

Technical monument to the tannery in Weida

From the middle of the 19th century, Weida developed into a focus of leather production in Central Germany . The museum is the former Francke tannery , which worked from 1844 to 1990. After production was discontinued, the company was transformed into a technical monument with fully functional machines, such as a bark crusher, a tinder mill, a meat removal machine, a leather roller, an ejector machine, a roller press, pumps, tanning pits and rotating wooden barrels, as well as a small steam engine from 1855 with 12 hp. In the adjacent former house there are exhibition rooms on the history of the craft.

In a tanner's house built around 1750 in Dippoldiswalde there is a display facility. The three-storey tannery workshop with tannery, dressing room, drying floor, leather store and journeyman's chamber, which has been faithfully reconstructed, also includes the baroque house of the tanner master and his family. In addition to the 22 exhibition rooms, some of which offer space for temporary exhibitions - e.g. B. about industrial leather production in the 19th and 20th centuries. Century - there is a lecture room and a video cabinet on the subject of "leather".