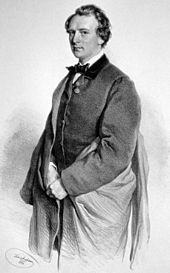 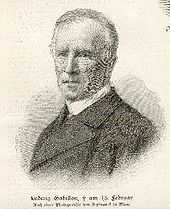 Ludwig Gabillon came from a Huguenot family who immigrated to Mecklenburg . His father was the Catholic tax secretary (Johann Otto) Ludwig Gabillon (1784–1847), his mother the housewife Dorothea Hentze or Uentze. As a high school student, he saw the opera Die Stumme von Portici performed by Karl Friedrich Bethmann's theater company in Güstrow . He was enthusiastic and with the permission of his parents he joined the Bethmann ensemble and was able to successfully debut as an "Indian" as early as Easter 1844.

When his contract ended in 1846, Gabillon went to Oldenburg (Oldenburg) to see Julius Mosen , the artistic director of the grand ducal court theater . He engaged him until the end of June 1848 and with effect from July 1st he moved to Schwerin , at the court theater there . In Schwerin he married the actress Jeanette von Zahlhaas on June 11, 1847 ; this marriage, from which a son emerged, was divorced in 1852 or 1854.

The next station was the Hoftheater Kassel , where he was a member of the ensemble until spring 1851. He was then engaged at the Hanover Opera House until the spring of 1853 . At that time he met Heinrich Laube , who signed him to the Burgtheater in Vienna .

In the summer of 1853 Gabillon completed a sensational guest appearance at Her Majesty's Theater (St. James Theater) in ( London ) together with Ludwig Dessoir , Gustav Emil Devrient and Lina Fuhr . The critics overturned and the Times' feature pages read:

"When the mind has arranged these beautiful means into an artistic whole, and it is stepped out of the green state of its happy beginners, Gabillon will make his fortune at every theater and his name will soon be able to shine in the ranks of the first artists."

On October 10, 1853, Gabillon said goodbye as "Carl Moor" and on December 3 of the same year he was seen for the first time in Vienna as "Sun King". Gabillon married his colleague Zerline Würzburg - also from Güstrow - on June 27, 1856 in Vienna . The couple had two daughters: Dora (* 1850) and 1857 Helene (* 1857). Dora married the historian August Fournier , Helene the literary scholar and writer Anton Bettelheim . Helene Bettelheim-Gabillon worked as a writer and graphic designer. Dorothea's daughter Christine Olden , his granddaughter, was a well-known psycho and child analyst.

In February 1863 he played “Hagen” in the world premiere of Hebbel's Nibelungs . Both the audience and the official theater review were enthusiastic; Hebbel himself described Gabillon's appearance as a personified thunderstorm ("... everything he spoke ignited, every word hit ..."). Between 1875 and 1895 Gabillon also worked as a director at the Burgtheater.

Over time, the couple Ludwig and Zerline Gabillon became the most famous actors of their time. With a repertoire of around 300 roles, Ludwig Gabillon was the most famous character actor; one of his most famous roles was the imposing depiction of Hagen in Hebbel's Die Nibelungen . For the hero roles embodied by Gabillon, the term so-called gabillon roles was coined in theater studies .

In January 1895 Gabillon was still seen as "Giacomo Neri". When he returned to Vienna from his subsequent summer vacation at the end of August 1895, he took on the role of the “earth spirit”. He suffered a stroke during the rehearsals . Gabilloan died in Vienna at the age of seventy and found his final resting place in the evangelical cemetery in Vienna-Matzleinsdorf (crypt center above, number 034).

“... a man who doesn't walk, but walks. A voice that doesn't speak, but resounds. An eye that doesn't look, but flashes. A lip that doesn't slurp, but empties. A heart that doesn't feel, but glows. a hand that does not grasp, but ties. an arm swinging the spit, a spike that strikes. An actor on a grand scale, a person in a fresco style: that was Ludwig Gabillon ... "