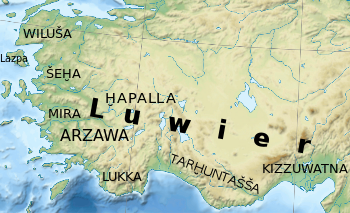 Possible spread of the Luwians during the late Bronze Age

Luwier is the modern scientific name of a population group that lived in Asia Minor and Northern Syria in the Bronze Age and Iron Age , which means speakers of the Luwian language . Epigraphic evidence in Luwian hieroglyphic script as well as place and person names that can be determined as Luwian serve as possible indicators of the Luwian area. Whether there ever was an ethnic group that identified itself through the Luwian language is a matter of dispute.

The common name has recently become particularly popular thanks to Eberhard Zangger , who put forward the thesis that Luwians lived in western Anatolia and triggered the Trojan War. This thesis is hardly supported by science.

This section needs to be revised. Details should be given on the talk page. Please help to improve it , and then remove this flag.

One can only speculate about the origin of the Luwians. Research proposals still vary considerably today. So this depends on the assumed localization of the Urindo-European speaking population, which later appears in Anatolia; the Balkans are proposed , but also the area of ​​the lower Volga . Nor can it be determined whether immigration took place along the west or east coast of the Black Sea . The possibility of several waves of immigration is also being considered. It is also controversial whether the separation of the Luwians from the Hittites and Palais only took place in Anatolia.

The Demircihüyük culture (approx. 3500-2500 BC) can possibly be attributed to the Indo-European immigrants, which would fit in with linguistic-historical considerations, according to which Uranatolian is at the latest by 3000 BC. Must have separated.

Certainty exists from around 2000 BC. Chr .: Personal names and loan words in the vocabulary of the ancient Assyrian documents from Kültepe , which were published between 1950 and 1700 BC. Chr. ( Middle chronology ) show that at that time Hittite and Luwian were already two different languages. According to many researchers, the Hittites settled at the upper Kızılırmak , with the political-economic center around Kaniš-Neša , after which the Hittites used their language nešili a . called. The Luwians are plausibly localized in southern and western Anatolia, with the possible political center in Purušḫanda . The Assyrian traders who lived in Anatolia at the time called the local population indiscriminately nuwaʿum , which can be traced back to the Luwian name, the initial change of l / n being due to Hurrian mediation.

The Old Ethite laws from the 17th century BC Chr. Also deal with cases that concern the then independent countries Palā and Luwiya. These related to traders and people abducted to another country and appear to be based on agreements between and Luwiya. It should be noted that the Luwians probably did not create a "Luwian" state. In the course of time, however, Arzawa formed in the west , with the core area in the valley of Maiandros . In the south was the state of Kizzuwatna , which consisted of a mixed Hurrian-Luwian population. The state of Tarḫuntašša was only created in southern Anatolia during the Hittite Empire . Whether the country Wiluša-Tarwiša , which is localized by the prevailing opinion in the Troad , but which is uncertain and controversial (see article Wiluša ) and around 1280 BC BC became a vassal of the Hittite Empire, belonged to the Luwian states, cannot be decided on the basis of the testimonies. In research it is discussed whether Luwish or an early form of Lydian was spoken in the Troas .

Arzawa is already mentioned in the ancient times, but at that time it was outside the interest of the great Hittite kings. The first armed conflicts occurred under King Tudḫaliya I or Tudḫaliya II. Among other things, incursions of the Pontic Kaškäer and Hajaša - Azzi into the Hittite empire led to its weakening and at the same time to the strengthening of Arzawa, whose king Tar vonuntaradu by Pharaoh Amenophis III. was asked to give him a daughter as a wife. The Hittite great king Muršili II finally smashed the Arzawareich after several campaigns that had already started under his father Šuppiluliuma I. Before the fall of the main town Apaša (probably Ephesus ), the last Arzawian ruler Uḫḫaziti fled to an Aegean island , where he died soon afterwards. Arzawa was then divided into vassal states by the Hittites: Mira -Kuwalija (probably the former heartland of Arzawa), Šeḣa and Ḫapalla .

Šeḫa was probably roughly congruent with the ancient landscape of Lydia . It is first mentioned in the early 14th century, when the Hittite king Tudḫaliya I defeated a coalition of Aššuwa states, which Wiluša also belonged to. After the subjugation of Arzawa by Mursili II in the late 14th century BC. In BC, Šeḫa was created as a vassal state of the Hittite Empire, which was ruled by a king who was subordinate to the Hittite great king. In the 13th century BC In BC, Šeḫa had to endure attacks by the presumably Arzawan rebel Piyamaradu , who, according to a letter from Manapa-Tarḫunta ( CTH 191 ), apparently occupied Šeḫa temporarily and attacked the nearby island of Lazpa .

Kizzuwatna is the Hittite-Luwian name of ancient Cilicia . The area was founded in the 16th century BC. Subjugated by the Hittites. Around 1500 BC The country was detached and formed the kingdom of Kizzuwatna, whose rulers, like the Hittite rulers, bore the title of "Great King". The Hittite great king Telipinu was forced to conclude a treaty with great king Išputaḫšu, which was renewed by the successors. Under King Pilliya, Kizzuwatna lost his sovereignty and became a vassal of Mitanni . Around 1420 BC King Šunaššura broke away from Mitanni and made a covenant with the Hittite king Tudḫaliya I , but soon afterwards the country seems to have been incorporated into the Hittite empire and has since been an integral part of the empire until its fall around 1190 BC. Chr.

After the collapse of the Hittite empire around 1190/80 BC. Several Neo-Hittite states were formed in northern Syria and south-eastern Anatolia , whose rulers sometimes called themselves great kings, i.e. viewed themselves as legitimate successors of the Hittite rulers, or small principalities. This is how Tabal emerged in south-eastern Central Anatolia , Kawa-Que in Cilicia , Gurgum in northern Syria , Melid , Kummuh , Karkamis on the Euphrates and east of the Masuwara River and Unqi-Patina and Hamath on the Orontes . The princes and z. Some traders from these states used the hieroglyphic Luwian for their inscriptions, which lasted until the 8th century BC. To date. The bilingualism of Prince Azatiwada in Cilicia is of particular importance .