Memorial plaque at the Schadow High School in Berlin-Zehlendorf 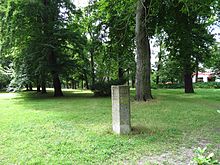 From 1906 (according to other sources as early as 1902) to 1922, Mebes worked for the civil servants housing association zu Berlin eGmbH , and from 1909 to 1919 he was part of its structural engineering board member .

Since 1903 Mebes was married to Gertrud Dora Julie Hedwig Sophie Emmerich, a daughter of the architect Julius Emmerich . From 1911, he and his brother-in-law Paul Emmerich ran the architectural office Mebes und Emmerich , which was mainly devoted to housing developments. Designs for other buildings, including schools and administration buildings, also come from this office.

On November 19, 1920, the Technical University of Braunschweig awarded him an honorary doctorate (Dr.-Ing. E. h.) At the suggestion of the Department of Architecture . Even after leaving the civil servants' housing association, he shaped Berlin through the planning and construction of significant large estates for non-profit housing associations such as the Heidehof housing estate in Zehlendorf, the Friedrich Ebert housing estate in Wedding, the Spree housing estate in Oberschöneweide and the Rauchlose Stadt housing estate in Steglitz. Mebes' success was not only due to his skills as an architect, but also as an organizer, who was also able to complete large building projects - often together with other architects - to the satisfaction of the client and everyone involved.

In 1931 Mebes became a member of the Prussian Academy of the Arts , after the Nazis came to power he was expelled on May 15, 1933. Mebes reacted to the seizure of power with his withdrawal from public office and a major downsizing of his architecture office.

Paul Mebes died in Berlin in 1938 at the age of 66. His grave is in the Zehlendorf cemetery . By resolution of the Berlin Senate , the last resting place of Paul Mebes (field 22 U 400) has been dedicated as an honorary grave of the State of Berlin since 1978 . The dedication was extended in 1999 for the usual period of twenty years.

The "Paul-Mebes-Park" on the corner of Potsdamer Strasse and Fischer-Dieskau-Weg in Berlin-Zehlendorf was named in his honor.

Mebes' designs attracted a lot of attention in European housing and urban development at the beginning of the 20th century. He was one of the pioneers of open housing developments before the First World War . He vehemently rejected the block perimeter development with rear buildings that had prevailed until then . His designs for apartment buildings for the civil servants' housing association in Berlin and the Krochsiedlung in Leipzig were particularly striking .

The early phase was marked by efforts to get away from the traditional Berlin architecture of historicism , i.e. from overloaded stucco facades, exuberant splendor and indiscriminate eclecticism . Mebes tried to achieve “modesty, objectivity and beauty” in his buildings. In doing so, he made use of traditional styles: He was particularly oriented towards the architecture of the 18th century. Classicist details can be found particularly frequently ; forms of North German or Dutch (simple) Baroque also appear; even early Gothic forms can be found. In the design of larger residential complexes, he turned away from traditional block development - the extreme forms of which were criticized with the term "tenement barracks" - and dissolved the closed structures with private streets and gardens. Before the First World War, he became one of the most important architects of bourgeois apartment building.

In the expressive phase, residential buildings with expressionistic , but sparingly used elements, such as strong color contrasts (alternating brick and plaster surfaces), pointed staircases ("crystalline" in the sense of Expressionism), windows with "triangular" angled lintels and Maschikulis partly borrowed from the castle architecture .

From the second half of the 1920s, buildings were built that are influenced by the architecture of the Neue Bauens and have a clear sobriety. Mebes, who had made the demands of New Objectivity even before its emergence as a style, was now less a pioneer than a representative of the style. At Mebes, too, a uniform style developed from around 1924. He attached less importance to the details than before, but the systems still look aesthetically closed. He continues to work with color effects (plastered surfaces / brick masonry) to e.g. B. to highlight stairwells and ribbon windows. Well-considered apartment floor plans, brightness and good ventilation of the apartments characterize these buildings.