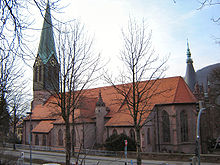 The Peterskirche is the oldest church in Heidelberg's old town. Since the late Middle Ages they often served as the university chapel of the University of Heidelberg . It has been a university church since 1896. 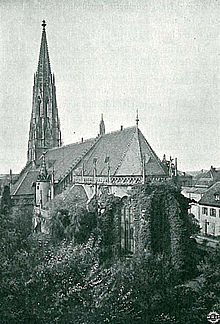 Peterskirche with its original neo-Gothic tower, photograph from 1896

The Peterskirche was built in the 12th century. It is therefore even older than Heidelberg itself. It was first documented in 1196. The Peterskirche was donated by the diocese of Worms when the area on which Heidelberg is located was still in their possession. The name of the church already indicates its connection with the Worms Cathedral , which is under the patronage of St. Peter . In 1225 the area was given to the Count Palatine as a fief and Heidelberg was founded.

Since 1400, the St. Peter's Church in Heidelberg, together with the parishes of St. Laurentius in Altdorf near Nuremberg and St. Jakob in Lauda, belonged to the three own parishes of the University of Heidelberg, which had been withdrawn from the responsible diocesan bishops and were directly subordinate to the Pope. The Holy See entrusted the administration of these parishes to the Neustadt monastery dean Heilmann von Wattenheim († 1411), who thus rose to the rank of papal archdeacon . The university patronage over the three churches remained until the introduction of the Reformation, then the church became Protestant. After Heidelberg was taken by Elector Maximilian I of Bavaria , the Dominican Johann Andreas Coppenstein († 1638) officiated here between 1624 and 1630 as a Catholic pastor. He was a well-known theological writer and was supposed to reorganize Catholicism there. 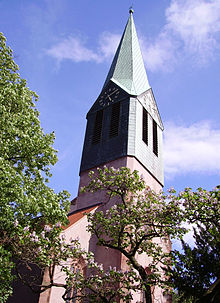 Church tower of the Peterskirche

Numerous professors were buried in the church, including Marsilius von Inghen , the founding rector of Heidelberg University . His grave is no longer preserved today, but in 2011 a plaque for Marsilius was placed in the university chapel on the side to mark the 625th anniversary of the university . On the inside and outside walls of the church there are a total of around 150 epitaphs from university professors and electoral courtiers. A plaque of honor in the south side chapel commemorates the poet and humanist Olympia Fulvia Morata . The partially preserved churchyard was the main cemetery for the castle district and the city , located outside the city wall . On the southeastern outside is the university's memorial plaque for the victims of war and tyranny. The gravestone of the Swiss textile entrepreneur Hans Jacob Rieter , who was beaten to death in a robbery by the Hölzerlips band in 1811, is also preserved there .

In addition to numerous concerts, the Protestant university services are celebrated here on Sundays and public holidays . Liturgy and preaching service are carried out by the members of the Heidelberg Theological Faculty and the pastors of the Evangelical Student Congregation (ESG) Heidelberg. The responsibility for the university services, the members of the preacher Convention, which all ordained members of the Theological Faculty, selected university preacher in cooperation with the members elected by the community chapter (parish council). The Peterskirche is also the venue for panel discussions ("Peterskirchendialog" - 2011 with President Nikolaus Schneider , 2012 with Günther Beckstein and Konstantin von Notz , 2013 with Wolfgang Huber and Volker Beck , 2014 with Franz Müntefering, 2015 with Ralf Kabelka and Gisela Matthiae , 2016 Olav Fyske Tveit , Jochen Cornelius-Bundschuh , Johanna Rahner , 2017 with Martin Dutzmann , Peter Scheben, Klaus-Dieter Ordemann and Kiflemariam Gebrewold) or the “ Academic Lunch Break ”, during the summer semester, during the summer semester, briefly understandable scientific short lectures are given (2011 on the Astronomy, 2012 about South Asia, 2013 about literature, 2014 about medicine, 2015 about writing and text cultures, 2016 about mathematics, 2017 word and music for the Reformation anniversary 2018 about life sciences).

The organ of the Peterskirche was built in 1984 by the organ building company Johannes Klais (Bonn). The instrument has 34 registers on three manuals and a pedal . The playing and stop actions are mechanical.

It is not known what the Peterskirche looked like in its original state of construction. 1485–1496 it was rebuilt in the late Gothic style and greatly expanded. The foundation stone for the new building was laid on March 16, 1485 by Alexander Bellendörfer († 1512), Chancellor and Protonotary of the Electoral Palatinate , whose epitaph is also preserved there. While findings from the late Romanesque and high Gothic predecessor buildings are largely missing, the dimensions of the late Gothic building (enclosing walls of the choir and nave) essentially correspond to the current church. In 1496 two chapels were added to the nave on the north and south sides. The sacristy on the south side was built a little later.

After the city's destruction in 1689/1693, the Peterskirche was a burned-out ruin with a tower stump. Thanks to a new spatial concept, the interior was transformed into a baroque cross-hall church. After the Baden Union of the Lutheran and Reformed Churches (1821), St. Peter's Church lost its importance.

From 1864 to 1870, thanks to the support of the university and with the funds the church had received from the sale of land for the construction of the Odenwald Railway (1859/60), it was generously converted into one under the direction of Ludwig Franck-Marperger three-nave hall church rebuilt in the neo-Gothic style prevailing at the time . Since then, only the choir, the old sacristy and the university chapel have remained in their medieval state. In 1883, the 400th birthday of Martin Luther , the Luther oak was planted on the east side of the church in his honor . For the university anniversary in 1884, the church tower was adapted to that of the Freiburg Minster . In order to protect the filigree spire from harmful weather conditions, however, it has recently been hidden behind a copper roof.

An extensive interior renovation took place in 2004/2005, as a result of which new principal pieces (altar, lectern, baptismal font, Easter candle holder) and a free-standing cross in the choir, which the artist Matthias Eder made of COR-TEN steel , were put into use. In July 2006, four new church windows by the important glass artist Johannes Schreiter were installed. There are three windows in the southern side chapel, the “University Chapel”, and thematize “Encounter”, “Resurrection” and “Persecution”. In the north side chapel, which serves as a prayer and meditation room, there is the glass window "Peace". In March 2008, a modern Christ sculpture by the Korean artist Lee Choon-Mann was placed there, inviting meditation and prayer.

Johannes Schreiter's designs for five windows in the nave were available in January 2010 . The three large Gothic windows thematize “Holy Spirit” and “Baptism” on the north side and “Heavenly Jerusalem” on the south side. Two smaller windows create the theme “Word” and “Sacrament”. These five windows were installed between November 2010 and July 2012, completing the now nine-window cycle of strider windows.