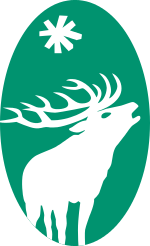 Logo of the park

Location of the park

The park extends roughly between the following places:

Larger places in the park

In the Orne department

In the Mayenne department

In the Sarthe department

The nature park in the border area between Normandy and the Pays de la Loire is geologically located in the transition zone of the Armorican Massif and the Paris Basin . This also results in different land forms and land uses . While the western part has a very tranquil, rural character, the eastern part, especially in the area around Alençon - which itself does not belong to the area of ​​the nature park - is more economically used. Characteristic of the huge park area are its bocage , forest and orchard landscapes, crossed by rivers and lakes as well as swamp , heather and raised bog landscapes. Particularly noteworthy are the large contiguous forest areas Forêt des Andaines and Forêt d'Écouves , in the vicinity of which the largest elevations of the nature park are located. In the southern section of the area are the Alpes Mancelles with their stony, wooded steep slopes.

Pear trees are often planted on the orchards of the area , the harvest of which is used in the traditional way to produce pear cider ( French: Poiré ), a special variety of the common apple cider . In Barenton there is the Musée de Poiré , which is specifically dedicated to this topic.