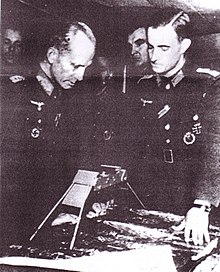 Reichert's parents were the medical officer Carl Reichert and his wife Margareta, née Averdieck. On November 18, 1912, he joined as a cadet in the German Order Infantry Regiment. 152 of the Prussian army in Marienburg and was promoted to mid-June 1914 lieutenant . Throughout the First World War he was a platoon and company commander and a battalion adjutant in this regiment . For his work he received both classes of the Iron Cross and the Wound Badge in Black.

After the war, Reichert fought in the Görlitz Freikorps from October 1, 1919 , which was set up in January 1919 in the area of ​​the General Command of the V Army Corps in Posen . It was in use in Görlitz , Magdeburg , Dresden , Munich and on the Ruhr . It was used to form the Reichswehr Brigade. On November 2, 1920 he married Charlotte Moritz.

In the Provisional Reichswehr he came to Infantry Regiment 3 in the Silesian Jauer on October 1, 1920 . In this regiment of the 2nd Division he was transferred to Deutsch Eylau on November 1, 1920 . From October 1, 1923 he served in the 8th (Prussian) Infantry Regiment and was promoted to lieutenant in the 9th Company in Görlitz on February 1, 1924 . On October 1, 1930 he became chief of the 16th company in Lübben and two months later a captain . From June 1, 1934, he was an air war tactics instructor at the Mürwik Naval School and rose to major on March 1, 1935 . Since April 1, 1935, head of course at the MSM, he came to the Air War School in Berlin-Gatow on April 1, 1936 in the same function and on June 1, 1936 to the Army Arms Master's School in the Treptow district . As a lieutenant colonel , Reichert became commander of the 59th machine gun battalion in Kassel on November 10, 1938 .

After 15 months in the Führerreserve , he became a colonel and commander of the 67th Infantry Regiment of the 23rd Infantry Division in Berlin-Spandau on December 1, 1940 . On February 1, 1942, he was returned to the Führerreserve. After six months he became commander of the Infantry Replacement Regiment 218 of Division 153 in Spandau. In the reserve army he was on September 19, 1942 commander of the reorganized Reserve Infantry Regiment 218 of the 153rd Reserve Division . On March 1, 1943, he was commander of the eastern troops for six months . Commissioned on December 7, 1943 with the management of the business of the commander of the field command office 619 (FK 619), he became its commander on February 18, 1944. On March 1, 1944, he came to the Führerreserve at the General Command of XXIII. Army Corps on the Narew with the 2nd Army . From September 1, 1944, he was assigned to lead the 292nd Infantry Division and was promoted to Major General on November 9, 1944. In this capacity, he was awarded the Knight's Cross of the Iron Cross on March 11, 1945 and led the division to the end March 1945. He fell ill on April 12th and was sent to a home hospital.

There is also unconfirmed information that he should have commanded the 558th Volksgrenadier Division from April 1945 . This information cannot be correct, however, since the division was led by Werner von Bercken at the end of the war, wiped out on March 28, 1945 and taken into Soviet (not British) captivity like Reichert.

According to his own statements, Reichert claims to have been promoted to lieutenant general on May 1, 1945 . However, there is no evidence of this, but he was also considered lieutenant general in an obituary. From May 8, 1945 to July 1, 1947 he was in English captivity .