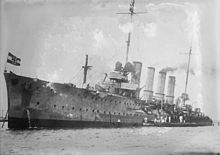 SMS Karlsruhe was a small cruiser of the German Imperial Navy which was used in the First World War . She was the type ship of the cruiser class named after her, to which SMS Rostock also belonged.

The construction of the cruiser, which bore the household name "Ersatz Seeadler ", began on September 21, 1911 at the Germania shipyard in Kiel. The launch took place on November 11, 1912 . The baptism was carried out by the mayor of the sponsored city of Karlsruhe , Karl Siegrist.

The Karlsruhe was the third German warship with a combined oil and coal firing. Due to some construction delays, it could not be put into service until January 15, 1914. After some modifications and the completion of the test drives, the Karlsruhe left Kiel on June 15, 1914 for her first and last assignment abroad. The commander at that time was frigate captain Fritz Lüdecke .

The Karlsruhe was intended for the overseas service on the East American station, which had been carried out by the small cruiser Dresden until then . As the German representative, she was to be sent to the opening ceremonies of the recently completed Panama Canal in Veracruz and to the World Exhibition in San Francisco in the fall of 1914 .

Via Ponta Delgada ( Azores ) we first went to Saint Thomas ( Virgin Islands ), where the coal reserves were replenished. After the assassination attempt in Sarajevo, a telegram called for immediate continuation of the journey and for the fastest possible union with Dresden .

On July 4, 1914, the Karlsruhe met with the small cruiser Strasbourg . The latter stayed until July 20, 1914 to protect German interests in the Dominican Republic and to reinforce the Karlsruhe in the Caribbean. The actual station cruiser Dresden was mostly in Veracruz since January 1914 because of the Mexican Civil War . In July, the former Mexican President Victoriano Huerta fled into exile on the Dresden in Jamaica .

On July 25, 1914, the Karlsruhe arrived in the roadstead of Port-au-Prince ( Haiti ). After the arrival of the Dresden the next day, the planned change of commanders was carried out. Frigate captain Erich Köhler took over the command of the Karlsruhe , while frigate captain Fritz Lüdecke moved to the Dresden . Both ships left the roadstead that same afternoon. The Dresden began the journey home, while the Karlsruhe began its service on the East American station. On July 28, 1914, the ship intercepted a radio message that diplomatic relations between Austria-Hungary and Serbia had been broken off. The war was now imminent. At noon, the Karlsruhe arrived in Havana ( Cuba ), where the ship was once again equipped with everything necessary. The cruiser left the next morning in order not to be surprised by the outbreak of war in the port. He was now heading east towards the Atlantic.

The operations of the Karlsruhe

On August 3, 1914, the cruiser received news of the state of war with France and Great Britain . The Karlsruhe had to wage cruiser warfare in the mid-Atlantic. Accordingly, from that day on the cruiser was ready to march. On August 6, 1914, the steamer Crown Prince Wilhelm of North German Lloyd was met at a previously agreed position east of the Bahamas . He should be equipped as an auxiliary cruiser ; for this purpose, the Karlsruhe gave two 8.8 cm guns and ammunition. The navigation officer of the Karlsruhe , Kapitänleutnant Thierfelder, took over the leadership of the auxiliary cruiser . Both ships were surprised by the British armored cruiser Suffolk while they were being fitted out. The work was stopped immediately and the ships ran on different courses. The Suffolk pursued the Karlsruhe , which, however, was able to escape quickly thanks to its higher speed. Because the Karlsruhe needed oil as well as coal for its maximum voyage, the commander wanted to call at the neutral port of Newport News . This plan failed, however, because the light cruiser Bristol was encountered at around 7:30 p.m. This had received an order by radio to cut off the Karlsruhe route to the north, while the armored cruisers Berwick and Suffolk were to be positioned in the south. During the short battle with the Bristol , the Karlsruhe scored two hits and was able to escape to the east undamaged. Frigate Captain Koehler now decided to run to San Juan ( Puerto Rico ). Karlsruhe arrived there on August 9, 1914 and immediately took over coal. With the support of the crew of the Hapag steamer Odenwald , 550 tons of coal could be taken over in 11 hours. The Karlsruhe departed again the next morning . She managed to escape to the Caribbean through an island passage, which according to the sea manuals was not recommended for larger ships . The Karlsruhe continued to search for seven enemy ships in the Atlantic. After a last stay in Willemstad on Curaçao , she began her pirate voyage.

At sea she met the Hapag steamer Patagonia (3,016 GRT, Captain Kodewey), which had been dispatched from St. Thomas with 2,000 tons of coal and plenty of supplies. The first prize was the British freighter Bowes Castle on August 18, 1914 (4,650 grt, 1913). From August 21 to 23, the Karlsruhe took over 1,300 tons of coal from Patagonia near Maraca Island, 130 tons of which on deck. On the 25th, the city ​​of Schleswig, owned by the Horn shipping company, met the other two with 800 tons of coal near the Sao Joao Islands. Over the next few months, the Karlsruhe crossed between the northeastern tip of Brazil and the equator . On August 31, the Hamburg-Süd steamer Asuncion (4,665 GRT) and the NDL steamer Crefeld (3,829 GRT) joined the small association, which had been sent to Karlsruhe with coal and supplies . The last supplier was the mail steamer Rio Negro (4..556 GRT) from Hamburg-Süd. 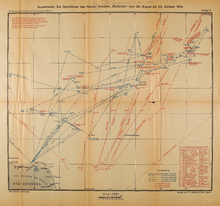 On the 18th the Glanton (3,021 grt) and on the 23rd the Hurstdale (2,752 grt) were sunk. Three prizes ( Strathroy with 5,600 tons of coal, - since September 5th - fern with 7,000 tons of coal and Indrani ) served at times as auxiliary and coal ships. All other ships were sunk, including the passenger steamer Vandyck (10,328 GRT, 1911, 15 knots, for 200 passengers) operated by the Lamport & Holt Line on October 26, 1914. It was the largest and last ship that the Karlsruhe was able to sink . The crews and passengers of all the captured ships were rescued in full. The Asuncion was released at the end of the month with the next prisoners to Para / Brazil.

The Karlsruhe now set course for the island of Barbados . It was hoped to be able to capture more ships in their roads. On October 29, 1914, the coal bunkers on the São João Islands were filled with a pinch of fern . Three days later the last coal supply took place on the Maraca Island ( Amapá ), this time from the Indrani pinch . Thereafter, the Karlsruhe continued on her way to Barbados with the escort ships Rio Negro and Indrani . The prospects of a successful coup against the island were good, as there was no longer a British warship in their vicinity. Admiral Christopher Cradock was on his way to the Pacific with his ships to intercept the East Asia Squadron under Vice Admiral Maximilian von Spee . In addition, the Karlsruhe had enough fuel available for a long time.

On November 4, 1914 at 6:30 p.m., east of the island of Trinidad , at the position 11 ° 7 ′ 0 ″  N , 55 ° 25 ′ 0 ″  W, coordinates: 11 ° 7 ′ 0 ″  N , 55 ° 25 ′ 0 ″  W , a very violent explosion in the forecastle. This immediately sagged. The command tower , bridge , foremast and front chimney flew overboard in a high arc. The Karlsruhe sank in just 27 minutes. 263 men, including the commander, were killed, many of those thrown overboard - the crews were in the forecastle below deck at this point - were still burned in the water. The cause of the sudden detonation could not be clearly established. On the one hand, it was suspected that the ammunition in the foredeck was igniting. Another possible cause was the explosion of the lubricating oil captured by the Condor Prize after decomposition at high temperatures, which, mixed with petroleum, had been used as heating oil for one's own boiler. The self-ignition of the artillery ammunition in tropical heat is more likely, since the Admiral Graf Spee also had difficulties cooling the ammunition during her war voyage in the tropics in 1939 in order to prevent it from spontaneously igniting, and the fate of the Karlsruhe was remembered. 11.116666666667 -55.416666666667

146 survivors were able to start their journey home with the escort ship Rio Negro under the leadership of the chief officer, Kapitänleutnant Studt. For the crew, this was both a physical strain and a brilliant navigational achievement. Since the sinking took place in tropical waters, the rescued crew only had light clothing on and was very cold on the journey home. They made do with replacement clothing made of woolen blankets and canvas for the guards and sent the others to the warm boiler rooms. The Rio Negro was only intended for tropical service, so there was no map material for the northern regions around Iceland and Norway. It shows the seafaring ability that the Rio Negro reached Kiel on December 6, 1914, unnoticed by the enemy, despite the winter storms and the detour via the ice regions. It was then brought to the North Sea via the Kaiser Wilhelm Canal and anchored on the jade. The secrecy about the sinking of the Karlsruhe and the return of the survivors was so complete that the Royal Navy searched for the German cruiser until April 1915.

The Karlsruhe was after the Emden , which was the most successful German cruisers in distant waters to plunder.

Sinks and prizes of the cruiser Karlsruhe

Small cruiser of the Karlsruhe class