Stepfershausen is a district of the southern Thuringian district town of Meiningen in the Franconian south of Thuringia .

Stepfershausen is located in the west of the urban area and is located northeast of the Hohe Geba , which belongs to the Vorderen Rhön and with which it is connected by the Rhön-Rennsteig hiking trail (former local connection between Stepfershausen and Geba). The connecting road between the district towns of Meiningen and Fulda in Hesse runs through Stepfershausen . From Stepfershausen you have a good view of the south side of the Thuringian Forest and the Dolmar mountain , as well as the Inselsberg , to the left of it and clearly visible from the Gebaberg is the Pleßberg , located in the front Rhön. The Solz brook has its source in the village and flows into the Katza brook near Mehmels .

In 863 Stepfershausen was first mentioned as Starcfridershusen . Parts of the 1200 m long village wall , built around 1600, have been preserved and are up to 5 m high. A castle was the predecessor of the current church. The fortified churchyard, the high wall ring and the gate tower emerged from it, which are still well preserved. This fortified complex was mentioned in 1389. During this time, knights also named themselves after the place. The place originally belonged to Cent Wasungen in the county of Henneberg -Schleusingen, but came to the Amt of Maßfeld in the 14th century . Stepfershausen was persecuted by witches from 1597 to 1647: three men and two women were accused in witch trials and three people were executed. The first victim was Elsa Ritz in 1597.

After the division of the county of Henneberg in 1660, the place again briefly belonged to the Wasungen office until 1672 and then came back to the Maßfeld office in the Duchy of Saxony-Meiningen . In 1825 it was affiliated with the Meiningen office. On October 16, 2018, the municipal council decided on voluntary integration into the city of Meiningen, which took place on December 31, 2019.

Gate tower of the former castle

Stepfershausen and Träbes (approx. 2 km in the direction of Hohe Geba) form the local council.

The district council of Stepfershausen and Träbes consists of 8 council women and councilors. 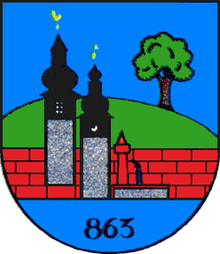 The historical community symbol is heraldically incorrect. It shows a blue shield, in the base of the shield with the number 863, this indicates the year of the first documentary mention. The blue base of the shield stands for numerous springs and the abundance of water in the area. A red brick wall with black grooves symbolizes the town's cemetery wall. In front of it are a fountain, the main landmark of the place and two towers, the church tower and the gate tower. In the background, a green hill symbolizes the eastern slope of the Hohe Geba, with a green tree on top.