The marsh spurge ( Euphorbia palustris ) is a species of the genus spurge ( Euphorbia ) within the family of the milkweed family ( Euphorbiaceae ). Their distribution area extends from Europe to Asia to southeast Siberia and the Altai Mountains. It grows along river banks, oxbow lakes and lakes. It also thrives in saline locations such as salt marshes or sea coasts. Its existence is considered to be endangered. 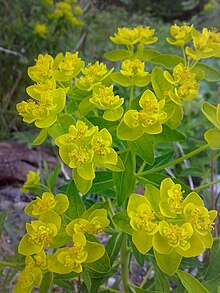 The swamp milkweed is a perennial , herbaceous plant that reaches heights of 0.5 to 1.5 meters. She has a strong habit. A thick-rolled, multi-headed, branched and richly rooted Pleiokorm - rhizome serves as a storage and persistence organ . The root system of the swamp milkweed shows some special features in the course of its development. In the first two years the main root and the hypocotyl form a perennial beet as a storage organ. At this stage the species is classified as a beet geophyte in terms of its life form . From the third year onwards, the beet branches out, leaving a central rhizome that grows and becomes woody as the plant ages. Basic sections of the branches formed continue to grow and subsequently form axillary buds through which the innovation takes place. These branches are shoot axes with adventitious roots. These features speak for a Pleiokorm system as a storage organ, which u. a. is characterized by the possibility of sprouting, but does not lead to the formation of independent partial plants. Since the swamp milkweed is also capable of vegetative reproduction via runners, the storage organ is classified as a transitional form between the pleiocorm and the rhizome. According to Hegi, long-creeping runners can ensure vegetative reproduction . However, more recent studies indicate that successful spreading takes place largely via seeds , whereas vegetative propagation by runners is negligible, and that only short runners are formed.

Like all species of the genus milkweed, E. palustris also produces milky sap , which u. a. Contains ester of 20-deoxyingenol . In terms of its caustic and skin-irritating effects, it is rated as relatively mild compared to other species of the genus. It is very likely that it has a protective function against snails, herbivorous insects and grazing animals.

The branch axis in the upper area grows upright. It is hollow on the inside and up to 15 mm thick. Hairiness is not formed. Overall, it has a light bluish tinge, often overflowing with red at the bottom. In autumn the reddish color changes to purple. Young plants can only consist of one shoot, older plants can develop up to 120 shoots. The bluish green, sessile and bare leaves have no stipules . They are arranged in alternate leaf positions along the stem axis and the side branches . The leaf surface is water repellent. Leaves located on the stem axis develop an average length of 9.2 and a width of two centimeters. In the middle stem axis area they are 4-8 centimeters long. The smaller leaves of the side branches have an average length of 4.6 centimeters with an average width of 1.2 centimeters. The leaf shape varies from lanceolate to elongated-lanceolate, with the leaf narrowed on both sides. The tip of the leaf can be blunt or pointed. The leaf margin is usually entire. The area of ​​the tip of the leaf is sometimes small and sawed away. The red color of the leaves in autumn is striking.

The flowers of the marsh milkweed are organized in complex inflorescences . The individual flowers are arranged in cyathia, which are typical for the species of the genus milkweed . These combine to form a pleiochasium , an umbel-shaped thyrse . Some authors interpret the cyathium itself as a thyrse and the entire inflorescence as a compound thyrse. The total inflorescence consists of an average of 12 main inflorescence rays, which first fork three to five times, and then triple, with each end branch ending with a terminal cyathium. It is surmounted by lateral, non-flowering branches usually several centimeters. At the base of each main ray there are two to four ovate-rounded, blunt, yellowish bracts. The cyathium is covered by two yellow, obovate bracts, which some authors also call envelopes.

The 3.5 to 4 millimeter long enveloping cup of the cyathium is formed from five bracts that are fused together . At the edge there are usually four extra-floral oval and waxy-yellow nectar glands that have no croissants. The cyathium contains only unisexual flowers, which also have no flower envelope . In the center is the female flower, which consists of an upper, triple, stalked ovary . It merges into three otherwise free styluses , each with two scars, connected at the base . The male flowers are grouped in five groups of three to six around the female flower. They consist of a single stalked stamen with two anthers . The flowering period extends from May to June.

An upright, three- compartment capsule is formed as the fruit, each compartment containing a seed. It is round in shape, 5 to 6 millimeters long and wide and abundantly covered with short warts. The gray-brown-black, egg-shaped to round seeds are smoothly structured. Their surface is slightly shiny. They have a pale, raised elaiosome 1 by 1.3 millimeters.

The marsh milkweed is considered to be a long-lived hemicryptophyte in terms of its life form , which can live for several decades. In the first two years the form of life corresponds to that of a geophyte , which under certain circumstances can occasionally be found in older plants. Studies have shown that when the rhizome divided, replanted sections began to grow again.

The swamp milkweed is pollinated by insects. Typical pollinators are flies, hoverflies, ants, beetles and bees with a medium-length glossa , with flies being the main pollinators. The insects are attracted by the conspicuous, yellow nectar glands and the bracts of the inflorescence. Studies indicate that the swamp milkweed is markedly self-incompatible, i.e. it is absolutely dependent on cross- pollination as a basis for successful fruit set.

When the fruit ripens, the capsules dry out and finally burst, breaking up into three small, double-lobed partial fruits, known as cocci . The seeds can be thrown a few meters here ( self-propagation ). Ants that are attracted by the eliosome located on the seeds can take over the further spread . The seeds contain aerenchyme, a ventilation tissue that enables them to swim on water. Because of their location along rivers, such a long-distance spread over water seems possible. Studies showed that germinable seeds retained their buoyancy for one (50%) to more than 7 weeks (30%).

Existence in the natural location in the Marchauen

The natural range of Euphorbia palustris extends from Europe to Asia to southeast Siberia , the Altai Mountains and northwest China.

The marsh milkweed is one of the few species of milkweed that can grow on very wet soils . As a typical river valley plant it occurs along river banks , oxbow lakes and lakes. Alternately leaving among their habitats periodically flooded Hochstaudenfluren , wetland meadows , ditches and patchy reedbeds . It also thrives in saline locations such as salt marshes or sea coasts.

As a swamp-loving plant, it used to be found very frequently in Central Europe along all of the larger river valleys such as the Danube, Elbe and Rhine. Their distribution there, however, has decreased significantly due to expansion and agricultural use. The populations are mostly limited to river banks, abandoned meadows and the edge areas of willow bushes. Due to the lack of natural flow dynamics, periodic flooding usually does not occur.

As a salt-bearing plant ( pointer value according to Ellenberg for salt number = 1), marsh spurge can thrive with low to moderate salt exposure. In southern Scandinavia, deposits are mainly found on the coasts of the North and Baltic Seas. In Hungary it grows in inland salt marshes , in Italy on the shores of the brackish lake Lago di Burano .

In Austria, marsh milkweed occurs rarely in alluvial forests and in wet, nutrient-rich meadows and reed beds in the federal states of Vienna , Lower Austria , Burgenland and Upper Austria .

In Central Europe it is considered to be a character species of the Association Speedwell -Swamp- Spurge Society ( Veronico longifoliae-Euphorbietum palustris Korneck 1963). This association characterizes occurrences in river valleys, which are mainly characterized by tall plants such as the name-giving marsh milkweed and the long-leaved speedwell . The synsystematic position of the association is controversial. She is z. B. from some authors to the Association of Bachuferfluren, Meadesüß-Uferfluren, wet tall herbaceous vegetation ( Filipendulion ulmariae Segal ex Westhoff et Den Held 1969) in the order wet, wet and strewn meadows ( Molinietalia ), from others to the Association Nitrophytische Ufer-Staudenfluren the larger ones Associated with rivers and streams ( Senecionion fluviatilis Tx. Ex Moor 1958). The plant is also found in companies of the Magnocaricion association .

The swamp milkweed is considered endangered in Austria and is threatened with extinction in the northern foothills of the Alps .

According to the Federal Species Protection Ordinance, marsh spurge is placed under special protection in Germany. In 1996, the Red List of Endangered Species of the Federal Agency for Nature Conservation rated this species as “endangered” (3).

The marsh milkweed is occasionally used as an ornamental plant, especially on pond edges. It prefers partially shaded to sunny locations.