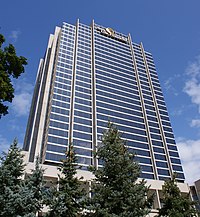 Sun Life Financial Inc. is a Canadian company headquartered in Toronto , Ontario . Sun Life Financial offers a variety of financial services, including life insurance . The company, which is mainly active in the North American and Asian markets, employs around 27,800 people. The company is listed on the Toronto Stock Exchange share index S & P / TSX 60 listed.

In 1865, the Sun Life Assurance Company of Canada was founded by Matthew Hamilton Gault, an Irish immigrant. The company started operations in 1871. At the end of the 19th century, the company expanded in Central and South America, the USA, Great Britain, the Caribbean, Japan, China, India and North Africa. During the Second World War , the British Crown Jewels and the gold reserves of several European countries were stored for safekeeping in the Old Sun Life Building . After the Second World War, the company developed and expanded in the field of life insurance worldwide. In 2000 the company went public in Toronto.