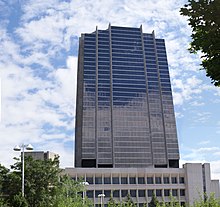 The Sun Life Financial Building is the tallest building in Waterloo.

Waterloo [ ˌwɑɾəɹˈluː ] is a Canadian city located southwest of Toronto and belongs to the province of Ontario . It is the smallest of the three cities that together make up the Regional Municipality of Waterloo ( Cambridge , Kitchener and Waterloo) and is close to the larger city of Kitchener . Waterloo has 124,600 inhabitants (as of 2011).

Waterloo is the headquarters of Blackberry . Its founder and former co- CEO Mike Lazaridis made available 100 million dollars in private funds in 2000 in order to found the Perimeter Institute for Theoretical Physics, also located in Waterloo . In 2002 he provided more than $ 100 million to found the Institute for Quantum Computing .

Waterloo was founded in 1804 by Mennonites from Pennsylvania. An important settler was Abraham Erb , who is considered the founder of Waterloo because the two lots of land he owned later formed the core of Waterloo. In 1816, one year after the Battle of Waterloo , the city was given its current name. Around the 1840s, many German emigrants settled near a town in the southeast of Waterloo, which was called Berlin in 1833. As a result of a referendum driven by anti-German sentiments during the First World War , the place was later renamed Kitchener .

Waterloo is centrally located in the province of Ontario. The city is located approximately 100 km from Toronto , 80 km from London and Mississauga . In the immediate vicinity are the larger cities of Guelph , approx. 25 km away, and Kitchener , which borders directly on Waterloo.

Waterloo has a strong research and service oriented economy. Several major insurance and high-tech companies as well as two universities are located in the city. The largest companies headquartered in Waterloo are Sun Life Financial , the University of Waterloo , Manulife Financial , Blackberry, and Wilfrid Laurier University .

The German family company Handtmann has a service and sales branch in Waterloo for the area of ​​filling and portioning systems.

The city is a member of Canada's Technology Triangle (CTT) , a network of other cities in the Waterloo region, such as Kitchener and Cambridge, which make the region more international.

The Perimeter Institute for Theoretical Physics

In addition to several elementary and secondary schools and two universities in the city, the Perimeter Institute for Theoretical Physics is also located in Waterloo. The independent research institute deals with the basics of theoretical physics and organizes summer camps for schoolchildren in the summer months.

The Sunfish Lake near Waterloo.

Around 26,000 students study in six departments at the University of Waterloo , where they can obtain their bachelor's or master's degrees. The Wilfrid Laurier University is a small university with about 12,000 students in four subject areas.

In Waterloo there are a total of five recreation parks with lots of green space and sports facilities. The RIM Park is two square kilometers and also houses an 18-hole golf course. The Waterloo Park is located in the city center and has an area of 45 hectares. The park is known for its annual winter decorations during the Christmas season, also known as the "Wonders of Winter". The Bechtel Park covers 44 hectares and has several outdoor sports facilities. It also houses a dog park.

The Grand River flows east of the city limits.

There are other sights in Waterloo:

Every year the largest Oktoberfest outside of Germany takes place in Kitchener and Waterloo.

Waterloo does not have a train connection. The next stop for trains on Via Rail Canada is the neighboring town of Kitchener. The train station can be reached by public transport via Downtown Kitchener.

The city built a tram line to Kitchener and Cambridge, the Ion rapid transit . The trial operation with railways, still without paying passengers, began in December 2017 with 2 trains, regular operations on a section of the route opened in 2019. In the first few years (stage 1), the route from Waterloo to Cambridge is still used by express buses, Bus Rapid Transit BRT, here called ION-LRV, only in a later stage (stage 2) will rail-bound trains run continuously on the same route .

So far, the airport has only been served by smaller planes, but recently due to increasing passenger numbers, regular connections have also been offered. Westjet Airlines has set up a daily service from Waterloo to Calgary with a Boeing 737-700. WestJet Airlines has also offered a connection to Vancouver since June 2010 . Bearskin Airlines has been offering scheduled flights between Waterloo and Ottawa since autumn 2007 . During the winter months, Sunwing Airlines offers connections to the Dominican Republic .