Transport in prehistory and early history

In the beginning man carried his burdens. In the history of traffic, however, he quickly developed systems and devices that made this work easier. 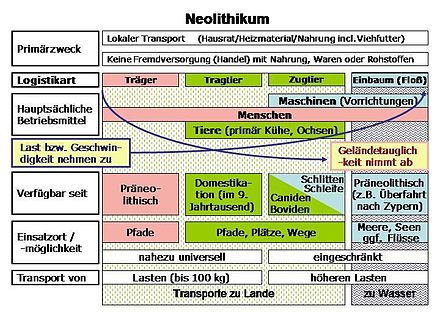 Transports of the early days

Many hunters and gatherers were porters. A carrier has the greatest off-road capability . He climbs steep mountains and doesn't even need trails to reach residential areas, rivers or lakes. Even today, loads are carried by people ( Sherpas ), even over great distances in impassable areas. In the Neolithic Age , two types of main food were moved - seasonal and permanent. On the one hand, mature cultivated plants had to be transported to the living space, treated and stored if necessary. On the other hand, herds of animals were moved around by nomads and kept alive.

Early carrying aids were the plaited fur bag , the basket , the box , the backpack , nets , hollowed-out pumpkins , the shoulder strap or a branch, with the help of which hunters carried their prey and collectors from the found place to the living space. The baby sling followed with the development of textiles. The carrying yoke is a one-man shoulder carrier that was used to carry baskets or buckets into the 20th century.

It cannot be determined when carrier animals were first used. Remains unclear, z. B. whether the dog , which carries loads of up to 15 kg and was domesticated very early, was already being used as a pack animal. With the cattle at the latest in the 9th millennium BC. BC domesticated a workhorse that could carry weights of up to 100 kg. Through further domestications came, in some cases much later: dromedaries (150 kg; 50 km / day), elk , donkey (90 kg; 25 km / day), gaur , llama , horse , reindeer , trample (250 kg; 35 km / day) Day) as well as yak and zebu , which are still in use today as carrying, riding and draft animals in impassable areas .

The pulling power of each animal species is several times greater than its carrying capacity . The work initially performed by cows does not require the invention of the yoke (possibly several times) , but it can be around 3500 BC. In the Baden culture , where skeletal changes in cattle refer to it. However, the evidence for this is more recent. The pulling power for the transport was preceded by the work of oxen before the plow . The castration of bulls, which has been documented since the band ceramics , eliminated their aggressiveness and made the enormous force controllable.

In ethnological research, Peter Bogucki and Paul Halstead came to the conclusion that the use of migrating cattle increased agricultural production considerably. This was primarily done over the larger arable land, which is easier to work on.

The combination of draft animal, yoke and plow is followed by the invention of dragging transport systems with some automatism. Bakker also recognizes the line of development yoke, plow and ox, who sees the close connection with the plow, the yoke, the castration of bulls and the use of their pulling power. In view of the use in the fields and in the forests of Central Europe, a rod loop pulled by animals , which implements the skid principle in a pulling device, was the next logical step. The oldest loop that has survived comes from Lac de Chalain in the French Jura and dated a few years before 3100 BC. Chr.

Grinding systems can only be used when moving forward. While the drawbar of a loop is integrated into the load carrier , which indicates its origin from the plow, straps or ropes were used when combining sleds and draft animals . This solution does not require a yoke, allows the use of a single draft animal and points to a different line of development. Heavily loaded sledges require a film of water to slide and are therefore limited to use near water or to use on ice and snow.

In North America , the prairie Indians used dogs as pack animals or draft animals of the travois , a small loop of bars that may have been in use at the same time or before the ancient loops. They later adapted the Travois to the size of the horses that were now available.

In principle, rollers can also be used for rolling loads. Consequently, their use, e.g. B. in the transport of megaliths , sought to prove. Their application requires, since rollers tilt very easily due to their extremely high rolling resistance , which is often overlooked, a solid, completely flat, i.e. prepared route . It was therefore probably only in the Bronze Age that rollers made it easier to transport sleds or stone blocks with a smooth underside on a frequently used short route, for example between the Nile boat and the construction site for building a pyramid . Transport rollers, on the other hand, have never paved the way for the wheel.

The wheel may have been invented anywhere, but without an axle or shaft it was useless. The innovation consisted of placing two wheels on stationary axles or the ends of a shaft. Usable wheeled vehicles emerged in Europe during the end of the Neolithic . Their use expanded the logistical potential compared to the grinding systems, but initially required the naturally occurring, stable ground (such as the steppe provides). In addition to load and route, the rolling resistance resulting from the wheel size has an impact on the usability of vehicles. The first wheels were disc wheels, which were cut from the center of the trunk in the size of a tree trunk, but not crosswise, but in the direction of growth. Multipart wheels found in moors quickly increased the diameter. But only the Bronze Age invention of the spoke made really large and comparatively light wheels possible.

The cart is an early circumalpine phenomenon that completely takes over the function of the loop of which it is a daughter. Its rotating shaft absorbs axial unevenness (e.g. the groove erosion of a route) better than the wheel hubs that sit on the stationary axle journals of the ancient wagons. An early cart in Central Europe was the so-called triangular car . It originated from the loop equipped with a wheel set at its broad end.

Carts appear around 3500 BC Chr. In Harappa varied as clay models.

Indo-European (IE) linguistic research provided information about the origin of the car . Axis (* hakhs), drawbar, yoke (* iuk´om), hub, wheel (* rotho) and car are supposed to be words of the proto language (PIE), which were synonymous at the moment the car was invented. This indicates a relatively early date for the invention.

The Maykop culture (between 3700 and 3000 BC in the West Caucasus ) knows wagon wheels as grave goods . However, it can be assumed that the car had at least a short mundane lead time (existence) before it achieved status or sacred character. The Maykop culture had apparently gained experience building sleds in a cold winter landscape and needed a wagon with the typical characteristics of a wagon. Veselovsky found wooden tools during his excavation in Majkop in 1897 . There was nothing to prevent the use of sleds in the steppe . Sledges have the same advantages that a winter troika still offers today. Their use could even be much older than previously assumed, since the Siberian tundra , which remained free of glaciers, was inhabited during the Ice Age. Sledges can also be used on summer days on circumpolar permafrost. In Northern Europe the (today) reindeer keeping Komi use the sled all year round. The first draft animals to be considered are the dogs (sled dogs), domesticated a few millennia before the large animals, which may have made the Paleolithic hunt easier. However, an invention as complex as that represented by vehicles cannot be combined with nomadism. This is how the wagon was created in Eastern Europe in a semi-nomadic steppe culture that had all the resources, all the prerequisites and the needs (e.g. shepherd's carts ).

The previously uninhabited Cyprus became around 9500 BC. Visited by hunters and gatherers from the Levant ( Aetokremnos ). Melian obsidian was found in the late Paleolithic layers of Franchthi in Attica (Greece), evidence of the use of watercraft.

Swimming aids, such as unprocessed wood or air-filled animal skins, cannot be grasped in their temporal depth. The raft was created by bundling the floats, which could also consist of reeds or ceramic vessels. Mesopotamia, Egypt and Greece used such solutions according to the local tradition up to historical times.

The original boat, built in Central Europe into the 20th century and used as part of inland shipping, first appeared in Denmark, France and the Netherlands in the 8th to 6th millennium BC. Chr. On. Mesolithic dugout canoes have been found in the Netherlands, Germany and Denmark ( Møllegabet ). Skin-covered vehicles are likely to be of a similar age, but archeology can hardly understand them. Dugout canoes were common in the Old World during the Neolithic Age. More complex solutions with pinned or lashed mirror boards and attached wash shelves appear as early as the end of the Danish Mesolithic (around 5000 to 4300 BC). Monoxyl-produced frames and Duch pads only emerge as technical influences of Bronze Age plank ship building in northern European tradition. Around the Mediterranean Sea, the dugout canoe seems to have played only a subordinate role since the later Bronze Age.

The bark canoe, which is particularly popular in tundra areas, derives a substantial part of its shape from the growth of trees, but becomes a borderline case because its outer skin had to be glued or sewn and held in shape by means of integrated stiffeners.

Skin-covered watercraft, so-called “fur boats” represent something different, which are morphologically determined not by their leather cover, but by the supporting structure. Based on South Scandinavian rock carvings and ship paintings from Bronze Age and Iron Age art, the beginnings of Nordic boat building are equated with that technique, whether fully or only to a significant extent, is an open question. Reindeer antlers from Husum with traces of processing and belonging to the Ahrensburg culture (9th millennium BC) can be the oldest material evidence. Skin-covered boats were not only common in the polar region via northern Siberia to the Aleutian Islands, but also in Mesopotamia, in the northern Italian Venetian region and in the Roman province of Hispania Tarraconensis; finally in the north-west of old Europe where their tradition has held up to our days ( curragh ).