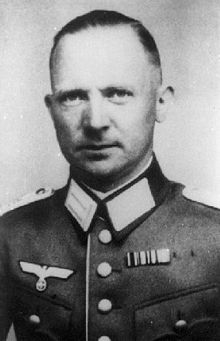 Walter Karl Friedrich Assmann (born July 22, 1896 in Mühlhausen / Thuringia , † May 1, 1964 in Offenbach am Main ) was a German officer , most recently lieutenant general in World War II .

As the son of a merchant born Assmann occurred on August 10 in 1914 following the outbreak of the First World War as a volunteer in the 2nd Recruit Depot of the first upper-Alsatian Infantry Regiment. 167 in Kassel one. After his transfer to the 8th  Company of the Reserve Infantry Regiment No. 234 on August 28, 1914, he came with the regiment to the Western Front and was promoted to NCO on March 22, 1915 . He received his first wound on April 24, 1915 from a rifle shot in his right arm, which resulted in a hospital stay in Bad Driburg . Left in the Reserve Infantry Regiment No. 234, Assmann was assigned to the 5th Grand Ducal Hessian Infantry Regiment No. 168 on June 18, 1915 and returned to the 11th company of his old regiment on July 1, 1915, where after his promotion to lieutenant on August 18, 1915, he took over the post of platoon leader .

After an illness in October 1915 and a subsequent stay in Army Hospital 6, Assmann was back at the front and was subsequently assigned to Ghent for an officer training course from December 5 to 23, 1915 . From August 16 to September 5, 1916, he served as an infantry liaison officer to Reserve Artillery Regiment No. 51. After he was deputy adjutant of the 102nd Reserve Infantry Brigade until May 4, 1917 , he received on 10 July 1918 he was transferred to the staff of the brigade in order to take up the post of deputy adjutant again from October 9 to 27, 1918.

From 12 September 1919, Assmann was at the Clearing House of Infantry Regiment 168 and was finally on 20 January 1920 the character as a lieutenant retired from military service. At the end of the month he received permission to wear the uniform of the 5th Grand Ducal Hessian Infantry Regiment No. 168.

In the following years he was a platoon leader of the Marburg Student Battalion in Thuringia and then was in the Bavarian Rescue Service in Würzburg . Assmann then began studying dentistry, which he called Dr. med. dent. completed. In Würzburg he became a member of the youth movement reformed student association Deutsche Hochschulgilde Bergfried .

With effect from July 15, 1934, while being promoted to captain at the same time, he was hired in the 13th (Württemberg) Infantry Regiment of the Reichswehr and assigned to the 2nd Battalion. He took part in a training course in Döberitz until September 14, 1934 , and on October 1, 1934 became chief of the 3rd Company of the Heilbronn Infantry Regiment, later the 34th Infantry Regiment, where he was also appointed on September 30, 1938 Major was promoted.

On November 10, 1938, Assmann changed as commander of the 3rd Company to the Border Infantry Regiment 125 and, after the attack on Poland , was from November 2, 1939, in command of the headquarters of the XII. Army Corps . With effect from April 1, 1940, he was appointed commander of field recruits battalion 125, and from June 2, 1940, commander of the 1st battalion of 479 infantry regiment.

Assmann was wounded on June 14, 1940 and promoted to lieutenant colonel on August 14, 1941 . After his recovery he took over the regimental command on the Eastern Front . On January 18, 1942, he took over command of the 478 Infantry Regiment, shortly thereafter he was promoted to colonel . For the success of the regiment under his command, he was submitted for the award of the Knight's Cross of the Iron Cross , but the decision was negative.

On May 24, 1944 he was transferred to Army Group Northern Ukraine for use as deputy division leader, there Assmann took over the leadership of the 101st Jäger Division on July 12, 1944 , and on September 1, 1944 he was promoted to major general . In the battles of the division around Lemberg , in the defensive battles south of Schemnitz , eastwards Altsohl , in the Grantal around Altsohl and Neusohl , he distinguished himself in particular, with a deed at Großmichel on February 10, 1945, leading to the award of the Knight's Cross.

After being promoted to Lieutenant General on March 29, 1945, Assmann saved many of his soldiers from being captured by the Soviets after the defensive battles west of the Lower March and subsequently in northeastern Lower Austria, and led them to Rosenberg following an agreement with the 26th US Infantry Division in American captivity.

Soon released from this, Assmann went to work as a doctor.