Weichselberg (also gentlemen, counts of Weichselberg , Waihselberg , Weichselberg , Weixelburg, later more Weichselburg ; Slovenian: Gospodje , also grofje Višnjegorski , named after Višnja Gora ) is the name of a noble family with ancestral seat in the Lower Carniola . They were raised to the rank of count in the 12th century and were already extinguished in the 13th century or were inherited by those of Pranckh (noble family) . The noble family is the Ukrainian branch of the von Puchs (noble family) (also Pux, Pris, Puxer) with the Styrian family castle Puchs (Pux) . Others see the family as the descendants of an old Salzburg noble family called Pries or de Patris ( de Pux ).

The noble family came from a sideline of the Margravine Hemma von Gurk . The brothers Dietrich , Heinrich and Meinhalm thus belong to the so-called Hemma-Askuin clan . Before the Lords of Weichselberg settled in Krain, they were called Puchs ( Pux , also Pris ), so named after their ancestral castle Puchs (Pux), located in Styria near Teufenbach on the upper reaches of the Mur . At the beginning of the 11th century the family was divided into the Styrian (Heinrich) and the Carniolan branch (Dietrich and Meinhalm). The latter were now called von Weichselberg after their new headquarters in Lower Carniola . However, the title of count was only awarded to Albert von Weichselberg († 1209) in recognition of his participation in the Third Crusade (1189–1192). According to others, the Lords of Weichselberg are said to be descendants of an old Salzburg noble family called Pries or de Patris ( de Pux ); the brothers Heinrich, Dietrich and Meinhalm are mentioned.

Two great services are attributed to the Lords of Weichselberg: The brothers Heinrich ( Henricus ), Dietrich ( Dietericus ) and Meinhalm ( Megenhalmus ) von Weichselberg made the foundation of the Sittich ( Stična ) monastery possible by donating large estates, which served as the first economic basis was made available, and the extension of the borders of Carniola to the southeast to the river Kulpa (Slovenian Kolpa, Croatian Kupa) and the Uskokengebirge as well as the colonization of these areas.

Endowment of the parakeet monastery

The Parakeet Monastery was founded by the Patriarch of Aquileia Peregrin (deed of foundation: 1136). Dietrich von Weichselberg was the patron and protector of the original parish of St. Veit ( Šentvid ), located just under two kilometers east of the planned building site , from where the first monks had operated since around 1132. It was not until later, in 1145 and 1152, that the Weichselbergers became benefactors of parakeets: in 1145, the aforementioned brothers Dietrich, Heinrich and Meinhalm donated some Huben to the monastery, and in 1152 Countess Emma von Weichselberg (identical to Hemma von Friesach, the wife of Wolfrad von Treffen ) with the Consent of their brothers Heinrich and Meinhalm das Allod Babindorf ( Bodendorf west of Murau ) with the surrounding areas ( "totum allodum meum dominicale in loco qui dicitur Babindorf cum omnibus servis et ancillis [...]" ) and their brother Henricus Brisi and his wife Liebyrc the Allod Radolfsdorf ( "allodium quod dicitur Radolfsdorf" ). The relationship between Count Albert von Weichselberg († 1209), Meinhalm's son, and the monastery does not seem to have been particularly friendly, he is said to have caused considerable damage to the monastery.

The second action was not entirely due to the Weichselbergers either. At the beginning of the 12th century, the border between the Windische Mark and the Mark Krain with Hungary and Croatia ran along the upper reaches of the Gurk and north of the Uskoken Mountains. Around 1127 (-1131) the Weichselbergers, together with Bernhard von Trixen from Spanheim and the troops of the Archdiocese of Salzburg, launched an offensive against Hungary and Croatia, whose armed forces they crossed the Kulpa and Bregana rivers (south of the Sichelberg and the Sichelberg, the Žumberak Mountains) ) pushed back. From the areas conquered by the Counts of Weichselberg in the borders of Poljanska Gora in the west, along the Kulpa to the western foothills of the Uskoken Mountains in the east, the White Mark (also White Carniola , Bela krajina , County Möttling , see Metlika ) arose .

Count Albert was the last male representative of his sex. His son (Albert?) Likely died at a young age and before his father. Albert's daughter Sophie († 1256 in the Admont Monastery ) thus became the heiress of the huge Allode, who with her marriage (1207) to Heinrich von Andechs-Meran , Margrave of Istria , now fell to the Andechs family. Vistula vassals now became those of the Andechs-Meranians . Including Meichau (Štih, p. 136). After Heinrich's death (1228), the Weichselberg inheritance came through Heinrich's brother Otto and his daughter Agnes, first to Duke Friedrich II of Austria , the last Babenberger , and then to Duke Ulrich III. , the last Spanheimer to rule in Carinthia , and then to the Bohemian King Ottokar II and, after 1276, to the Habsburgs . The Styrian possessions, especially the family castle Pux, came to the Pranckh family through the marriage of the heiress Anna von Pux.

Side branch: Counts of Schönberg

Schönberg Castle ( Grad Šumberk ), today some remains of the wall, once a mighty castle in Lower Carniola southwest of Treffen ( Trebnje ), was also owned by the Puchser or the Lords of Weichselberg, if not their foundation. In the period from 1141 until after 1181 a Meginhardus de Sconenberge (Meinhard von Schönberg) appears in a document who resided on Schönberg. The new seat in Lower Carniola was named after Schönberg Castle, a Puchser castle west of Judenburg . Meinhard von Schönberg also called himself von Schwarzenburg , after a property in Istria that was previously owned by the Counts of Weimar-Orlamünde , as well as “comes Meynardus de Hystria”. He was also Vogt of the Church of Parenzo ( Poreč on the Croatian Adriatic coast) and tenant of Mitterburg ( Pazin , it. Pisino ) in Istria . Meinhard, who died between 1183 and 1186, had two daughters. Mathilde "comitissa de Pysino" was with Count Engelbert III. von Gorizia married, whereby the Gorizia also got the title of Vogtes von Parenzo and Mitterburg. But Schönberg fell back to the Puchser and Count Albert von Weichselberg.

The extensive possessions ( allodes ) of the Weichselbergers lay scattered in a wide strip that ran in the northwest of Littai ( slo : Litija ), Weichselberg ( Višnja Gora ) and the upper reaches of the Gurk ( Krka ) and in the southeast to the southern and southwestern foothills of the Uskoken Mountains ( Gorjanci ) was enough. On the castles of the Weichselbergers sat their castle captains and ministerials, who also named themselves after the respective rulers: 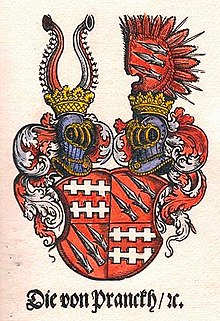