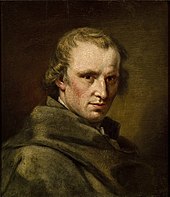 Johann Jakob Wilhelm Heinse was the son of the town clerk in Langewiesen, Johann Nikolaus Heintze and his wife Barbara Katharina Jahn. The Heinses (actually Heintzes) were largely related to the Thuringian artist family Heinsius . After attending school in Langewiesen, Heinse switched to grammar school in Arnstadt , and later to that of Schleusingen . In 1766 he enrolled at the University of Jena for law studies. But from the beginning he neglected this study in favor of his literary interests. Two years later he followed his teacher Friedrich Justus Riedel to the University of Erfurt . Riedel supported Heinse during his studies, but also benefited from his help in writing his pamphlets .

Heinse made the acquaintance of Christoph Martin Wieland through Riedel . Through the advocacy of Wieland, Johann Wilhelm Ludwig Gleim accepted him into his Halberstädter poet circle through correspondence . After completing his studies, in the late summer of 1771 he accompanied two former officers on their journey through southern Germany. One of the two was the pamphleteer Count Hermann Woldemar von Schmettau . In September 1772 Heinse came to Gleim in Halberstadt .

Through his mediation, Heinse got a job with the von Massow family as court master from September of the same year . He held this office until his departure in 1774. In April 1774, Heinse was hired by the Jacobi brothers, the poet Johann Georg Jacobi and the philosopher Friedrich Heinrich Jacobi , to edit their women's magazine "Iris" in Düsseldorf. As an employee, he also got to know Minister Johann Wolfgang von Goethe , whom he admired very much. He was also friends with Friedrich Maximilian Klinger and appreciated his play Sturm und Drang . From 1776 to 1777 Heinse published his letters on some paintings in the Düsseldorf gallery in the Teutscher Merkur and thus achieved his literary breakthrough. With these letters , Heinse turned away from Johann Joachim Winckelmann and his views on art.

From July 1780 he went on a trip to Italy. The brothers Jacobi and Papa Gleim played a key role in their financing . Heinse made this trip, which took him through Switzerland to southern France, mostly on foot. In Emmendingen , Baden-Württemberg , he visited Goethe's brother-in-law, the Oberamtmann Johann Georg Schlosser . Later he came via Avignon and Nice , mostly along the coast, to the Gulf of Naples . Heinse only stayed longer in Venice , Florence and Rome .

In Rome he met Friedrich Müller, known as the painter Müller , who introduced him to the art and history of the city. Heinse processes his impressions in his novel Ardinghello , which he published in 1786. With this work, 30 years before the publication of Goethe's Italian Journey , he gave German readers a new perspective on Italy: The Renaissance was equated with Roman antiquity .

Heinse returned to Germany in September 1783. According to an idea by painter Müller, a cultural magazine was to be created there under his direction, in which Joseph Anton Siegmund von Beroldingen , a canon from Speyer , was to participate. As the project could not be realized for cost reasons, Heinse went to Düsseldorf . In Mainz he got a job in 1786 as a reader of the Archbishop of Mainz, Elector Friedrich Karl Joseph von Erthal . Later he advanced to the position of archbishop librarian.

The elector awarded Heinse the title of court counselor and promoted him to professor. Erthal's successor, Baron Karl Theodor von Dalberg , had his private library managed by Heinse. Years of close cooperation with these church princes led to the false claim that Heinse had converted . As a librarian, Heinse was Georg Forster's colleague for several years . Heinse did not get along with this, since Forster was an ardent supporter of the French Revolution , while he himself vehemently rejected it. In his Mainz years, Heinse cultivated the friendship with the physician Samuel Thomas Soemmerring and also met with Goethe on the occasion of some excursions to the Lower Rhine.

In 1792 Mainz was occupied by the French army. During the siege of Mainz in the following year, the electoral court fled to Aschaffenburg . The archbishop's private library was also brought there to safety under Heines's direction. Heinse then worked as a librarian at the Aschaffenburg court library until the end of his life . In the summer of 1796 Heinse spent some time in Kassel and Bad Driburg , together with Friedrich Hölderlin and Susette Gontard .

Johann Jakob Wilhelm Heinse died on June 22, 1803 in Aschaffenburg at the age of 57. His grave is there in the old town cemetery. With a bust, begun by Johann Nepomuk Haller and completed by Ernst Mayer , he is honored as a German poet in the Walhalla (near Donaustauf in the district of Regensburg ).

With his novel Laidion , Heinse stepped out of Gleim's literary shadow. He reached his linguistically high form almost 15 years later with his letter novel Ardinghello (1787). This work, as Heinses best known, had a direct influence on Romanticism , even if the reception at the time was apparently low.

In his two-volume novel Anastasia und das Schachspiel (1803) Heinse used the analyzes of the Italian chess master Giambattista Lolli . According to his own statements, this work was very dear to him because, as a good chess player, he was able to express his views on the game of chess with it. Even today, Heinses novel Hildegard von Hohenthal is important for the history of music, as it contains a history of Italian opera . For chess and music, Heinse was also an admirer of François-André Danican Philidor .

Writings and editions of works