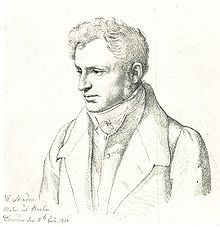 Joseph's interpretation of dreams in prison

Vestibule in Schadow's house in Düsseldorf, in the background Schadow with a visitor, watercolor by Rudolf Wiegmann , 1836

Wilhelm von Schadow in his studio , drawing by Henry Ritter , 1845

Friedrich Wilhelm von Schadow (born September 6, 1788 in Berlin , † March 19, 1862 in Düsseldorf ) was a German painter . Together with the Nazarene Peter von Cornelius , he founded the Düsseldorf School of Painting .

Wilhelm Schadow was the son of the sculptor Johann Gottfried Schadow and his wife Marianne (1758–1815), daughter of the Jewish Viennese jeweler Samuel Devidels (1731–1790). Schadow received his first artistic lessons from his father. At the age of 20 he trained at the Academy of Arts , where he became a student of Friedrich Georg Weitsch and Karl Wilhelm Wach .

As early as 1806, Schadow took part in a large academy exhibition with a portrait of the singer Julie Zelter . Schadow presented the wife of Carl Friedrich Zelter (nee Pappritz) as Saint Cecilia in the style of John Flaxman . Between 1806 and 1807 Schadow served in the Prussian army as a "voluntary one year old".

In 1810 Schadow successfully completed his studies at the academy and went to Italy with his brother, the sculptor Rudolf Schadow . There he had contact with the Danish sculptor Bertel Thorvaldsen . Through this, Schadow soon came into contact with the circle of artists around Caroline von Humboldt . He was very impressed by the Nazarenes Peter von Cornelius , Friedrich Overbeck , Philipp Veit and Karl Wilhelm Wach and joined this group - now known as the Lukasbund - in 1813.

Through the influence of Friedrich Overbeck, Schadow converted from Protestant to Catholic in 1814. During his stay in Rome, he mostly painted religious monumental paintings in the academic-classical style. Between 1816 and 1818 Schadow was involved in decorating the Villa Bartholdy together with Cornelius, Overbeck and Veit . In the summer of 1819, Schadow returned to Berlin at the request of Karl Friedrich Schinkel ; He was accompanied by Karl Wilhelm Wach. Schadow became a lecturer at the Berlin Art Academy and taught there until 1826.

In 1822 and 1825, Schadow headed a large studio in Berlin that - supported by the king - attracted many students. At the end of 1825 he gave up this job and closed his studio because the Prussian minister of culture, Karl vom Stein zum Altenstein, had appointed him director of the Düsseldorf Art Academy . At the beginning of 1826 he began his service there as the successor to Peter von Cornelius .

Under Wilhelm von Schadow, the Düsseldorf Art Academy developed into a hub for new artistic ideas and inspiration. This included the form of teaching, the close relationship between masters and students as well as the thematic and artistic style expressed unity of poetry and nature. The success of the academy was due to the fact that von Schadow's best students, who came from Berlin in 1826, followed him to the Rhine: Theodor Hildebrandt , Eduard Bendemann , Julius Huebner , Carl Friedrich Lessing , Christian Köhler , Heinrich Mücke and Karl Ferdinand Sohn . The Düsseldorf School of Painting was established after a short time .

Schadow caused a sensation with one of his first Düsseldorf pictures, the depiction of the " Mignon " after " Wilhelm Meister " by Johann Wolfgang von Goethe , for which the young actress Constance Le Gaye had sat for him.

Commissioned by Naumburg canon Immanuel Christian Leberecht von Ampach , the painting Christ among the Pharisees , also known as Christ, explaining the law for the Christ cycle in Naumburg Cathedral, was painted again in Germany in 1827 .

In his capacity as director of the academy, Schadow was instrumental in improving art studies and the associated practical training. In his "Thoughts on the Consistent Training of the Painter" , printed in 1828 , he publicly presented the principles of his conception of art and didactics that were widely observed . In 1829 he helped found the art association for the Rhineland and Westphalia . Schadow stayed in Rome between 1830 and 1831 and later again from 1839 to 1840 . From these trips he brought back many sketches and ideas that formed the basis of his further artistic work in the studio. Following his trip to Italy in 1830/31, Schadow carried out a reform of the academy, which provided for a three-stage training course for the pupils consisting of elementary class, preparatory class and class of practicing students, with the last stage being the decisive innovation, because after learning the basics, the creative skills and independent work was promoted. The best graduates were then able to attend the so-called master class . They were given their own studios in the academy building , so that they remained connected to the art academy as role models for the next generation.

1842 Schadow was from the University of Bonn with the title Dr. phil. hc honored. In 1843 or 1845 he was raised to the Prussian nobility as "von Schadow-Godenhaus". The addition "Godenhaus" came from the Godenhaus manor near Sinzig . According to the certificate of appointment, the title was officially called "Ritter Schadow von Godenhaus".

Schadow's last major work was created between 1850 and 1854: a triptych with the allegorical representation of "Heaven, Purgatory and Hell". He was inspired by the reading of Dante's " Divine Comedy ". Due to a serious eye problem, he had to pause again and again, and only after an operation could these three pictures be completed for a hall of the Düsseldorf Regional Court.

When Schadow had his service anniversary at the art academy after 25 years, the artists of the paint box celebrated him on November 30, 1851 with a Schadowfest. On this occasion the Flinger Steinweg was renamed Schadowstraße . On this occasion, he was also honored an artist album. 70 former Schadow students from A for Andreas Achenbach to Z for Julius Zielke had provided a drawing or sketch for this. Adolf Schroedter was represented with two pictures, so there were 71 sheets that are combined in the album and that reflect the Düsseldorf scene of the time.

In 1857, shortly before his 69th birthday, Schadow suffered a stroke from which he did not recover. Two years later, he resigned from all offices and retired into private life. At the age of 73, Schadow died on March 19, 1862 at Hofgartenstrasse 8, in the house of his daughter Sophie and her husband Richard Hasenclever, and was buried in the Golzheim cemetery , as was their daughter Anna Maria, who had only lived a few months before ( * March 10, 1828 - † July 27, 1828).

In his honor in Düsseldorf, Schadowstrasse , formerly Flinger Steinweg, was named, in which he had Rudolf Wiegmann build his house, completed in 1838 (Steinweg 212 4/20, since 1856 Schadowstrasse the corner house 54 and neighboring house 56), the Schadowplatz with the Schadow- Monument and the Schadow Arkaden after him. Since the late 1890s, his name has been emblazoned on the left above the main portal of the art academy building . 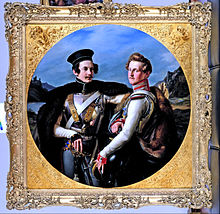 Schadow's painting style was based on the old masters of the Quattrocento as well as the old German and old Dutch painting. His works stand out from the more formal and linear painting style of the rest of the Nazarenes because of their naturalness and pronounced colorism. The term fine painting is not infrequently used to denote his painting style . This style was characterized by a correct, strict drawing, enamel-like surfaces using fine, smooth application of paint, a clear and simple image structure, a geometrical abstraction of the individual form as well as the exact reproduction of realistic details with an overall idealized understanding of the depicted. He often painted individual figures that were conceived as monumental. In this way he was soon able to make a name for himself as a sought-after portrait painter.

Tomb of W. von Schadow in the Golzheim cemetery , photo from 1911